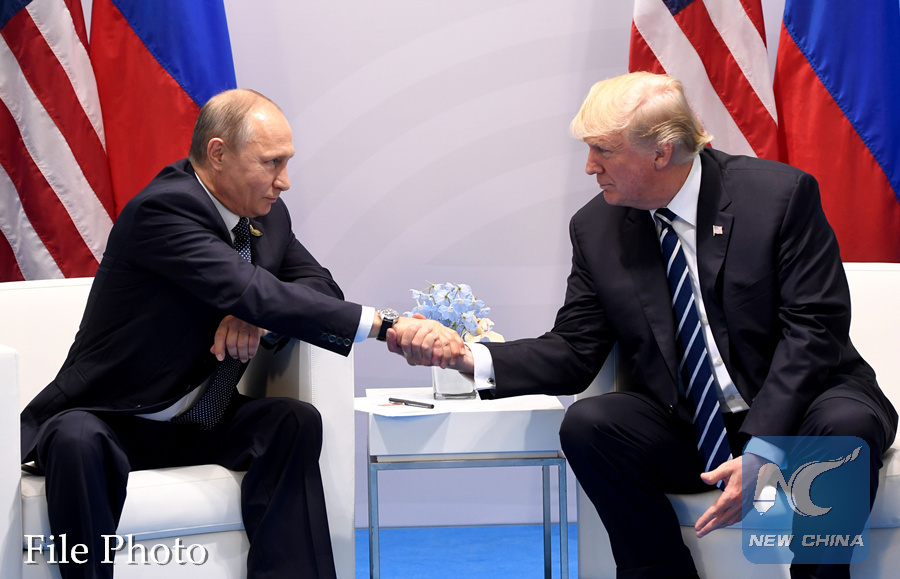 US President Donald Trump shakes hands with Russia's President Vladimir Putin during their bilateral meeting at the G20 summit in Hamburg, Germany July 7, 2017.

"The release of the 'Kremlin list', which includes practically the entire Russian administration and heads of leading state corporations, undermines the possibility of further dialogue, which is already at its lowest," Leonid Slutsky, Chairman of the Russian State Duma's Foreign Affairs Committee, was quoted by Interfax news agency.

Echoing Slutsky's remarks, First Deputy Chairman of the Federation Council upper parliament house's Defense and Security Committee Franz Klintsevich said that the United States "have brutally violated all the principles of international relations and made cooperation with Russia practically impossible."

"This will actually last for a long while. It appears that political paranoia is rather hard to cure especially if the patient denies his disease and refuses treatment," Konstantin Kosachyov, chairman of the Foreign Affairs Committee of the Russian Federation Council (the upper house of parliament) was quoted by Interfax news agency as saying.

However, US sanctions have not resulted in a change in the political course of Russia, weakening of its sovereignty or internal disunity, Vyacheslav Volodin, the speaker of the State Duma said in a statement.

"New sanctions against Russia will lead to an even greater consolidation of society," Volodin said.

Russian Deputy Prime Minister Arkady Dvorkovich said that Russia will monitor the situation and will take necessary measures in response if finds it necessary.

"At the moment there are no reasons to take actions," he added.

Late Monday, the US Treasury Department published a list of 114 Russian politicians and 96 business leaders widely seen as potential targets for new sanctions, although the document specifies that it should not be interpreted as a sanction list.

According to the Treasury, each figure in the "Kremlin report" has an estimated net worth of 1 billion US dollars.

Drafted on the basis of the US legislation six months ago, the "Kremlin report" also has classified annexes, which include individuals with a lower official position or with a net worth below 1 billion dollars, as well as companies with state ownership of at least 25 percent and with 2016 revenues of 2 billion dollars or more.