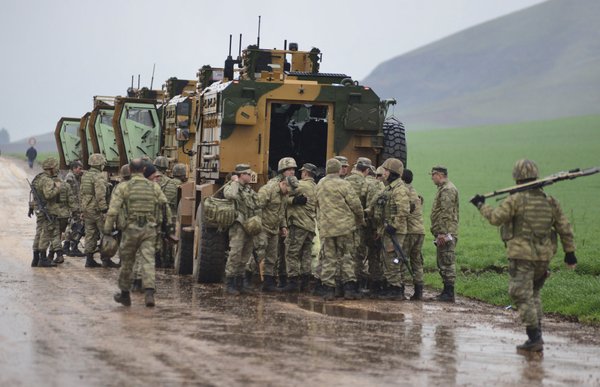 Turkish Army soldiers form a convoy of armoured personnel carriers near the border with Syria, in the outskirts of Hassa, Turkey, Tuesday, January 23, 2018. Turkey's Foreign Minister Mevlut Cavusoglu has announced that a second Turkish soldier has been killed in action in Turkey's military offensive on a Kurdish-held enclave in northern Syria. (Photo: AP)

"The first thing is to find out what the talk is about, as the United States in such situations can behave in a strictly antipodal manner," Lavrov said at a press conference with his counterpart from Oman, Yusuf bin Alawi bin Abdullah.

Trump tweeted Sunday asking Britain, France, Germany and other European allies to take back over 800 IS militants the United States had captured in Syria and to put them on trial, as the United States intended to pull out its military from Syria after the destruction of IS.

"The alternative is not a good one in that we will be forced to release them. The US does not want to watch as these IS fighters permeate Europe, which is where they are expected to go," Trump said.

Lavrov recalled that previously the United States either sent such individuals captured in Afghanistan and other countries to its Guantanamo base in Cuba to be kept for years, without trial or investigation, or to secret CIA prisons in eastern Europe.

He also noted that captured foreign militants were suspected of terrorism, for which the United Nations (UN) Security Council's resolutions contained a "very clear list of steps that need to be taken" against them, when they fall into the hands of countries fighting against terrorists.

"These criteria must be met, and the first absolutely essential step is transparency and the transfer of data about these individuals," Lavrov said.

He also said that, besides setting up prisons for terrorists, the United States has created a lot of problems on the eastern bank of the Euphrates, and it would not be an easy job to sort them out.

These included military bases and weapons the United States supplied to local Kurds, the fate of which worries Turkey greatly, Lavrov said.

But the main problem, said Lavrov, was the illegitimately created security zone in al-Tanf in southeastern Syria, where the U.S. military trained militants, and Rukban refugee camp. The dwellers of that camp could not be evacuated because of a ban imposed by the United States and extremists backed by it.

Lavrov said he hoped that UN representatives who had recently accompanied the second humanitarian convoy to Rukban could see by themselves what was happening there, and provide the necessary information to the UN Security Council.