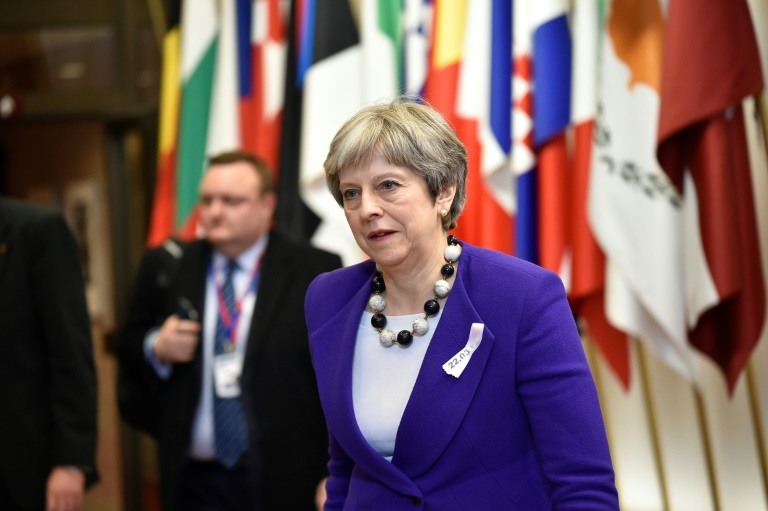 EU leaders have united behind British Prime Minister Theresa May in blaming Russia for a nerve agent attack on former double agent and his daughter in England (Photo: AFP)

Russia on Friday accused Britain of trying to force its allies to take "confrontational steps" after EU member states decided to recall the bloc's envoy from Moscow and mulled further diplomatic action over a nerve attack row.

Foreign Minister Sergei Lavrov slammed Britain for garnering EU support over the poisoning of a former double agent, suggesting that London's focus was now on making "the crisis with Russia as deep as possible".

At a summit in Brussels, EU leaders united behind British Prime Minister Theresa May in blaming Russia for the nerve agent attack on former spy Sergei Skripal and his daughter in England, and agreed to recall their ambassador to Moscow for consultations.

"As for the decision taken, we regret in this context that again such decisions are taken using the wording 'highly likely'," President Vladimir Putin's spokesman Dmitry Peskov told reporters.

"We don't agree with this and we repeat again that Russia absolutely definitely has nothing to do with the Skripal case."

"We still do not see any facts," state news agency RIA Novosti quoted him as saying on a visit to Hanoi.

"The absence of which makes one think that all of this is a provocation, the investigation has not even been finished yet."

In a televised address, Putin thanked Russians for giving him the "highest level of support in the history of our country" in Sunday's elections and urged the nation to come together amid the "difficult internal and external challenges we face."

May had pressed the importance of a united response to the March 4 poisoning and the EU leaders in Brussels offered her their full support, agreeing in a statement "that it is highly likely that the Russian Federation is responsible and that there is no plausible alternative explanation".

The Skripals are both in a coma after being found collapsed on a park bench, although a policeman who was also contaminated was released from hospital on Thursday.

The Kremlin has angrily rejected Britain's claims and Russian officials have offered numerous alternative explanations, including that London directed the attack itself or that Washington may have been involved.

Britain expelled 23 Russian diplomats they said were spies, and Russia responded in kind, also halting the activities of the British Council cultural and educational organisation.

Earlier Friday, British diplomats left their Moscow mission in several minibuses and the remaining diplomatic staff sent them off with a round of applause, Russian television showed.

More diplomatic staff could still be sent home, with several EU members saying they are considering expelling their own Russian diplomats.

"I think national measures will be applied already starting from next week... from a lot of countries," Lithuania's President Dalia Grybauskaite said before joining the second and last day of the summit in Brussels.

"Some countries, like France, are ready for possible measures to be decided at a national level in cooperation with other European countries," the source said.

The United States, France and Germany were first to back the British conclusion that Moscow was to blame for the first offensive use of a nerve agent in Europe since World War II.

But Britain's efforts to win a tough line from the other 27 EU members ran up against countries keen to protect their Kremlin ties, notably Greece and Italy.

The leaders of the Czech Republic, Denmark and Ireland all said they were considering further unilateral steps, including expelling diplomats.

Czech Prime Minister Andrej Babis told the CTK news agency that Prague may expel several Russian diplomats over the poisoning of the Skripals.

"Yes, we will probably move in this direction," Babis said, adding he will discuss expulsions with his cabinet members on Monday.

"We are not going to randomly expel people who are genuine diplomats," Varadkar said.

Danish Prime Minister Lars Lokke Rasmussen said his government heard the "strong signal" from the bloc's leaders who agreed with Britain's assessment that Russia was to blame for the attack.

He said he would hold consultations with members of his government about the next steps.