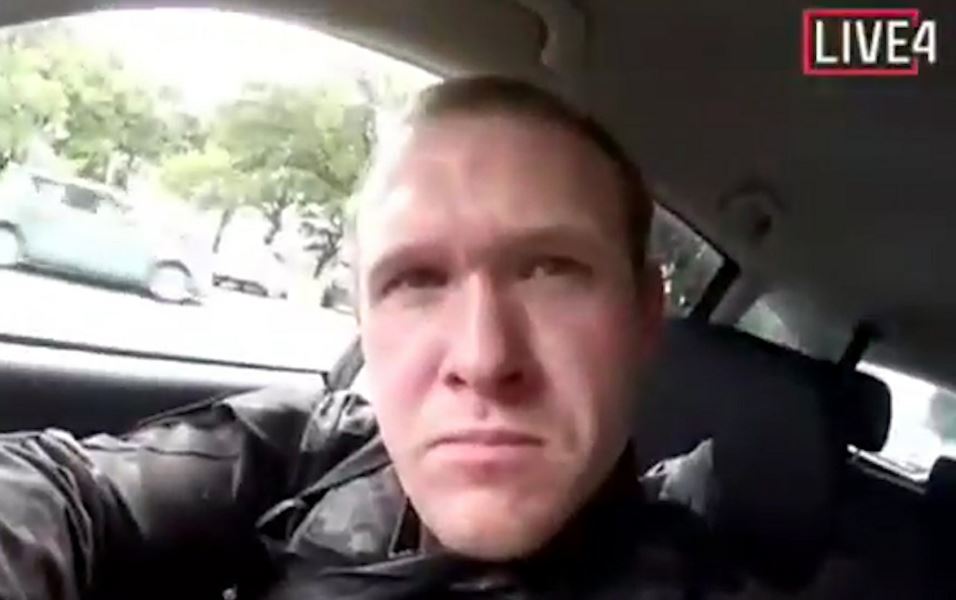 This frame from video that was livestreamed Friday, March 15, 2019, shows a gunman, who used the name Brenton Tarrant on social media, in a car before the mosque shootings in Christchurch, New Zealand. (Photo: AP)

The gunman behind at least one of the mosque shootings in New Zealand that left 49 people dead on Friday tried to make a few things clear in the manifesto he left behind: He is a 28-year-old Australian white nationalist who hates immigrants. He was set off by attacks in Europe that were perpetrated by Muslims. He wanted revenge, and he wanted to create fear.

He also, quite clearly, wanted attention.

Though he claimed not to covet fame, the gunman — whose name was not immediately released by police — left behind a 74-page document posted on social media under the name Brenton Tarrant in which he said he hoped to survive the attack to better spread his ideas in the media.

He also livestreamed to the world in graphic detail his assault on the worshippers at Christchurch’s Al Noor Mosque.

That rampage killed at least 41 people, while an attack on a second mosque in the city not long after killed several more. Police did not say whether the same person was responsible for both shootings.

While his manifesto and video were an obvious and contemptuous ploy for infamy, they do contain important clues for a public trying to understand why anyone would target dozens of innocent people who were simply spending an afternoon engaged in prayer.

There could be no more perplexing a setting for a mass slaughter than New Zealand, a nation so placid and so isolated from the mass shootings that plague the US that even police officers rarely carry guns.

Yet the gunman himself highlighted New Zealand’s remoteness as a reason he chose it. He wrote that an attack in New Zealand would show that no place on earth was safe and that even a country as far away as New Zealand is subject to mass immigration.

He said he grew up in a working-class Australian family, had a typical childhood and was a poor student. A woman who said she was a colleague of his when he worked as a personal trainer in the Australian city of Grafton said she was shocked by the allegations against him.

“I can’t ... believe that somebody I’ve probably had daily dealings with and had shared conversations and interacted with would be able of something to this extreme,” Tracey Gray told the Australian Broadcasting Corp.

Throughout the manifesto, the theme he returns to most often is conflict between people of European descent and Muslims, often framing it in terms of the Crusades.

He wrote that the episode that pushed him toward violence took place in 2017 while he was touring through Western Europe. That was when an Uzbek man drove a truck into a crowd of people in Stockholm, killing five. The Australian was particularly enraged by the death of an 11-year-old Swedish girl in the attack.

He said his desire for violence grew when he arrived in France, where he became enraged by the sight of immigrants in the cities and towns he visited.

And so he began to plot his attack. Three months ago, he started planning to target Christchurch. He claimed not to be a direct member of any organization or group, though he said he has donated to many nationalist groups. He also claimed he contacted an anti-immigration group called the reborn Knights Templar and got the blessing of Anders Breivik for the attack.

Breivik is a right-wing Norwegian extremist who killed 77 people in Oslo and a nearby island in 2011. Breivik’s lawyer Oeystein Storrvik told Norway’s VG newspaper that his client, who is in prison, has “very limited contacts with the surrounding world, so it seems very unlikely that he has had contact” with the New Zealand gunman.

The gunman had a long wish list for what he hoped the attack would achieve. He hoped it would reduce immigration by intimidating immigrants. He hoped to drive a wedge between NATO and the Turkish people. He hoped to further polarize and destabilize the West. And he hoped to create more conflict over gun laws in the US, thus leading to a civil war that would ultimately result in a separation of races.

Though he claimed not to be a Nazi, in the video he livestreamed of the shooting the number 14 is seen on his rifle. That may be a reference to the “14 Words,” a white supremacist slogan attributed in part to Adolf Hitler’s “Mein Kampf,” according to the Southern Poverty Law Center. He also used the symbol of the Schwarze Sonne, or black sun, which “has become synonymous with myriad far-right groups who traffic in neo-Nazi,” according to the center.

And in the video he livestreamed of his shooting, no remorse can be seen or heard. Instead, he simply says: “Let’s get this party started.”

Then he picks up his gun, storms into the mosque, and cuts down one innocent life after another.

When it is over, he climbs back into his car, where he has left his music playing — the song “Fire” by the English rock band The Crazy World of Arthur Brown. And right after the singer bellows, “I am the god of hellfire!” the gunman drives away.