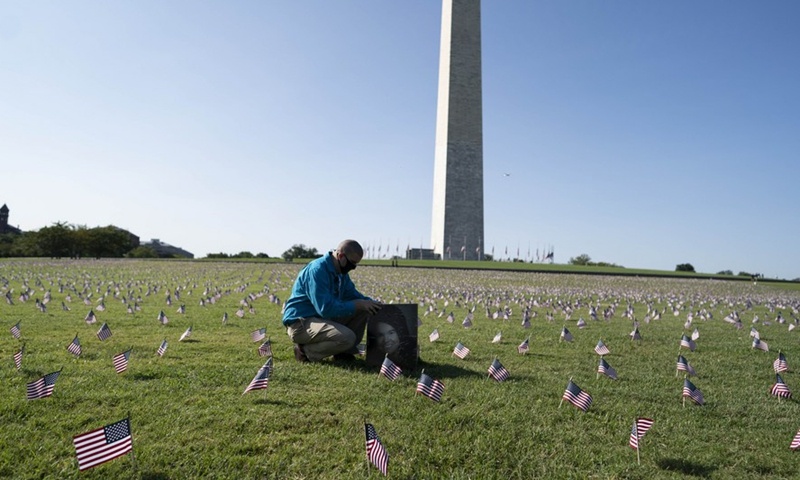 A man is seen with a picture of his family member who died from COVID-19 among U.S. national flags representing the 200,000 lives lost to COVID-19 in the United States placed on the National Mall in Washington, D.C., the United States, on Sept. 22, 2020. (Photos: Xinhua)

A poll from the University of Chicago Harris School of Public Policy found 78 percent of Americans believe that U.S. government policies caused the COVID-19 crisis in the country, including 56 percent who think those policies mattered "a great deal."

Americans are also more likely to say the United States should have a major role in developing a coronavirus vaccine than to say the same about the World Health Organization (WHO), countries in the European Union and China, with the rate being 78 percent, 57 percent, 55 percent and 51 percent, respectively.

Only 57 percent of Americans intend to get a vaccine when it is available, and the figure declines to 46 percent if the vaccine were to be developed outside the United States.

The poll found that 58 percent of Americans, including 79 percent of Republicans, say the United States should keep any vaccine for itself, even if that means fewer around the world get vaccinated. Only 39 percent of Americans say the vaccine should be made immediately available to other countries. 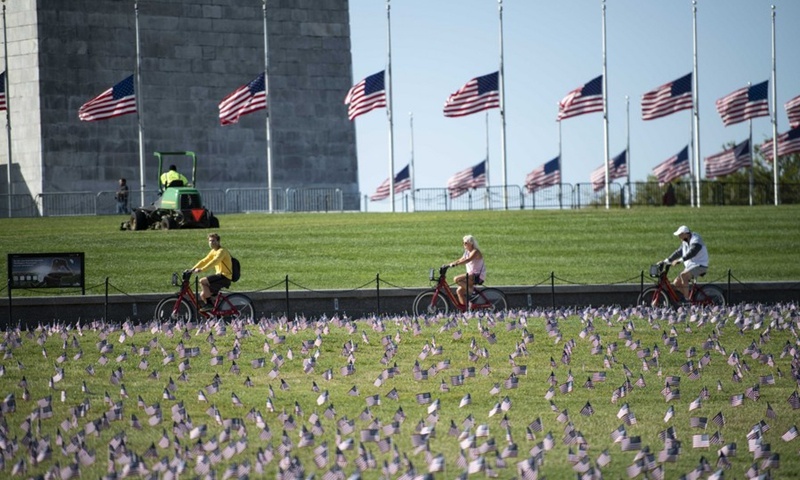 People ride bicycles past U.S. national flags representing the 200,000 lives lost to COVID-19 in the United States placed on the National Mall in Washington, D.C., the United States, on Sept. 22, 2020.

Meanwhile, Republicans are less likely than Democrats to say they will get a vaccine, regardless of whether it is developed in the United States, with the ratio being 42 percent and 70 percent, respectively.

The nationwide poll, conducted with 1,053 adults by the University of Chicago Harris School of Public Policy and the Associated Press-NORC Center for Public Affairs Research during Sept. 11-14, 2020, was released on the eve of the 2020 Pearson Global Forum, an Oct. 6-8 virtual event hosted by Harris Public Policy that brought together researchers and policymakers to develop strategies to prevent and resolve international conflicts.