Most Italian schools reopen as coronavirus infections appear to plateau 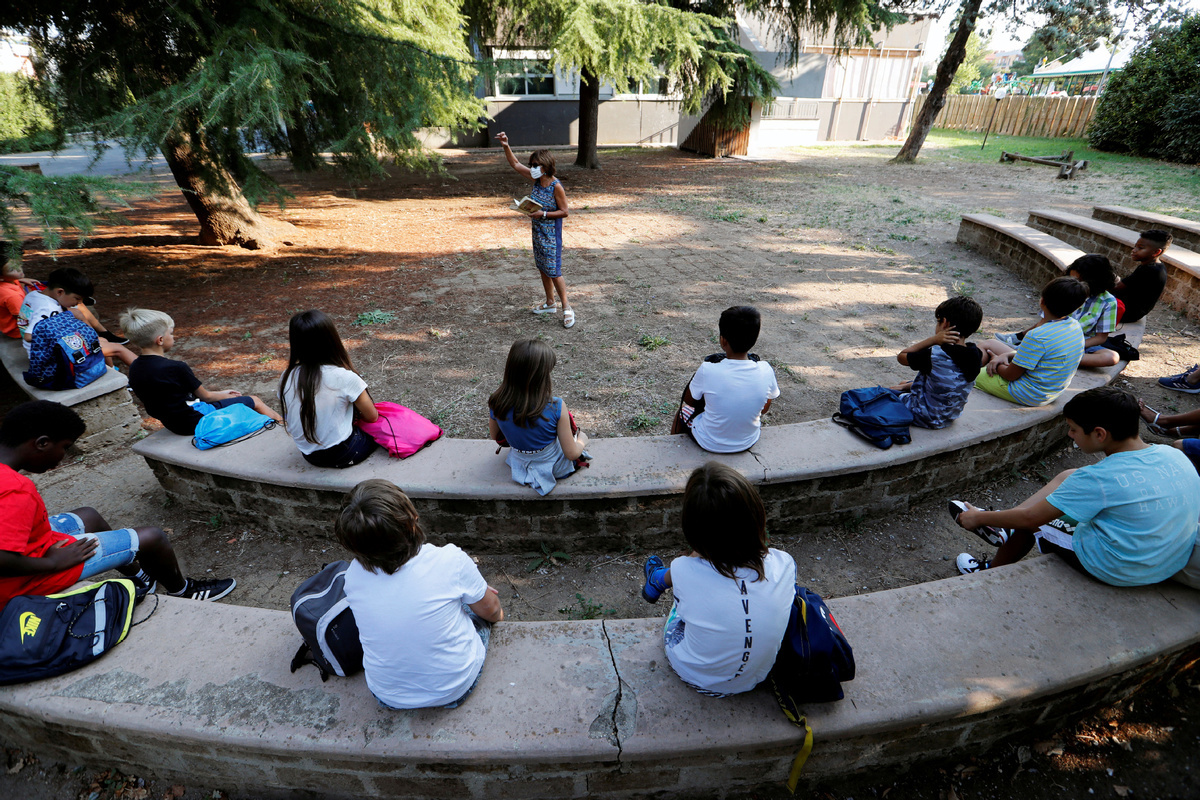 Children attend an open-air lesson as they return to the Simonetta Salacone primary and secondary school for the first time since March, adhering to strict regulations to avoid coronavirus disease (COVID-19) contagion, in Rome, Italy, Sept 14, 2020. [Photo/Agencies]

ROME - The number of new coronavirus cases in Italy appears to have plateaued in recent days, as the majority of Italian schools reopened Monday and former Prime Minister Silvio Berlusconi was sent home to complete his recovery nearly two weeks after first testing positive for the virus.

Around two-thirds of Italy's 8 million students returned to school Monday amid strict social distancing and health regulations created to curb the spread of COVID-19, the disease caused by the novel coronavirus. Most of the rest of the schools opened in the last ten days, with around one in ten, mostly rural schools, scheduled to open at the end of the month.

In an interview with the newspaper La Nazione, virologist Andrea Crisanti said that the next 15 to 20 days will "put Italy's health system to the test" amid the return of students, regional elections later in the month, and cooler weather.

"By October we will know much more than we know now," Crisanti is quoted as saying.

The return to school is the latest in a series of challenges Italy is looking to navigate amid a gradual increase in the country's coronavirus infection rate in recent weeks.

On Monday, Italy recorded 1,008 new coronavirus infections and 14 deaths from COVID-19. That compares to 1,458 and 7, respectively, a day earlier.

The country has now recorded at least 1,000 new infections for 20 out of the 24 days from Aug. 22. Before the start of that period, Italy had not surpassed that level since May 12. But since the increase in the second half of August, the daily infection rate has stayed below 1,500 for all but 4 days, far below peaks of more than 5,000 infections per day in late March and early April, when it was the European epicenter for the pandemic.

The daily mortality rate has stayed relatively low despite the increase in new infections, not surpassing 20 COVID-19 deaths in one day since July 7.

The number of patients in intensive care units was 197, four times the all-time low of 49 recorded in July and 10 patients more than Sunday. The figure has been below 200 consistently since early June.

The total number of recovered patients totaled 213,950, up 316 from the previous day.

The release of Berlusconi from the San Raffaele Hospital in Milan was front-page news across Italy. The four-time prime minister, who will turn 84 later this month, was confirmed on Sept 2 to have tested positive for the virus. Berlusconi is expected to finish his recovery at home for several more days as he prepares Forza Italia, the political party he founded, for the upcoming regional elections.

The government said Monday that the reopening of dance halls and the right of sports fans to attend games in person were still at least a month away. The government also delayed a decision on whether to allow trains to travel at 80 percent capacity compared with 50-percent under current rules.

Paolo Savona, the 83-year-old president of Italy's main markets and securities regular CONSOB (Italian Companies and Exchange Commission), tested positive for the coronavirus over the weekend. He is reported to be asymptomatic, and his entire staff has been tested and put under quarantine as a precaution.