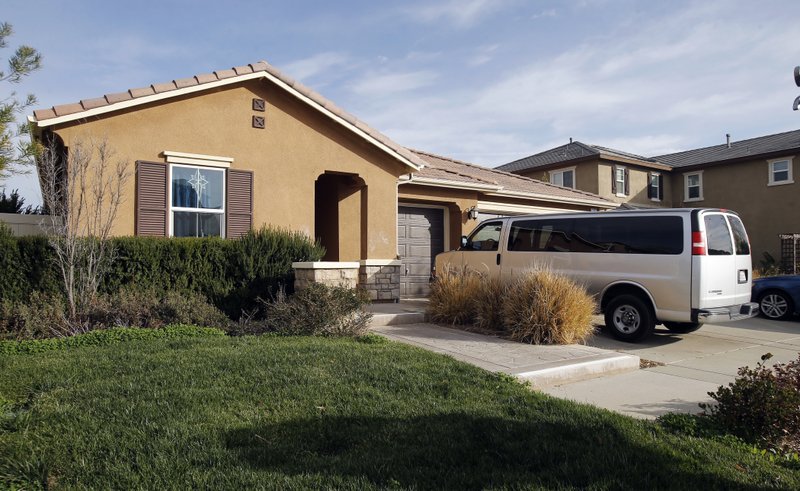 The Latest on family members found shackled in a California home (all times local):

California authorities say the mother of 13 children kept locked in filthy conditions was “perplexed” about why police came to their home.

The children, some of them chained to furniture, were described as weak and small for their age. Fellows called it torture. The abuse was discovered when a 17-year-old girl jumped out a window and called 911 Sunday.

The sheriff’s captain says deputies had never been to the home and neither had social service workers.

Corona Regional Medical Center CEO Mark Uffer says his facility is treating seven of the adult children. Uffer says they are small and clearly malnourished but are stable and very friendly.

The father of a California man accused of keeping his 13 children locked up in filthy conditions says he was surprised by news of his son’s arrest.

James Turpin of Princeton, West Virginia, told The Associated Press Tuesday that all 13 children are David Turpin’s biological kids. He said none are adopted.

Fifty-seven-year-old David Turpin and his 49-year-old wife, Louise Turpin, were arrested Sunday on suspicion of torture and child endangerment.  A court appearance is set for Thursday.

The older Turpin said he heard about the arrests Monday but declined further comment.

James Turpin confirmed that his son is an engineer. He told WVNS-TV in Ghent, West Virginia, that David grew up in West Virginia.

Investigators say the 13 brothers and sisters had been malnourished and that several children were shackled to beds.

This item has been corrected to show the TV station attribution should be WVNS-TV in Ghent, West Virginia, not WTRF-TV in Wheeling, West Virginia.

A 17-year-old girl called police after escaping from her family’s home where she and her 12 brothers and sisters were locked up in filthy conditions, some so malnourished officers at first believed all were children even though seven are adults.

Police went to the family home in Perris, about 70 miles southeast of Los Angeles on Sunday. The Riverside County Sheriff’s Department says deputies found several children shackled to their beds with chains and padlocks in dark, foul-smelling surroundings.

Fifty-seven-year-old David Allen Turpin and 49-year-old Louise Anna Turpin each were held on $9 million bail. They could face charges including torture and child endangerment.

It wasn’t immediately known if they had attorneys.