The mothers of two Myanmar men sentenced to death for the murder of a pair of British backpackers in Thailand submitted a plea for clemency from the Thai king Thursday, in a case tainted by claims of irregularities. 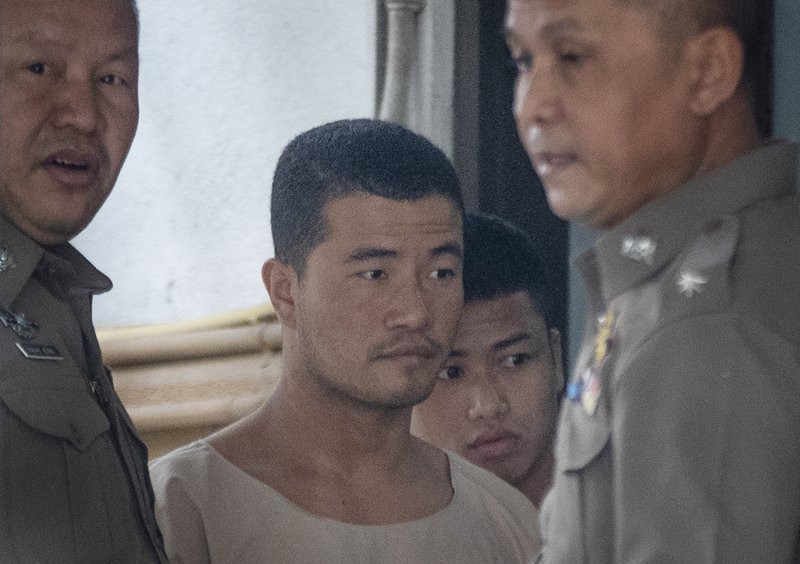 Myanmar nationals Wai Phyo, second left, and Zaw Lin, second right, are escorted by police officers at Supreme Court in Bangkok, Thailand, Thursday, Aug. 29, 2019. The court has upheld the 2015 conviction of the two Myanmar migrants sentenced to death for the murder of two British backpackers on a resort island in 2014. (AP Photo/Sakchai Lalit)

Myanmar migrant workers Zaw Lin and Wai Phyo -- also known as Win Zaw Tun -- were sentenced to death by Thai courts for the rape and murder of Hannah Witheridge, 23, and the killing of David Miller, 24.

Their battered bodies were found on a beach in the diving resort island of Koh Tao in September 2014.

Defence lawyers have said the evidence used to convict the two men were unreliable as authorities had mishandled DNA and did not allow independent analysis of the samples.

They also say confessions by the pair were obtained under duress.

Defence appeals were exhausted in August and a royal pardon or commutation of the death sentence by the Thai king is the last chance of a reprieve.

"We are not challenging the judgement. We are saying that... by giving them the death penalty, they will lose the opportunity to do something good with their lives," lawyer Nadthasiri Bergman said.

She joined the mothers of the two men, and Myanmar embassy officials, to submit the request at the sprawling Bangkok prison where they are being held.

"They deserve a second chance," she added.

In the request Zaw Lin and Win Zaw Tun have pleaded for "compassion from the king," Andy Hall, advisor to the legal defence team, added.

The original verdicts on the 2014 double killing divided relatives of the victims.

Miller's parents backed the court's decision, but the family of Witheridge were more cautious, with her sister saying she believed the investigation had been "bungled".

The case has triggered a strong reaction from Myanmar, where many felt the two men had been given an unfair trial as low-paid migrant workers -- an integral part of Thailand's workforce -- are often regarded with contempt by its public.

The police were accused of buckling under pressure to solve a crime that attracted global attention.

Zaw Lin's brother who was working alongside him in Thailand at the time of the murder said earlier this month that the two were simply used as "scapegoats" to save Thailand's image.

"Hearing the judge give him (Zaw Lin) the death sentence was horrific," Maung Zaw Win told AFP at their family home in western Rakhine State -- one of Myanmar's most impoverished.

"I ask the Thai King to show kindness to them, to show them humanity," he added.

It is unclear when the sentence will be carried out, with hundreds remaining on death row.

But last year Thailand carried out its first execution since 2009, prompting criticism by rights groups who had hoped the country was moving towards abolishing the practice.