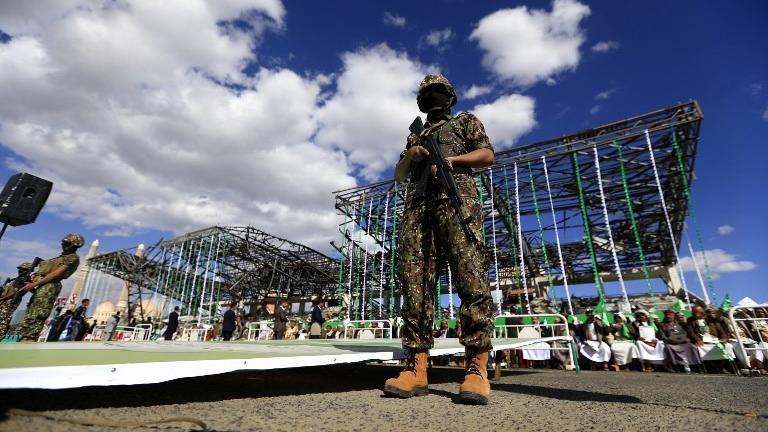 In this Nov 20, 2018 photo, a Yemeni fighter, loyal to the Shi'ite Houthi movement, secure a rally marking the birth anniversary of Islam's Prophet Mohammad in the capital Sanaa. (Photo: AFP)

The government official, who asked to remain anonymous, said that a blast caused by an explosives-laden motorbike parked near a restaurant killed six civilians and injured 26 others in the government-controlled Mocha city.

The blast took place around 7:45 p.m. local time while many people were gathering to have their dinner in public restaurant, the source said.

It was not immediately clear if pro-government military soldiers or officials were the target in the motorcycle bombing.

Local residents said in a telephone interview that the small medical center in Mocha was overwhelmed with the wounded, most of them in critical condition.

No one immediately claimed responsibility for the motorcycle blast. Pro-government security forces launched an investigation into the incident.

The impoverished Arab country has been locked into a civil war since the Shiite Houthi rebels overran much of the country militarily and seized all northern provinces, including capital Sanaa, in 2014.

Saudi Arabia leads an Arab military coalition that intervened in Yemen in 2015 to support the government of Yemeni President Abd-Rabbu Mansour Hadi after the Houthis forced him into exile.