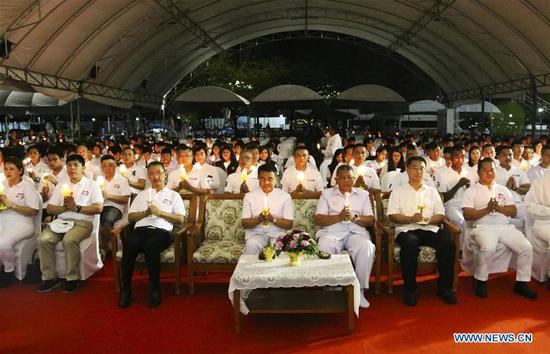 The mourning ceremony was held on Wednesday at Saphan Hin public park in Phuket's provincial capital and presided over by Deputy Provincial Governor Prakob Wongmaneerung.

He expressed condolences on the deaths of the 47 Chinese tourists after a tourist boat, Phoenix, capsized in a storm off Phuket's northeastern coast on July 5.

According to the tourism minister, compensations have almost been completely provided to the relatives of the victims.

In addition, walk-and-run marathons as well as other activities were organized on Thursday with a view to strengthening the relationship between Thailand and China under the "Thai and Chinese are brothers and sisters" slogan.

As part of the morale-boosting activity, a vegetarian dining, prayers and meditation as well as a candle-lit ceremony were held in honor of those who died in the boat accident.

The Phuket provincial government said safety measures are being stepped up to restore the confidence of tourists to the southern Thai island resort.