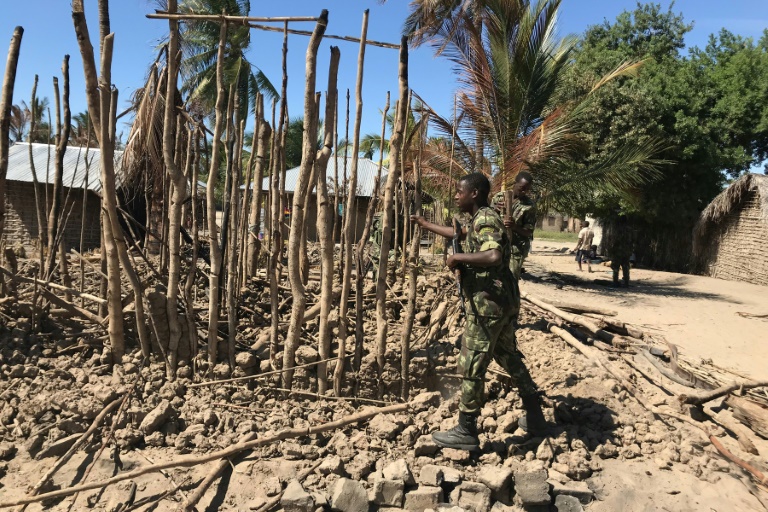 Jihadists have attacked a string of villages in northern Mozambique where the country's future gas hub is to be built (Photo: AFP)

An unprecedented wave of jihadist attacks in northern Mozambique has raised fears the country will fail to fully cash in on a gas bonanza.

After 180 trillion cubic feet (5.1 trillion cubic metres) of natural gas were discovered off the northeastern shore, Mozambique entertained dreams of following Qatar down the path towards wealth. The government even predicted that by 2035, GDP per head could increase sevenfold.

But the southeast African country's golden vision has been thrown into doubt by an explosion of bloodthirsty assaults by a shadowy jihadist group in the region where the industry plans to base its hub.

Since October, more than 30 people have been killed in brazen assaults on unarmed villagers.

Security forces have rushed reinforcements to the area yet seem powerless to stem the attacks. Terrorised, many civilians have fled their homes and a cloud hangs over the great expansion plans.

US oil and gas giant Anadarko, the largest exploration company in the region, has invested $4 billion (3.4 billion euros) so far -- it plans to put in $20 billion over the lifetime of the gasfields.

But following a US embassy alert on June 8 that warned of an imminent attack on the regional gas hub Palma, Anadarko temporarily suspended some activities and moved affected workers and contractors to a secure site.

Canada's Wentworth Resources has already suffered delays to its projects as a result of the insecurity, forcing it to seek a year-long extension for its initial exploration.

In its successful application to the authorities, Wentworth said the attacks had "prevented safe access to the area for Wentworth staff and contractors".

'No threats specific to project'

There have been more than 10 attacks on villages since October, featuring beheadings and arson. None has targeted gas operations.

"Due to the attacks, we took additional measures to protect not only the oil and gas companies operating in that area, but also to protect the communities," said Joaquim Sive, the police commander in Cabo Delgado.

Eric Morier-Genoud, a researcher at Queen's University Belfast, said any attack against the gas "majors" would be an "escalation from which the jihadists would come out the losers".

"At this point... based on the information we have, we classify the attacks as an insignificant risk to the economy," Rogerio Zandamela, the governor of Mozambique's central bank, told AFP.

In contrast, the central bank did consider a spate of attacks carried out by a militia loyal to the main opposition Renamo party in the country's centre in 2015 and 2016 as an economic risk.

"There was much more clarity about the conflict in central Mozambique... We cannot equate the north with the south," Zandamela said. "The information available on the conflict in Cabo Delgado is very limited."

Police have stepped up security around gas projects -- particularly those close to areas that have come under attack, national police spokesman Inacio Dina told AFP.

An official at Anadarko, who declined to be named, said "There have been no threats specific to our project. However, it is a cause for concern, and therefore, as operations continue, we have undertaken appropriate measures."

The company has a gas operations camp in a forest on the Afungi Peninsula.

Police and army units have established a command post in the forest following the attacks.

But a source at Anadarko told AFP that the firm has also stepped up its own security efforts, increasing a private protection force by two-thirds -- a move that will have an impact on costs.

Despite such problems, foreign investors for now still have a big appetite for a share of Mozambique's gas treasures.

Japan's Tokyo Gas and Britain's Centrica inked supply deals with Anadarko on June 15 -- just a day after a machete attack on the village of Ibu.

Even so, experts say the instability in the northeast could still prove costly, cutting into the dividend that Mozambique expects from the huge find.

"(The gas projects) are at risk in their early stages, as attacks can adversely affect logistics. Materials must reach Palma by land," said Maputo-based political science researcher Joao Pereira.

"The insurgency is most likely to delay rather than derail development of the sector," said Ed Hobey-Hamsher, an analyst at global risk consultancy Verisk Maplecroft.

"Attacks will certainly make the investment more expensive because of security needs reducing revenues for the state."