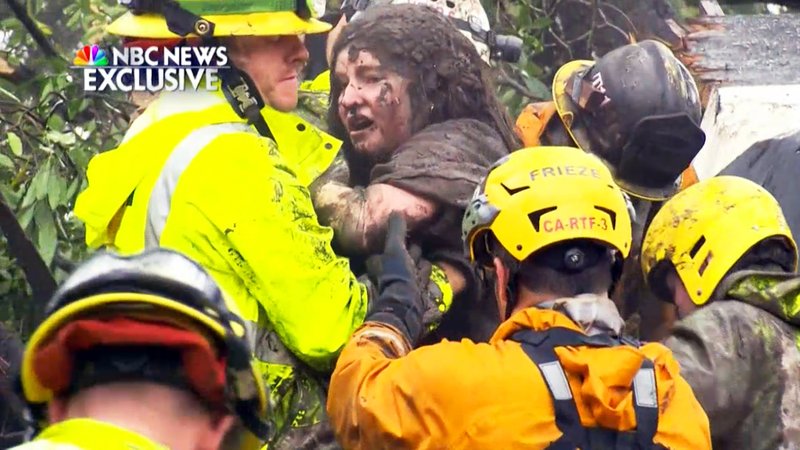 This frame from video provided by NBC News shows the rescue of 14-year-old Lauren Cantin. (NBC News via AP)

One of the victims of Southern California’s deadly mudslides had just enough time to shout to his partner to grab onto something and try to save himself as both were swept out of their home. The man died but his partner survived with only minor injuries.

Theirs is just one story of those who perished and those who managed with inexplicable good fortune to survive the slides in the wealthy enclave of Montecito that killed at least 17 people.

Other victims included a father who died while his daughter survived and a man who perished hours after celebrating his 89th birthday.

Here are theirs stories.

Peter Fleurat was at home with his partner of 17 years during Tuesday's violent storm when the couple felt the floor beneath them shake and roll.

Moments later, a wall of mud burst through their walls and swept him and Ralph “Lalo” Barajas away.

“The last thing Peter yelled out to me was, ‘Lalo, grab onto some wood and don't let go,’” Barajas told CBS News. “That was the last I heard of him.”

Barajas was rescued, treated for cuts, bruises and a sprained neck and released from a Santa Barbara hospital. He searched for his partner until he got the news that he had died.

Barajas is the owner of The Rose, a popular Mexican restaurant in Santa Barbara, and his niece, Angelique Barajas, responded to offers of help from customers by launching a GoFundMe page for him.

She said her uncle will need money to replace his home and possessions — and to bury his partner.

Jim and Alice Mitchell had been married for more than 50 years and had just celebrated Jim’s 89th birthday when they were swept away along with their dog Gigi. 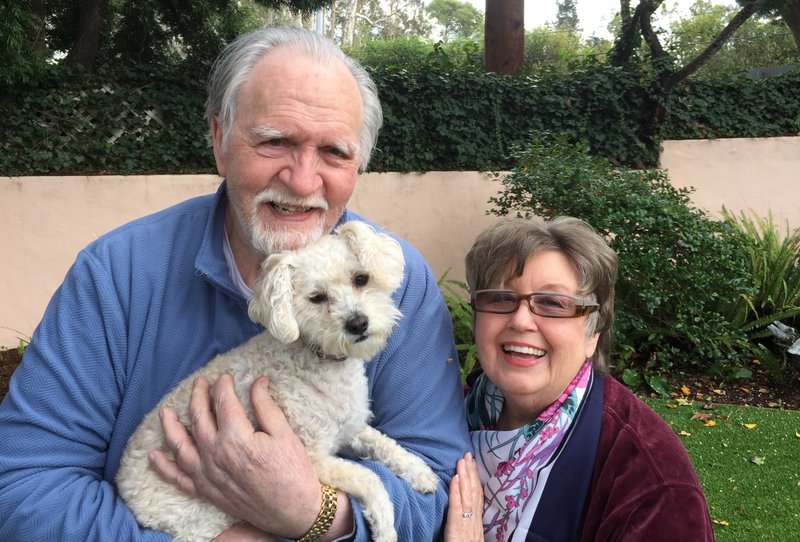 This January, 2017, photo provided by Kelly Weimer, shows Jim Mitchell, 89, with his wife, Alice Mitchell, 78, and their dog, Gigi. The Mitchell’s and their dog have been missing since Tuesday, Jan. 9, 2018, when their Montecito, Calif., home was swept away by the torrent of mud, trees and boulders that flowed down a fire-scarred mountain and slammed into the coastal town in Santa Barbara County. (Kelly Weimer via AP)

Jim, who worked in labor relations, and Alice, a schoolteacher, had moved to Montecito in 1995 after raising their two children in Southern California’s Orange County.

“They’re an adorable couple, and they were in love with their house,” their daughter, Kelly Weimer, said Wednesday before learning they had died.

She last spoke to them Monday when she called to wish her father a happy birthday.

The couple had planned to stay at home the night of the storm and have a quiet dinner. Their grandson had taken them out to celebrate the day before.

The Mitchells are survived by their two children, six grandchildren and two great-grandchildren.

Rebecca Riskin was the picture of success and health before she was killed.

Her firm, Riskin Partners, credited the former ballerina with having closed more than $2 billion in high-end real estate sales since she founded company in the early 1990s. 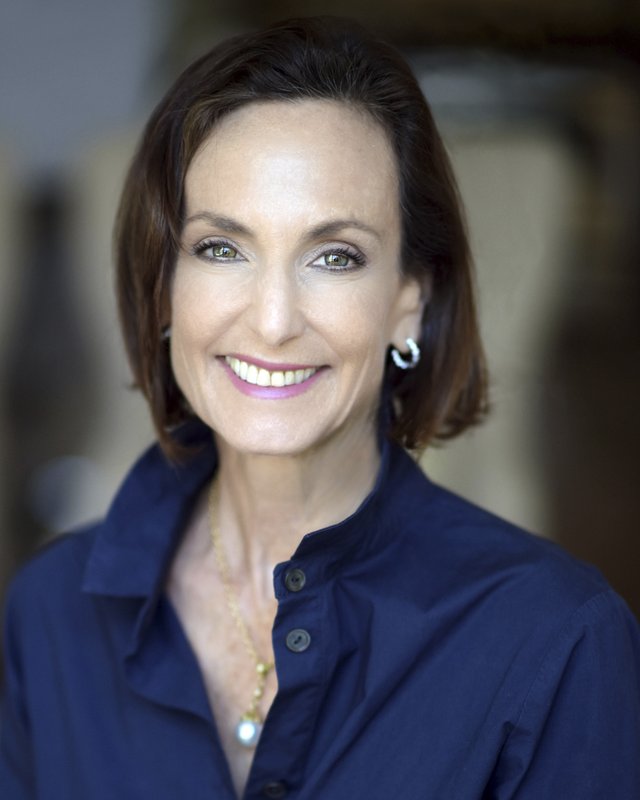 “She's leaving a huge void. She was exceptional,” said Gina Conte, who described the 61-year-old Riskin as her best friend, mentor and confidante.

Conte said Riskin, who was the maid of honor at her wedding, took joy in pairing the perfect home with the perfect family and loved cooking, going for long walks and spending movie nights with her family.

Riskin was swept away after a mudslide tore through her living room, Conte said, adding that her husband survived because he was in bed in a part of the house that stayed intact. Her body was found Wednesday near a highway.

Riskin Partners spokeswoman Erin Lammers said Riskin was a member of the American Ballet Theater in New York before an injury cut short her dancing career.

She returned to her hometown of Los Angeles in 1979, where she began selling high-end real estate on the city’s west side. She moved to Montecito in the early 1990s.

Riskin is survived by her husband, two grown children and a grandson.

Lauren Cantin, 14, became the face of survival when rescuers pulled the mud-covered girl from her flattened home earlier this week. Authorities said her 49-year-old father, David, died and her 16-year-old brother, Jack, is missing.

NeoTract, a maker of devices used in the medical field of urology, launched a fundraising page Wednesday, asking for financial support for the family of Cantin’s mother, Kim, a marketing executive for the company.

It took firefighters hours to dig Lauren out of the mud that destroyed her home.

“I thought I was dead for a minute,” she told them before an ambulance took her away.

Dr. Mark Montgomery and his 22-year-old daughter, Caroline, were among those killed in the disaster.

Mark Montgomery was a member of the Santa Barbara Cottage Hospital medical staff. Hospital spokeswoman Maria Zate says Montgomery was an orthopedic surgeon with a subspecialty in hand surgery.

No information was immediately available about his daughter.

The hammering rain was terrifying enough, but when David Weinert saw the house across the street erupt in flames fueled by a severed gas line, he knew it was time to abandon his Montecito home.

“Load up the car, get the dogs, we’re out of here,” the 58-year-old shopping center developer says he told his wife.

Unfortunately, there was no place to go. A police officer told him mudslides had already blocked all the roads out of town.

After driving for a few minutes, he realized the officer was right and went home. There he saw mudslides enveloping his street.

“The winds were just crazy. Trees were cracking. It was scary all right,” he said Thursday.

Weinert’s house was somehow spared but one of his neighbors, Riskin, was swept to her death.

Josephine “Josie” Gower, who also died in the Montecito mudslides, was celebrated by family as a woman who loved and embraced life for each one of her 69 years.

“I have never met anyone quite like her and never will again,” her daughter-in-law Sarah Gower wrote on Facebook after authorities confirmed Gower was one of 17 people killed by mudslides. “She was the life of the party, always, and loved us all so fiercely. She lived for her kids and for our kids.”

Gower’s own Facebook page reveals a woman with a playful love of life. One photo shows her dressed as a mermaid by a pool while others show her riding horses and cuddling with her cats.

“A bundle of fun,” her daughter-in-law said. “She was just simply the most loving, cheerful, beautiful, strong, independent force. We will miss her so.”

She is survived by two adult children and three grandchildren.

For a time during the deadly storm, 81-year-old Paula McDonald was one of the missing, without electricity or cellphone service and unable to reach her children to say she was all right.

McDonald was still at home in a retirement community Thursday, adding there was no point in leaving because she needs oxygen that is hard to transport to a hotel.

She took a look around outside to see just what the driving rainstorm had wrought as it triggered mudslides on hillsides laid bare by a massive wildfire last month.

“It’s just incredible. Seeing pictures doesn’t do it justice,” she said of the downed trees, flattened houses and muddy streets. “I thought the fires were the worst things I’d seen in my life.”

One of the oldest victims was Roy Rohter, revered founder of a private Catholic school in nearby Ventura.

The 84-year-old former real estate broker had fled his Montecito home just last month when it came under threat from the wildfire. He died at that home, authorities confirmed Thursday.

“Roy believed intensely in the power of a Catholic education,” St. Augustine Headmaster Michael Van Hecke, said this week. “He’s been a deep supporter of the school in every way and a mentor to me personally, to the faculty and to the kids.”

Officials of the K-12 school Rohter founded in 1994 said his wife was injured in the mudslide but survived.

“Pray also for his wife, Theresa, the gentle giant of charity and grace, and for his children and grandchildren,” the school said in a statement.