William Barr has been attorney general for just one week but is on the cusp of staring down what will almost certainly be the most consequential decision of his long career: how much of the special counsel's findings to make public. 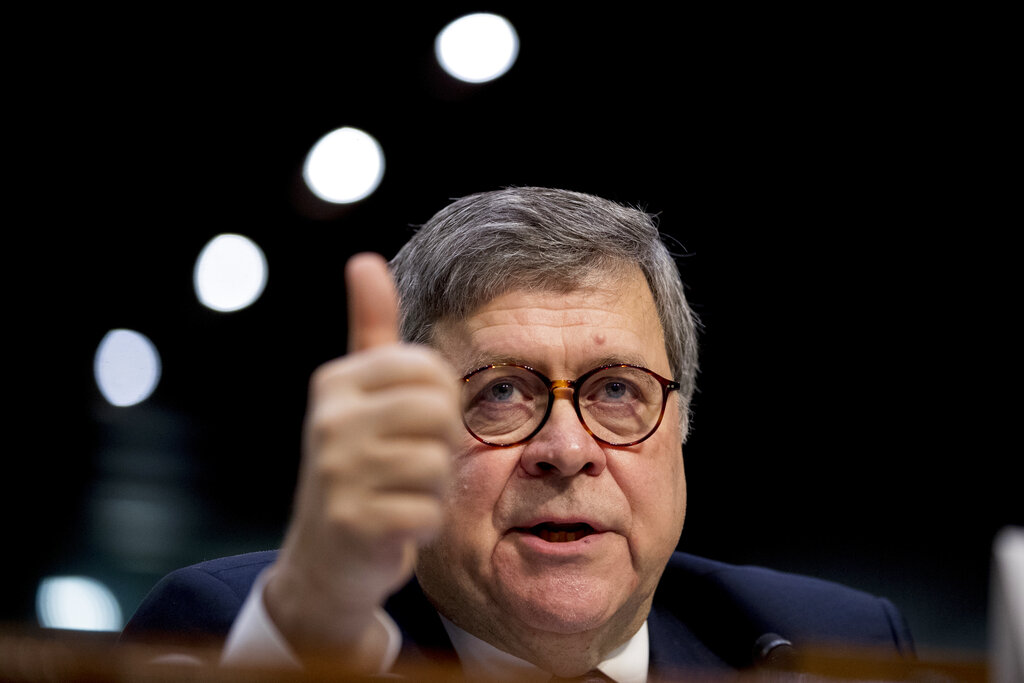 The position catapults him from Justice Department outsider free to theorize and speculate on special counsel Robert Mueller's investigation to the man at the center of the legal and political firestorm that will accompany its looming conclusion.

With Deputy Attorney General Rod Rosenstein preparing to exit after supervising the day-to-day investigation for nearly two years, and with Trump loyalist Matthew Whitaker now replaced in the top job, Barr is in the hot seat: He is responsible for navigating the department through congressional and public demands for details of Mueller's findings while dealing with a White House that may challenge, or even stifle, the conclusions.

Friends say Barr is accustomed to pressure-cooker situations by virtue of his experience as attorney general from 1991 to 1993 under President George H.W. Bush, and other senior Justice Department jobs. He oversaw the department's response when Los Angeles erupted in riots after the Rodney King verdict and when Cuban inmates took hostages at a federal prison in Alabama. He blessed Bush administration pardons in the Iran-Contra scandal and offered legal advice on the White House's ability to invade Panama.

In this case, though, no less than the fate of Donald Trump's presidency may hang in the balance of whatever Barr decides.

"I'm sure it's going to be a tough set of decisions and circumstances, but Bill doesn't shy away from tough situations," said former Justice Department colleague Timothy Flanigan. "He's not likely to sit there fretting over what does this mean for his legacy or his long-term political viability."

Although Barr carefully weighs difficult decisions and consults others before making them, once he's made them, "he doesn't kind of circle and fret," Flanigan said.

Key decisions are expected soon as Mueller shows signs of concluding his investigation into Russian interference in the 2016 US presidential election and possible coordination with the Trump campaign.

Mueller is required to produce a confidential report to Barr that explains his decisions to pursue or decline prosecutions. That could be as simple as a bullet point list or as fulsome as a report running hundreds of pages. Barr will then have to decide how much of Mueller's findings should be disclosed to the public.

At his confirmation hearing last month, Barr was noncommittal about what he would do, though he said repeatedly that he supported making as much public as possible, "consistent with the law." He said in his congressional testimony that he will write his own report summarizing Mueller's findings for Congress and the public.

"I can assure you that, where judgments are to be made by me, I will make those judgments based solely on the law and will let no personal, political or other improper interests influence my decisions," he said.

Barr has noted that department protocol says internal memos explaining charging decisions should not be released. The attorney general is required only to say the investigation has concluded and describe or explain any times when he or Rosenstein decided an action Mueller proposed "was so inappropriate or unwarranted" that it should not be pursued.

Democrats could use Mueller's findings as the basis of impeachment proceedings and have threatened to subpoena them if they are withheld from Congress. It's not clear what the White House or Trump's lawyers may do to learn details of Mueller's findings. But they may try to block the public release of any report that they believe could expose private conversations between the president and his staff.

Hovering in the background is the 2016 decision by then-FBI Director James Comey to break Justice Department norms in the Hillary Clinton email investigation by publicly criticizing the Democratic presidential candidate even while saying she wouldn't be charged. Barr has said repeatedly that he disagrees with Comey's decision and considers it a mistake.

It's unclear what Mueller will place in his report and how far it will go in answering the central question of the investigation — whether the Trump campaign colluded with Russia — or how much he will reveal about whether the president sought to obstruct justice through firing Comey and other actions.

Barr made clear at his confirmation hearing that he agreed Russia had meddled in the 2016 election and that Mueller's investigation, contrary to Trump's claims, is not a "witch hunt."

But his view on the obstruction question is more nuanced. As a private citizen, he sent the Justice Department a memo last June arguing that Trump couldn't be investigated for firing Comey because a president has discretion to hire and fire subordinates. He has since sought to make clear that he believes that a president can be guilty of obstructing justice in other ways, such as by destroying evidence or instructing witnesses to lie.

It's not clear if Mueller will make recommendations about the president, though Barr has said he sees no reason to revisit Justice Department legal opinions that say a sitting president cannot be indicted.

Barr, who friends say was reluctant to return as attorney general, has made clear that at age 68, he feels empowered to do the right thing and not care about the consequences. But that doesn't mean it will be easy.