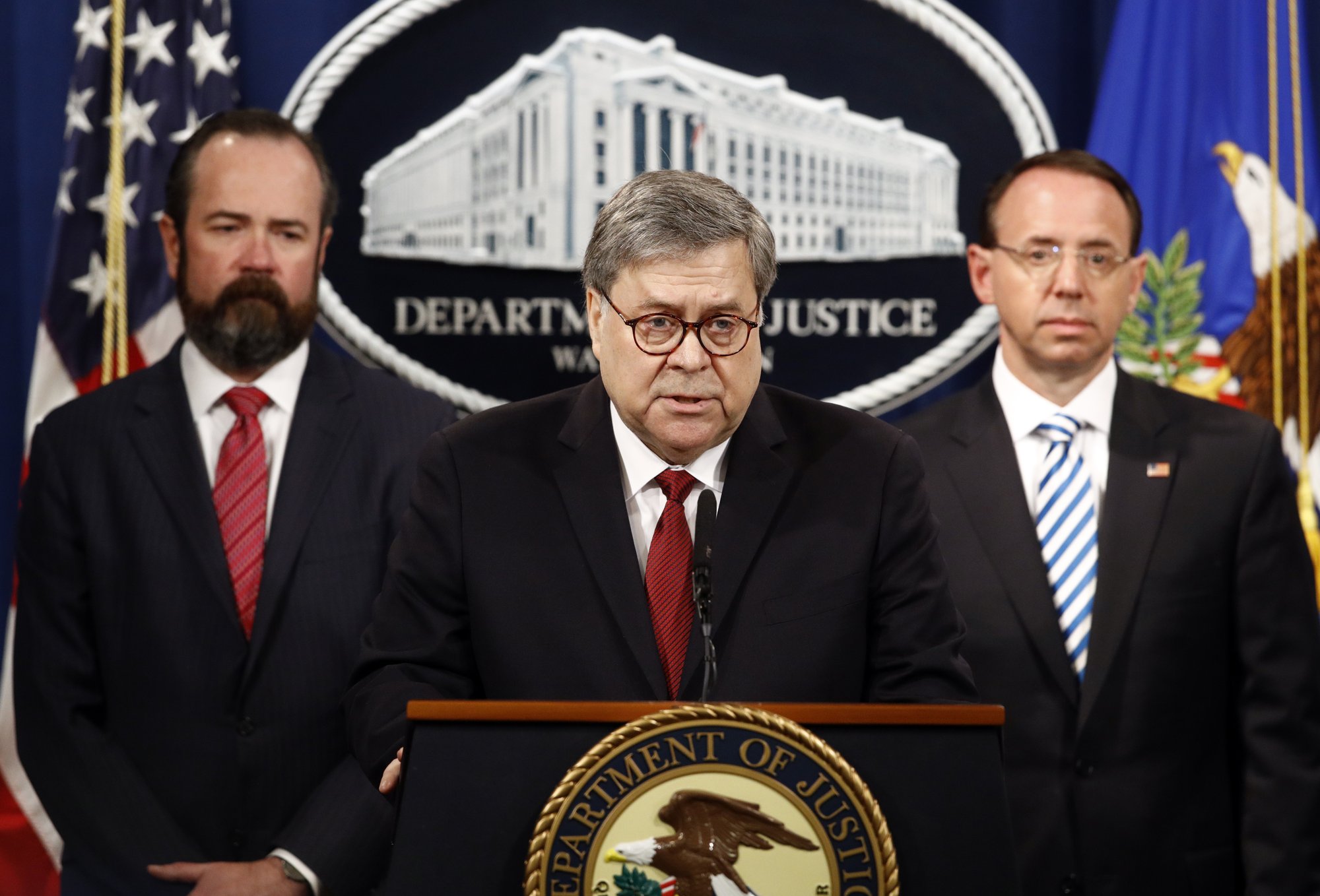 Public at last, special counsel Robert Mueller’s report revealed to a waiting nation Thursday that President Donald Trump tried to seize control of the Russia probe and force Mueller’s removal to stop him from investigating potential obstruction of justice by the president. Trump was largely thwarted by those around him who refused to go along.

Mueller laid out multiple episodes in which Trump directed others to influence or curtail the Russia investigation after the special counsel’s appointment in May 2017. Those efforts “were mostly unsuccessful, but that is largely because the persons who surrounded the President declined to carry out orders or accede to his requests,” Mueller wrote.

After nearly two years, the two-volume, 448-page redacted report made for riveting reading.

In one particularly dramatic moment, Mueller reported that Trump was so agitated at the special counsel’s appointment on May 17, 2017, that he slumped back in his chair and declared: “Oh my God. This is terrible. This is the end of my presidency. I’m f---ed.”

With that, Trump set out to save himself.

In June of that year, Mueller wrote, Trump directed White House Counsel Don McGahn to call Deputy Attorney General Rod Rosenstein, who oversaw the probe, and say that Mueller must be ousted because he had conflicts of interest. McGahn refused — deciding he would sooner resign than trigger a potential crisis akin to the Saturday Night Massacre of Watergate firings fame.

Two days later, the president made another attempt to alter the course of the investigation, meeting with former campaign manager Corey Lewandowski and dictating a message for him to relay to then-Attorney General Jeff Sessions. The message: Sessions would publicly call the investigation “very unfair” to the president, declare Trump did nothing wrong and say that Mueller should limit his probe to “investigating election meddling for future elections.” The message was never delivered.

The report’s bottom line largely tracked the findings revealed in Attorney General William Barr’s four-page memo released a month ago — no collusion with Russia but no clear verdict on obstruction — but it added new layers of detail about Trump’s efforts to thwart the investigation. Looking ahead, both sides were already using the findings to amplify well-rehearsed arguments about Trump’s conduct, Republicans casting him as a victim of harassment and Democrats depicting the president as stepping far over the line to derail the investigation.

The Justice Department released its redacted version of the report about 90 minutes after Barr offered his own final assessment of the findings at a testy news conference. The nation, Congress and Trump’s White House consumed it voraciously — online, via a compact disc delivered to legislators and in loose-leaf binders distributed to reporters.

The release represented a moment of closure nearly two years in the making but also the starting bell for a new round of partisan warfare.

A defiant Trump pronounced it “a good day” and tweeted “Game Over” in a typeface mimicking the “Game of Thrones” logo. By late afternoon, he was airborne for his Mar-a-Lago private club in Florida with wife Melania for the holiday weekend, without further comment.

House Minority Leader Kevin McCarthy said it was time to move on from Democrats’ effort to “vilify a political opponent.” The California lawmaker said the report failed to deliver the “imaginary evidence” incriminating Trump that Democrats had sought.

Trump campaign manager Brad Parscale said Republicans should turn the tables and “investigate the liars who instigated this sham investigation.”

But Democrats cried foul over Barr’s preemptive press conference and said the report revealed troubling details about Trump’s conduct in the White House.

In a joint statement, House Speaker Nancy Pelosi and Senate Democratic leader Chuck Schumer wrote that “one thing is clear: Attorney General Barr presented a conclusion that the president did not obstruct justice while Mueller’s report appears to undercut that finding.”

House Judiciary Chairman Jerrold Nadler added that the report “outlines disturbing evidence that President Trump engaged in obstruction of justice and other misconduct.” He sent a letter to the Justice Department requesting that Mueller himself testify before his panel “no later than May 23″ and said he’d be issuing a subpoena for the full special counsel report and the underlying materials.

Trump himself was never questioned in person, but the report’s appendix includes 12 pages of his written responses to queries from Mueller’s team.

Mueller deemed Trump’s written answers — rife with iterations of “I don’t recall” — to be “inadequate.” He considered issuing a subpoena to force the president to appear in person but decided against it after weighing the likelihood of a long legal battle.

In his written answers, Trump said his comment during a 2016 political rally asking Russian hackers to help find emails scrubbed from Hillary Clinton’s private server was made “in jest and sarcastically” and that he did not recall being told during the campaign of any Russian effort to infiltrate or hack computer systems.

Mueller evaluated 10 episodes for possible obstruction of justice, and said he could not conclusively determine that Trump had committed criminal obstruction. The episodes included Trump’s firing of FBI Director James Comey, the president’s directive to subordinates to have Mueller fired and efforts to encourage witnesses not to cooperate.

Sessions was so affected by Trump’s frequent criticism of him for recusing himself from the investigation that he kept a resignation letter “with him in his pocket every time he went to the White House,” Mueller said.

The president’s lawyers have said Trump’s conduct fell within his constitutional powers, but Mueller’s team deemed the episodes deserving of scrutiny for potential criminal acts.

As for the question of whether the Trump campaign had colluded with Russia during the 2016 presidential campaign, Mueller wrote that the campaign “expected it would benefit electorally from information stolen and released through Russian efforts.”

But Mueller said investigators concluded, “While the investigation identified numerous links between individuals with ties to the Russian government and individuals associated with the Trump Campaign, the evidence was not sufficient to support criminal charges.”

Workers at a Russian troll farm contacted Trump’s campaign, claiming to be political activists for conservative grassroots organizations, and asked for signs and other campaign materials to use at rallies. While volunteers provided some of those materials — and set aside a number of signs — investigators don’t believe any Trump campaign officials knew the requests were coming from foreign nationals, Mueller wrote.

Mueller wrote that the Trump campaign “expected it would benefit electorally from information stolen and released through Russian efforts” but that investigators “did not establish that members of the Trump campaign conspired or coordinated with the Russian government in its election interference activities.”

Josh Blackman, a professor at the South Texas College of Law Houston, stressed that Mueller didn’t think the president’s obligations to run the executive branch entitled him to absolute immunity from prosecution. But to find that the president obstructed justice, he said, Mueller would have needed much clearer evidence that the president acted solely with “corrupt intent.”

“The evidence was sort of muddled,” Blackman said, adding that the president’s actions had multiple motivations.

The report laid out some of Mueller’s reasoning for drawing no conclusion on the question of obstruction.

Mueller wrote that he would have exonerated Trump if he could, but he wasn’t able to do that given the evidence he uncovered. And he said the Justice Department’s standing opinion that a sitting president couldn’t be indicted meant he also couldn’t recommend Trump be criminally charged, even in secret.

Trump’s written responses addressed no questions about obstruction of justice, as was part of an agreement with Trump’s legal team.

He told Mueller he had “no recollection” of learning in advance about the much-scrutinized Trump Tower meeting between campaign officials and a Russian lawyer. He also said he had no recollection of knowledge about emails setting up the meeting that promised dirt on Clinton’s Democratic campaign.

He broadly denied knowing of any foreign government trying to help his campaign, including the Russian government. He said he was aware of some reports that Russian President Vladimir Putin had made “complimentary statements” about him.

It wasn’t just Trump under the microscope. But Mueller wrote that he believed prosecutors would be unlikely to meet the burden of proof to show that Donald Trump Jr. and other participants in the Trump Tower meeting “had general knowledge that their conduct was unlawful.” Nor did Mueller’s probe develop evidence that they knew that foreign contributions to campaigns were illegal or other particulars of federal law.

Barr’s contention that the report contained only “limited redactions” applied more to the obstruction of justice section than its look at Russian election meddling. Overall, about 40 percent of the pages contained at least something that was blocked out, mostly to protect ongoing investigations. Barr had said that he would redact grand jury information and material related to investigations, privacy and intelligence.