On Sunday afternoon, the US Attorney General William Barr sent a letter to key congressional members saying that special prosecutor Robert Mueller's investigation showed no evidence that President Trump and his campaign colluded with Russia to interfere in the 2016 election. 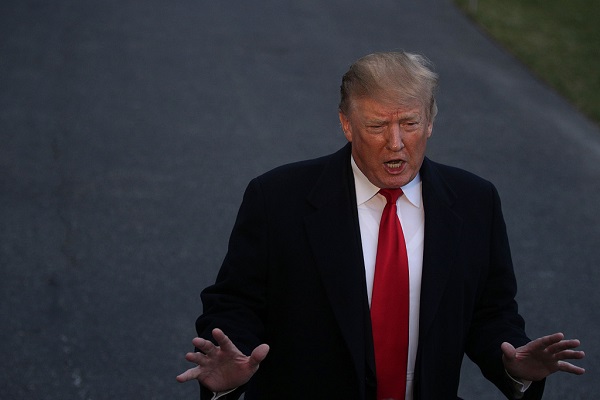 US President Donald Trump speaks to members of the media as he returns to the White House after spending the weekend in Florida March 24, 2019 in Washington, DC. (Photos: VCG)

The Attorney General also said that based on the findings of the investigation, he did not believe there was any obstruction of justice by Trump, although the investigation itself stressed that it did not exonerate Trump.

Trump and his supporters immediately said the results showed there was no basis for previous attacks on him by his political opponents. On the Democrat side, the prevailing view is that Trump has not been fully exonerated and has demanded that the Attorney General release the full text of Mueller's report.

Trump told reporters that "there was no collusion with Russia. There was no obstruction, and -- none whatsoever. And it was a complete and total exoneration. It's a shame that our country had to go through this."

Trump also took the opportunity to attack his Democratic opponents. He said that “it's a shame that your President has had to go through this for -- before I even got elected, it began. And it began illegally. And hopefully, somebody is going to look at the other side. This was an illegal takedown that failed. And hopefully, somebody is going to be looking at the other side.”

"This is a complete and total vindication of the president,” Trump’s legal team said in a statement. “It’s better than I expected,” said Trump’s lawyer Rudy Giuliani.

However, Congressional Democrats are not about to drop their probe over Trump. “The fact that Special Counsel Mueller’s report does not exonerate the president on a charge as serious as obstruction of justice demonstrates how urgent it is that the full report and underlying documentation be made public without any further delay,” House Speaker Nancy Pelosi and top Senate Democrat Chuck Schumer said in a joint statement.

House Judiciary Committee Chairman Jerrold Nadler said he plans to ask Barr to testify before his committee to explain why he thought Trump should not be charged with obstruction of justice.

Nadler and House Intelligence Committee Chairman Adam Schiff have also previously said that they may try to get Muller to testify in front of Congress. 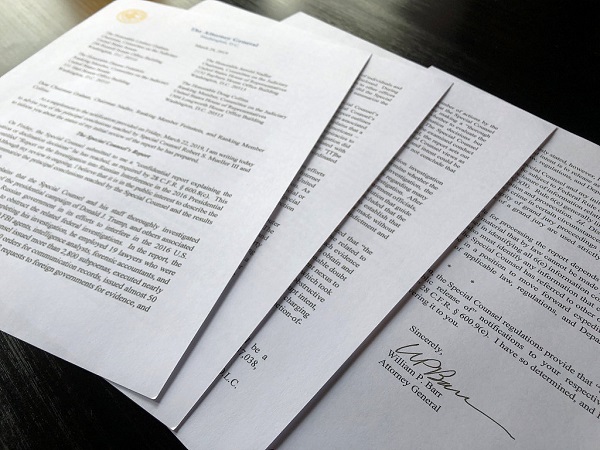 US Attorney General William Barr's signature is seen at the end of his four page letter to US congressional leaders on the conclusions of Special Counsel Robert Mueller's report on Russian meddling in the 2016 election after the letter was released by the House Judiciary Committee in Washington, US March 24, 2019.

It is certain that the judicial investigation into Trump will not end soon. The US Attorney’s office in Manhattan and other prosecutors are pursuing cases against Trump that include possible campaign finance violations. Prosecutors are also examining potential illegal donations to Trump’s inauguration committee. In addition, Democrats are also using their current House majority to press ahead with their own investigation.

This latest development has sent shockwaves through American politics. Analysts say the results of the Mueller investigation will have a direct impact on the 2020 presidential election. In the short term, Democrats may have to pay for their previous activism on the issue.

“It doesn’t look like there’s impeachment. Democratic leaders were already backing away from it,” said Elaine Kamarck, a senior fellow at the Brookings Institution told Reuters.

Mueller ended his investigation on Friday after bringing charges against 34 people, including key Trump allies such as former campaign chairman Paul Manafort, former national security adviser Mike Flynn and former personal lawyer Michael Cohen. However, none of those charges directly relate to collision with Russia to influence the 2016 US presidential election.

In his summary, Barr said Mueller had used 19 lawyers and 40 FBI agents in the nearly two-year investigation, issued more than 2,800 subpoenas, spoke to about 500 witnesses and executed nearly 500 search warrants.

Some Republican lawmakers have also asked the Attorney General for more information about Mueller’s report.

“I appreciate the Attorney General’s commitment to continue to review the record on this matter over the coming days, in conjunction with Special Counsel (Robert) Mueller, with the goal of producing as much information as possible, consistent with the law. I look forward to reviewing that information,” Senate Republican leader Mitch McConnell said in a statement.

Another powerful Republican senator, Intelligence Committee Chairman Richard Burr, also said that Barr should release as much of Mueller’s report as possible.