Musa scores twice to give Nigeria 2-0 win over Iceland

Musa scored two second-half goals to help the Nigerians beat Iceland 2-0 Friday and move into second place in the group behind already-qualified Croatia.

Nigeria will face Argentina in its final group match on Tuesday in St. Petersburg. If Nigeria wins, it will advance to the round of 16. But if Argentina claims all three points, it can still advance depending on the result of the other match between Croatia and Iceland.

Musa gave Nigeria the lead in the 49th minute after Victor Moses sprinted deep into the Iceland half and curled a cross to the near post. Musa deftly controlled the ball before slamming it past Iceland goalkeeper Hannes Halldorsson on the half-volley.

He doubled the lead in the 75th. Picking up the ball on the left side of the Iceland penalty area, Musa mazed his way past Halldorsson and picked his spot in the Iceland goal.

Iceland had a chance to get one back but Gylfi Sigurdsson sent a penalty kick way over the Nigeria bar in the 83rd minute. The penalty was awarded after a video review showed that Alfred Finnbogason had been brought down by Tyronne Ebuehi.

Iceland held Argentina to a 1-1 draw in its opening match, with Lionel Messi missing a penalty. And with Croatia routing the Argentines 3-0 on Thursday, it opened the way for Iceland to claim the group’s second spot in the round of 16.

But Nigeria’s second-half display in Volgograd was arguably as good as any in the World Cup and came after a fairly dour first half in which the Super Eagles did not register a shot on target.

Nigeria coach Gernot Rohr made some tactical changes, including bringing Musa into the starting lineup to inject some pace into the attack. Also, Nigeria captain John Obi Mikel played in a more defensive role in midfield, his presence helping to shore up the defense against Iceland’s two-man forward line.

In Iceland’s 1-1 draw against Argentina, the team played with a lone striker. 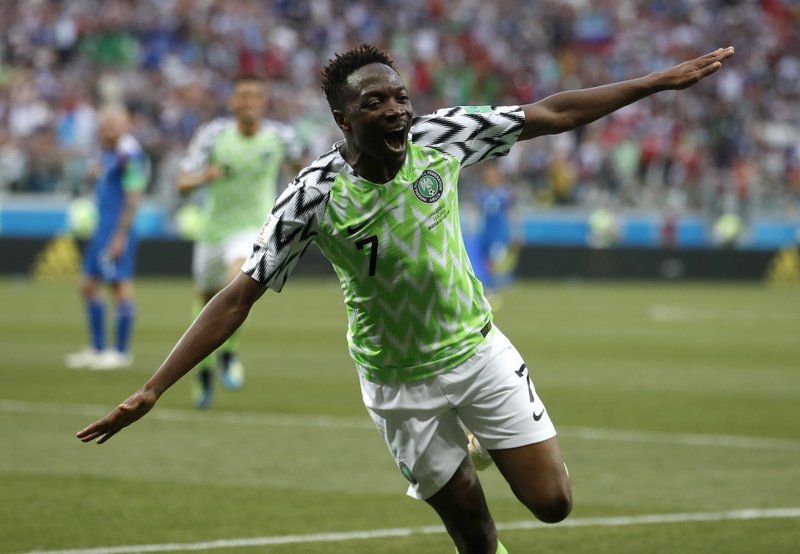