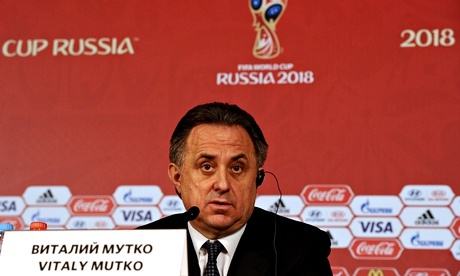 Russian Deputy Prime Minister Vitaly Mutko, who was banned for life from the Olympic Games this month over doping, said on Wednesday that he is stepping down as chairman of the 2018 World Cup organizing committee.

"(Organizing committee director Alexei) Sorokin will be the chairman," Mutko was quoted by Russian agencies as saying, two days after suspending his role as president of the Russian Football Union.

"He is the head of the organizing committee starting today," he said.

Sorokin, 45, had served as the executive director of the Russian Football Union between 2008 and 2010 and has overseen Russia's World Cup bid since 2009.

"He will interact with FIFA. I will concentrate on work in the government," Mutko said. "There is still a lot of work but I am absolutely sure that everything will be prepared in time.

"We expect that on May 30 we will meet all the obligations that the government gave FIFA."

Mutko on Monday announced that he plans to file a claim in the Court of Arbitration for Sport to contest his Olympic ban, and would suspend his duties in the RFU for the duration of the proceedings.

He added at the time that he would continue his role as chief coordinator of preparations for the World Cup Russia will host next summer until Russian leadership decides otherwise.

His decision to step down came after a meeting of the Russian government's coordination council for the World Cup preparations, which Mutko also chairs.

The Russia-2018 organizing committee said in a statement published by TASS agency that that "the change in leadership will have no consequences on the process of preparations for the world championship".

Mutko would "continue to oversee the preparation by the regions... and coordinate building the necessary infrastructure in his role as the deputy prime minister," the statement said.

On Wednesday he said his claim has been filed in the CAS.

Mutko was banned for life from the Olympic Games on December 5 after the International Olympic Committee said he was involved in a state-backed doping program.

The 59-year-old had until this week retained his posts in Russia throughout the doping scandal, even receiving a promotion from sports minister. He maintains that Russian athletes were clean at the 2014 Olympic Games.

Mutko in March was barred from sitting on the FIFA Council, the world body's ruling top table where the Russian sports official had a seat since 2009.

His participation was blocked because of potential conflicts of interest with his government role.