Myanmar in dire need of talk 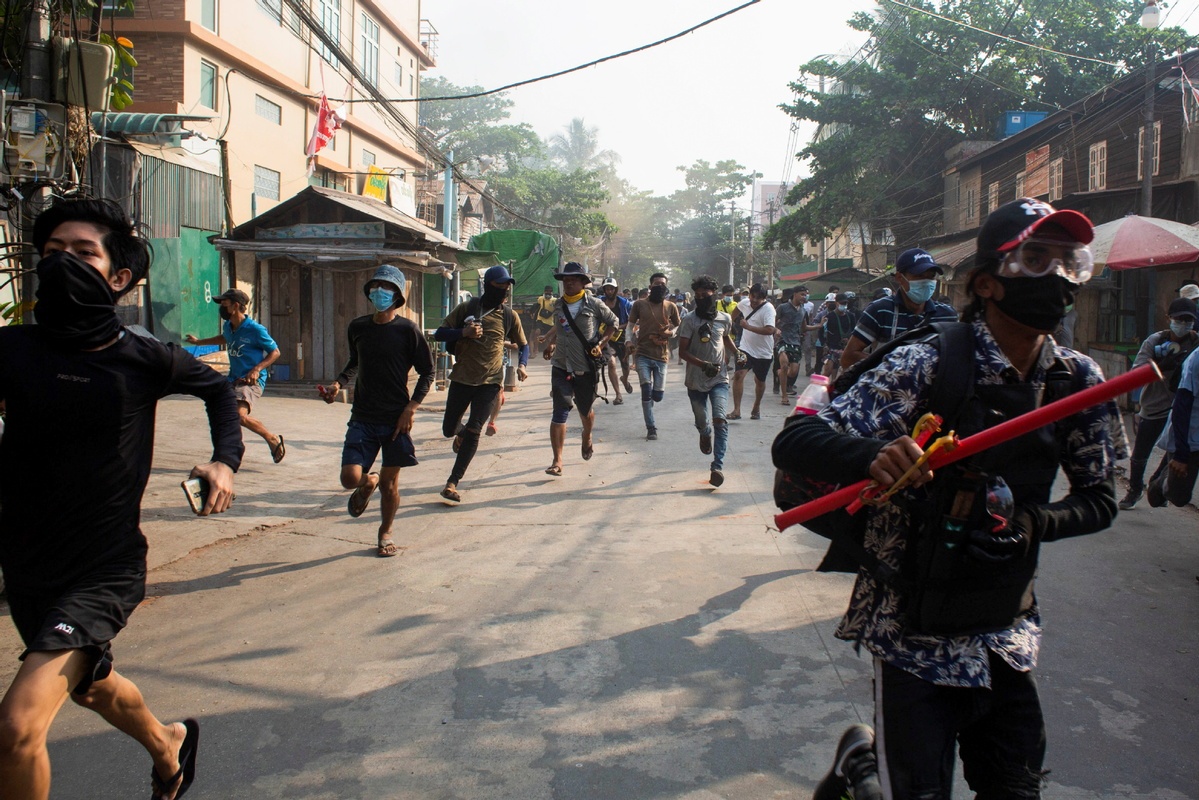 Men run during a protest against the military coup, in Yangon, Myanmar, March 28, 2021. (Photo: Agencies)

Myanmar is in dire need of dialogue and communication and a stop to seemingly endless violence that results in more bloodshed, analysts say.

"It would appear that neither the military nor the opposition is willing to back down from increasingly serious and violent confrontation," said Oh Ei Sun, senior fellow with the Singapore Institute of International Affairs, who is concerned about more casualties as the confrontation persists.

Over the weekend there were reports of more deaths in clashes between protesters and the military and police.

A local monitoring group, Assistance Association for Political Prisoners, said at least 90 people were killed on Saturday, which drew condemnation from a dozen countries.

"Some sort of mediation by trusted parties, domestic or foreign, to be participated in by all or most parties to the confrontation is necessary,"Oh said.

Despite Western sanctions, the country held a massive military parade to mark the 76th Armed Forces Day in the capital, Nay Pyi Taw, on Saturday, featuring 7,799 soldiers as well as jet fighters and helicopters.

"The army seeks to join hands with the entire nation to safeguard democracy" and restore peace across the country, he said.

But he added: "Violent acts that affect stability and security in order to make demands are inappropriate."

Armed Forces Day commemorates the start of resistance against Japanese occupation in 1945 that was orchestrated by Aung San Suu Kyi's father, the founder of the military.

Massive protests broke out after the military took over state power on Feb 1 with a major cabinet reshuffle as it alleged massive voting fraud in general elections in November.

The Deputy Minister for Information, Zaw Min Tun, said last Tuesday that 164 protesters had died in less than two months.

It remained to be seen if the sanctions would have any effect on violence, Oh said.

Min Zaw Oo, executive director of the Myanmar Institute for Peace and Security, said sanctions on individuals will have a limited impact, but the damage to the reputation of the military has deepened both domestically and internationally.

The most dangerous outcome, Min Zaw Oo said, was Myanmar being on the verge "of a major armed conflict if any foreign power decides to supply weapons to the opposition".

"If that happens, Myanmar will be destabilized beyond any point of returning to normalcy."

"The survival of domestic businesses is already challenging, so attempting to punish the country by imposing more sanctions will cripple the private sector."

Things had already been difficult before the military takeover because of the pandemic, Thuta Aung said.

The Association of Southeast Asian Nations can play a bridging role between the region and the world by "coming up with some intermediary role", he said.

Singapore's Minister for Foreign Affairs, Vivian Balakrishnan, was in Indonesia on Thursday and Friday after visiting Brunei and Malaysia. On Tuesday he and his Malaysian counterpart discussed Myanmar and ASEAN's support for the country's return to national reconciliation and stability.

"The dialogue is still an important mechanism," said Bridget Welsh, honorary research fellow with the Asia Research Institute of the University of Nottingham Malaysia.

"There is a deep concern among people who watch Myanmar closely that the country is going on the verge of potentially escalating to civil war. This will be extraordinarily problematic in terms of the regional spillover and the potential loss of lives."