Nearly 100 Rohingya smuggled from Myanmar's conflict-scarred Rakhine state were arrested in a raid in Yangon, police announced on Thursday, with authorities saying they had been headed to Malaysia as part of a trafficking network.

The plight of the Rohingya captured international headlines in 2017 after a military crackdown in western Rakhine state sent almost 750,000 fleeing across the border to Bangladesh. 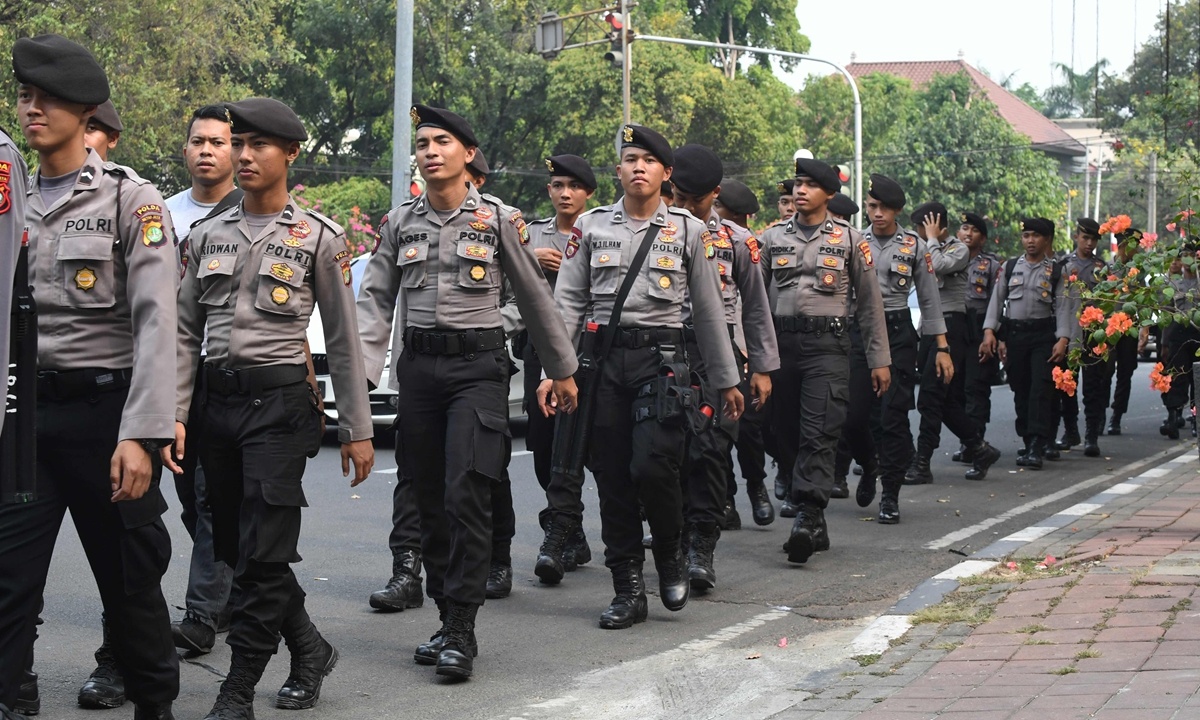 Indonesian policemen are deployed outside the Myanmar embassy in Jakarta on September 4, 2017, after a petrol bomb was thrown into the embassy compounds. (Photo: VCG)

Members of the stateless minority group have long faced discrimination in Myanmar, where they are denied freedom of movement and citizenship, and lack access to work, healthcare and schools. With the remaining languishing in camps that rights groups have described as "apartheid-like," many choose to embark on treacherous routes with human smugglers to reach Malaysia and Indonesia. The latest smuggling operation was uncovered by Yangon police on Wednesday, who raided two houses in Shwepyitha township and discovered 99 Rohingya.

"They came from Maungdaw, Buthidaung, Sittwe and Kyauktaw townships [in Rakhine state] to travel to Malaysia to work," Tin Maung Lwin, the township's deputy police superintendent, told AFP on Thursday.

Images published by local media showed the Rohingya huddled barefoot, wearing face masks, in front of a leafy multistory house where they had reportedly been hiding for months.

Seventy-three of the group were women, Tin Maung Lwin told AFP, and they were accompanied by a number of children between the ages of 5 to 10.

They are currently quarantined in a local university where they have been tested for coronavirus, said Kyaw Soe Aung from the Arakan City Cooperation Network, a Rohingya aid group.

"We heard they haven't eaten for three days, so we sent them food and clothes yesterday," he told AFP.

They followed him to a house where they discovered the others. No smugglers were reportedly arrested.

"We will continue investigating the people who brought them here," Tin Maung Lwin said, adding that he couldn't say whether the Rohingya would be sent back to Rakhine state. Many of the trapped Rohingya are willing to pay around $1,500 to traffickers.