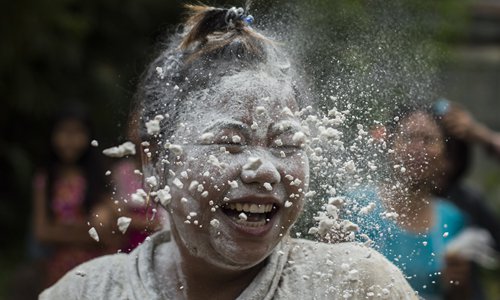 A woman laughs while playing a game with cake-making ingredients as part of local festivities marking Myanmar's 70th Independence Day in Yangon on Thursday. Photo: AFP

Myanmar's civilian president called in an Independence Day speech on Thursday for reform of a military-drafted constitution and for justice for all recognized minorities under a federal system.Amending the charter to remove a dominant political role for the military has been one of the most contentious issues facing Myanmar as it emerges from nearly half a century of strict army rule."As we build the Democratic Federal Republic, in accordance with the results of the political dialogues, we all need to work collectively for creating a suitable constitution," President Htin Kyaw said in his speech marking the 70th anniversary of Myanmar's independence from Britain.Htin Kyaw's post is largely ceremonial but he is a close ally of State Counselor Aung San Suu Kyi. He did not elaborate on what he meant by suitable or spell out why he was suggesting the 2008 constitution drawn up by the military was unsuitable.The constitution bars Suu Kyi from becoming president because it rules out candidates with a foreign spouse or child. Suu Kyi's late husband was British as are her two sons.It also reserves for the military one quarter of the seats in parliament and several major cabinet posts, including defense, interior and border affairs, giving it an effective veto over constitutional change and control of security affairs.Myanmar began emerging from 49 years of military rule in 2011. Suu Kyi's party swept a 2015 election and formed a government but concern is growing that the reform program is stalling or even sliding back."We are working for the emergence of a democratic state based on the principles of freedom for all ethnic national races, justice, equality and right of self-determination," Htin Kyaw said."National race" is a term used by Myanmar referring to what it categorizes as indigenous ethnic groups. Htin Kyaw called for an end to conflict with insurgents from various ethnic minorities who have been battling for autonomy for decades.Amending the constitution would not be easy.Changes require a 76 percent majority vote in a parliament dominated by military members and their allies.