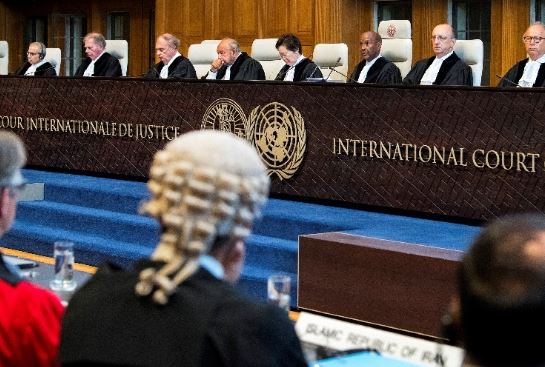 Members of the International Court of Justice conduct a hearing on alleged violations of the 1955 Treaty of Amity between Iran and the United States on August 27, 2018. (Photo: Xinhua)

Suu Kyi's arguments lasted for around half an hour in court, saying the genocide charge was "misleading."

"It may be worth noting that the use of air force in military operations is avoided as far as possible to minimize the risk of collateral damage," Suu Kyi said. "However, I have heard in one incident, when the use of a helicopter was required, there was shooting from a helicopter which may have been resulted in civilian casualties. It cannot be ruled out that disproportionate force was used by the armed forces in some cases in disregard with international humanitarian law."

Suu Kyi said the Myanmar army only intervened after an attack by fighters of the Arakan Rohingya Salvation Army in August 2017. She pointed out that tensions have existed for centuries between different groups in the Rakhine state in Myanmar.

Gambia, on behalf of the Organization of the Islamic Cooperation (OIC), filed a complaint with the ICJ against Myanmar over alleged violation of the 1948 Convention on the Prevention and Punishment of the Crime of Genocide in western Rakhine state.

Public hearings have been held at the request of Gambia at the ICJ, scheduled from Tuesday to Thursday.

On Tuesday, Gambia spoke during the initial hearings in The Hague.

"All that Gambia asks is that you tell Myanmar to stop the senseless killings, to stop these acts of barbarity and to stop this genocide of its own people," Gambia's Justice Minister Abubacarr Tambadou said in his opening statement.

Suu Kyi led a team of lawyers to the ICJ to defend the Myanmar government and military.

Suu Kyi called the issue an internal armed conflict and asked the judges to "refrain from action that might be aggravated."

She said Myanmar is doing everything it can to ensure that the Rohingya refugees can return safely.

The closing arguments from both sides at the ICJ will be made on Thursday.