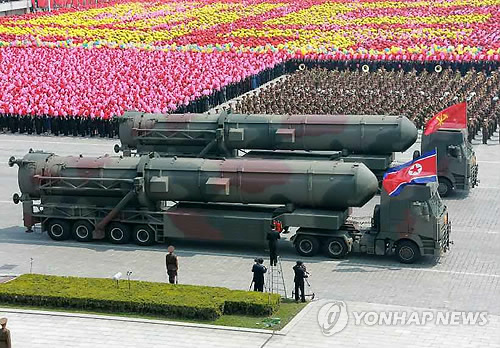 SEOUL, Jan. 26 (Yonhap) -- North Korea is likely to hold a military parade on an "intimidating" scale to mark the 70th founding anniversary of its military, one day before the opening of the PyeongChang Olympics, a Seoul official said Friday.

At Mirim Airfield in Pyongyang, the North is preparing for a massive military parade to mark the anniversary of the Korean People's Army (KPA) on Feb. 8, according to Unification Minister Cho Myoung-gyon. 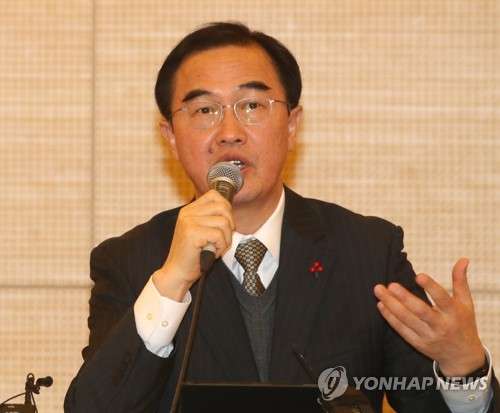 "There is a high possibility that the North could hold an intimidating military parade by mobilizing sizable numbers of military personnel and almost all of its weapons," Cho told a forum in Seoul.

North Korea set up the KPA on Feb. 8, 1948, and celebrated the date as the founding anniversary until 1977. But in 1978, the country switched the anniversary to April 25, the date when the late founder Kim Il-sung created anti-Japanese guerrilla forces in 1932.

"The North seems to be preparing for major events massively on the ground as the regime marks the 70th anniversary of its creation, and its leader Kim Jong-un apparently wants to show his absolute power," Cho said.

Concerns are growing that the North's planned military parade will likely dampen Seoul's efforts to hold the Winter Olympics as an event to promote peace. The North plans to send a delegation including athletes, high-ranking officials and others to the Feb. 9-25 Winter Games in the South.

"The public and the international community probably have grave concerns (about the North's parade). But (I think) the government's efforts to make the PyeongChang Games a 'Peace Olympics' and the North's participation in the games could (also mitigate such concerns)," Cho said.

Seoul's unification ministry declined to comment, when asked if the government sees North Korea's envisioned military parade as a provocation.

"But the government will make efforts to hold the Winter Olympics and the Paralympics as events for peace," Lee Eugene, vice ministry spokesperson, told a regular press briefing.

"There is also no change in the stance that Seoul hopes to peacefully resolve the North's nuclear issue. We believe that this would help improve inter-Korean relations and bring peace to the Korean Peninsula."

The two Koreas have engaged in a flurry of sports diplomacy after the North's leader extended a rare offer for rapprochement to Seoul in his New Year's message following years of nuclear and missile provocations.

Earlier this month, Seoul and Washington agreed to delay their annual joint military drills until after the Olympics and the March 9-18 Paralympics.

The minister said that, as the allies will postpone the exercises until after March 25, it is important to make the current conciliatory mood pave the way for dialogue between the U.S. and North Korea before that date.

"If the allies resume their exercises, North Korea will likely protest strongly against them. There is a high chance of North Korean provocations, which would make the international community impose further sanctions," Cho said. "It is a realistic guess that a vicious circle of repeated provocations and sanctions could come back soon."

The minister said Seoul delivered concerns about the North's possible provocations to Pyongyang at their first formal talks in more than two years earlier this month.

The two Koreas held high-level talks on Jan. 9 to discuss the North's participation in the Olympics and ways to improve inter-Korean relations.

Cho said it is critical that Seoul explore ways to sustain momentum for better ties even after the Olympics.

"We are facing tasks over how to make momentum (for more inter-Korean dialogue) lead into April and extend after June," the minister added.