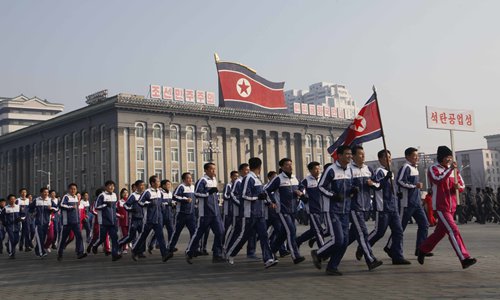 A group of officials from ministries and national institutions run on the first sports day of 2018 at Kim Il-sung Square in Pyongyang, North Korea, on Sunday. Photo: AP

Political powers are gearing up for the upcoming 23rd Winter Olympic Games to be held in Pyeongchang, South Korea, as the occasion reignites hope for a possible resolution to the Korean nuclear crisis.
Not only athletes and coaches, diplomats and politicians are preparing to seize this opportunity for their political demands, said Lü Chao, a research fellow at the Liaoning Academy of Social Sciences.
South Korea on Saturday agreed to meet North Korea over the latter's plan to send an art troupe south of the border during the upcoming Games, to be held in February, the Yonhap News reported.
"North Korea wants to send a huge delegation but with only dozens of athletes, so it's very clear that North Korea hopes to turn the Olympics into a platform for its political purpose," Lü said.
South Korean Prime Minister Lee Nak-yon said last week that "A massive delegation totaling between 400-500 people is expected to come (from North Korea)," including high-ranking officials, athletes, cheering and performing arts squads, taekwondo demonstration teams and journalists. But there will be only about 20 athletes in the delegation, Yonhap reported.
"Such a huge delegation will be led by a senior official, and Choe Ryong-hae would be the optimal option," Lü said.
Choe, vice chairman of the Workers' Party of Korea who last October was made a member of the party's powerful Central Military Commission, has been appointed to head the ruling party's organization and guidance department, in charge of overseeing personnel policy for party officials, said South Korean unification ministry on Thursday.
"Choe is the most trustworthy man for the leader Kim Jong-un, and more importantly, the US has made a decision to send Vice President Mike Pence to lead the US delegation to Pyeongchang. If there is any possibility of a bilateral meeting between North Korea and the US, Choe would be the most suitable representative," Lü explained.
The US State Department said on Tuesday that there are not plans for the American delegation to meet the North Korean delegation, Reuters reported.
This could be a great opportunity for both the US and North Korea to turn the crisis into détente, and it's really possible to see a  trilateral meeting between the US and the two Koreas, Lü said.
Détente demands more sincerity, said Da Zhigang, director of the Institute of Northeast Asian Studies at the Heilongjiang Academy of Social Sciences.
"Without promises on abandoning nuclear weapons or at least to suspend nuclear and missile tests, the meeting will have no conditions," Da said.
This is not the first time that North Korea took advantage of sports events for political purposes. At the closing ceremony of the 2014 Asian Games in Incheon, South Korea, Pyongyang sent Choe and high-ranking officials to meet their South Korean counterparts, and that was the first high-level meeting between the two Koreas in five years.
Lü said that, "The meeting in 2014 was meaningless to some extent and it brought no breakthrough for inter-Korean relations. The US and North Korea have always had communication channels. We should not expect the Olympics next month could bring dramatic progress."

As the Russian delegation has been banned for doping from the Games, hosts South Korea will seize this opportunity to grab more gold medals, Lü said.
Sun Yuanfu, deputy director of winter sports, told the Xinhua News Agency last week that Chinese athletes face a challenge at the Games.
Fifty-three Chinese athletes have qualified for the Games so far, and Sun said he expects 15 or more to qualify in the next few weeks.