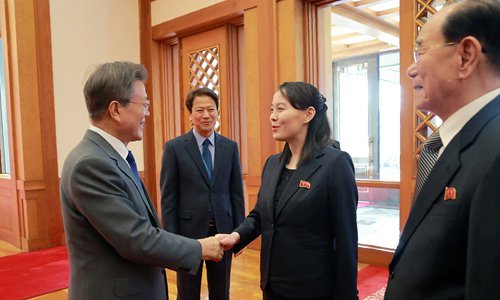 North Korea on Tuesday urged the US military to leave South Korea, pledging to build up North Korean nuclear weapons in response to the upcoming joint US-South Korea military drills.

Kim Yo-jong, vice department director of the Central Committee of the Workers' Party of Korea, said in a statement released by the Korean Central News Agency (KCNA) that the US and South Korea desperately started joint military exercises, further accelerating the unstable situation "despite the unanimous denunciation and rejection at home and abroad."

"They are the most vivid expression of the US hostile policy toward the DPRK [Democratic People's Republic of Korea], designed to stifle our state by force, and an unwelcoming act of self-destruction for which a dear price should be paid as they threaten the safety of our people and further imperil the situation on the Korean peninsula," said Kim, who is also the younger sister of North Korean top leader Kim Jong-un.

The joint US-South Korea military exercises include an "exercise of the staff for crisis control" from Tuesday to Friday and a "combined command exercise" from Monday to August 26, according to the KCNA.

As long as the US forces stay in South Korea, "the root cause for the periodic aggravation of the situation on the Korean peninsula will never vanish," Kim Yo-jong said.