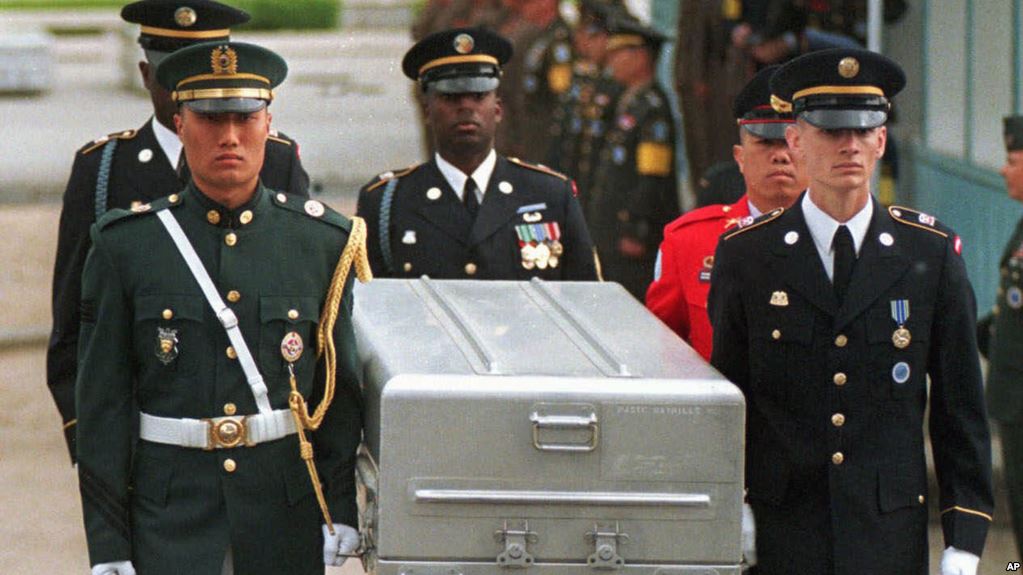 U.N. honor guards carry a coffin containing the remains of an American soldier after they were returned by North Korea, at the border village of Panmunjom, South Korea, May 14, 1999. (File Photo: AP)

North Korean and US military officials met at the inter-Korea border Sunday to discuss repatriation of the remains of American troops killed during the Korean War, a report said.

Returning the remains of the US soldiers who perished during the 1950-53 conflict was part of a deal signed by the North's leader Kim Jong-Un and US President Donald Trump during their landmark summit last month.

The latest talks began at the border truce village of Panmunjom on Sunday, the South's Yonhap news agency said, citing a Seoul official.

"We understand that the North-US talks on repatriation of the remains are underway," it quoted an unnamed official as saying.

TV news footage showed vehicles with US army plates and believed to be carrying American officials heading to the heavily fortified border.

US Secretary of State Mike Pompeo, who visited Pyongyang earlier this month to flesh out details of the denuclearisation deal signed by Kim and Trump, said earlier that the meeting would take place on or around last Thursday.

The North did not show up at the border on Thursday but contacted the US on the same day to offer to meet on Sunday, US State Department spokeswoman Heather Nauert said last week, adding "We will be ready."

Dozens of wooden coffins to carry the American remains have reportedly been brought to the southern side of the border in recent weeks.