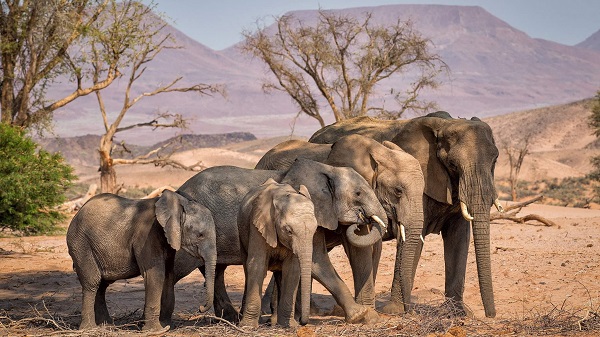 56-year-old US amateur photographer Dale Johnson took an amazing picture in the Damaraland region of Namibia in Africa, as a family of grey elephants lined themselves up in heigh order. (File Photo: VCG)

Namibia attained Independence in 1990 and at the time, human-wildlife conflict, poaching and political instability had threatened to decimate a huge chunk of wildlife leading the ministry to adopt a different approach.

Speaking to Xinhua on Friday, Ministry of Environment and Tourism public relations officer Romeo Muyunda said some of the innovative approaches Namibia had adopted include "establishment of conservancies which have since provided opportunity for our local communities to generate income, supplemented by community based projects."

"In short, we created a platform where conservation leads to incentives for communities. If you protect our wildlife you get incentives such as employment and farming opportunities. These are the reasons our wildlife populations has increased, especially outside of national parks or protected areas," Muyunda said.

He said that in protected areas wildlife had also increased due to good management.

"Good management and effective policy has resulted in our wildlife increasing. An example of this is the elephant population that has increased from 7,500 at independence, up to more than 22,000 currently."

Muyunda told Xinhua that Namibia now had the largest population of black rhinos.

He said Namibia had managed to restore wildlife in areas where animals had begun to be wiped out.

"We have managed to restore wildlife in areas where animals had been wiped out due to poaching, political stability before independence and human wildlife conflict. These restorations are the fruits of our conservancy program," he said.