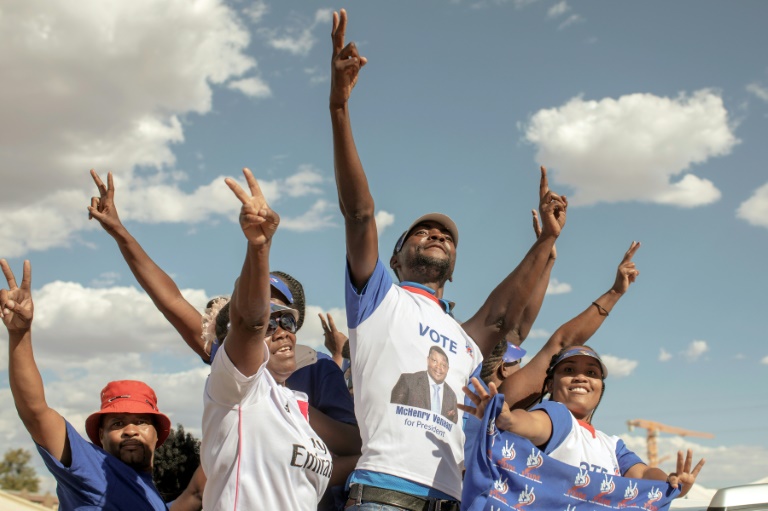 SWAPO's historic challenger, the Popular Democratic Party (PDM), is overshadowed by its affiliation with apartheid South Africa before independence, which continues to deter voters. (Photo: AFP)

Polls opened in Namibia on Wednesday for presidential and parliamentary elections in which resentment stoked by economic hardship and a corruption scandal could challenge the ruling party's majority.

The sparsely populated nation -- where the Namib desert stretches along 1,500 kilometres (930 miles) of Atlantic coastline -- has been ruled by the South West Africa People's Organisation (SWAPO) since independence from South Africa in 1990.

President Hage Geingob, who is vying for re-election after his first term was marred by a recession that stirred anger against SWAPO, was the first to cast his ballot at a primary school in the capital Windhoek.

He expressed confidence he would win, but said "If I lost I would accept also. I'm a democrat".

"This is not the war, this is not the end of the world. We are just exercising our democratic right," he told reporters outside the polling station.

SWAPO has continued to bask in the legacy of the liberation struggle in the resource-rich country.

"He (Itula) has acted as a lightning rod for frustrations and for people that are unhappy with the president," said Graham Hopwood of the Institute for Public Policy Research, Namibia's main think-tank.

While Geingob is widely expected to win, his result is predicted to drop from the 87 percent of votes he garnered in 2014.

Geingob's SWAPO-lead government took another hit earlier this month when Wikileaks released evidence of corruption in the fishing industry -- the country's second most important after mineral mining.

Two ministers resigned over the scandal, which allegedly involved 150 million Namibian dollars (US$10 million, 9.1 million euros). The ex-fisheries minister was briefly detained over the weekend.

Geingob has denied any involvement and said the timing was deliberately set up to damage his campaign.

In Windhoek's informal Havana settlement, where corrugated iron houses sprawl the city's outskirts, indignation against the government is rife.

Around 40 percent of urban dwellers live in shacks, according to the official figures for 2016.

Resource-rich Namibia is the world's second most unequal country after neighbouring South Africa, according to the World Bank.

The president has also come under fire for pumping money into bloated administration and granting contracts to foreign companies rather than boosting the local economy.

"We want to keep Namibia, we want to keep our resources," Itula told a crowd of cheering supporters at his closing rally on Monday.

But analysts believe the opposition remains too weak and ethnically divided to put up a credible fight.

SWAPO's historic challenger, the Popular Democratic Party (PDM), is overshadowed by its affiliation with apartheid South Africa before independence, which continues to deter voters.

The ruling party has enjoyed a two-thirds majority in parliament since 1994.

"A one-party state is not a country, that's why we need to make a change," said Abiud Hambira, 41, an unemployed teacher supporting the PDM's candidate McHenry Venaani.

He added that even if "we don't win, at least we can cut off the two-thirds majority", the threshold by which the constitution can be altered.

Eleven candidates are running for president and 15 parties are vying for seats in parliament.

Around 1.4 million people out of Namibia's 2.45 million inhabitants are registered to vote. Half are younger than 37 and many were born after independence.

"My parents have worked so hard in this struggle to get where they are today," said the 28-year old student.

"Peace in the country is more important to me because it will get me where I want in the future."

Polling opened on time at 7 am (0500 GMT) and will close at 9 pm (1900 GMT) across some 4,200 polling stations where the country is for the second time, using electronic voting machines.