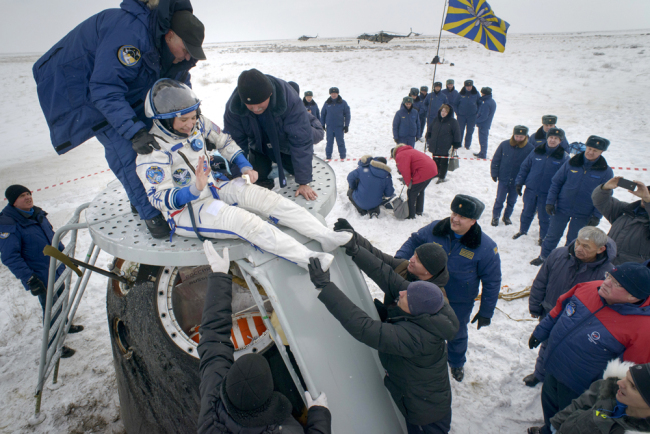 For the last 16 days of her mission, Auñón-Chancellor was joined by fellow NASA astronaut Anne McClain, marking the first time in which the only two U.S. astronauts on a mission both were women.

This was the first flight for Auñón-Chancellor and Prokopyev and the second for Gerst, who – with a total of 362 days in orbit – now holds the flight duration record among ESA astronauts.

Prokopyev completed two spacewalks totaling 15 hours and 31 minutes. During a 7 hour, 45 minute spacewalk Dec. 11, he and Oleg Kononenko of Roscosmos retrieved patch samples and took digital images of a repair made to the habitation module of the Soyuz MS-09 in which the Expedition 57 trio rode home. The space station crew located and, within hours of its detection, repaired a small hole inside the Soyuz in August. The spacecraft was thoroughly checked and deemed safe for return to Earth. 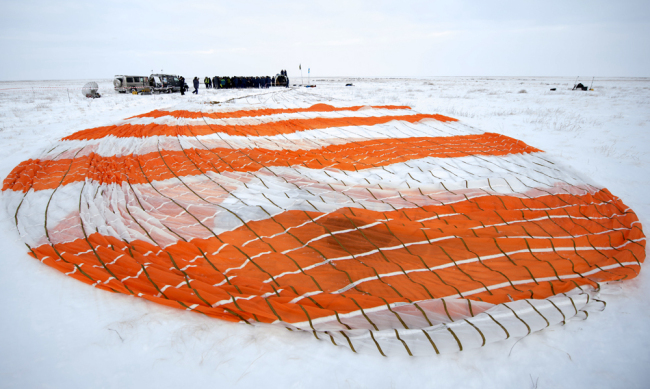 The parachute of the Soyuz MS-09 spacecraft is seen shortly the capsule landed with Expedition 57 in a remote area near the town of Zhezkazgan, Kazakhstan on Thursday, December 20, 2018. (Photo: AP)

When the Soyuz undocked at 8:40 p.m. Dec. 19, Expedition 58 began aboard the station, with McClain, David Saint-Jacques of the Canadian Space Agency, and Kononenko comprising a three-person crew. The next residents on the space station – Nick Hague and Christina Koch of NASA and Alexey Ovchinin of Roscosmos – will launch Feb. 28 from the Baikonur Cosmodrome in Kazakhstan to join their crewmates, marking the start of Expedition 59.

For more than 18 years, humans have lived and worked continuously aboard the station, advancing scientific knowledge and demonstrating new technologies, making research breakthroughs not possible on Earth that will enable long-duration human and robotic exploration into deep space. A global endeavor, more than 230 people from 18 countries have visited the unique microgravity laboratory that has hosted more than 2,400 research investigations from researchers in more than 103 countries.