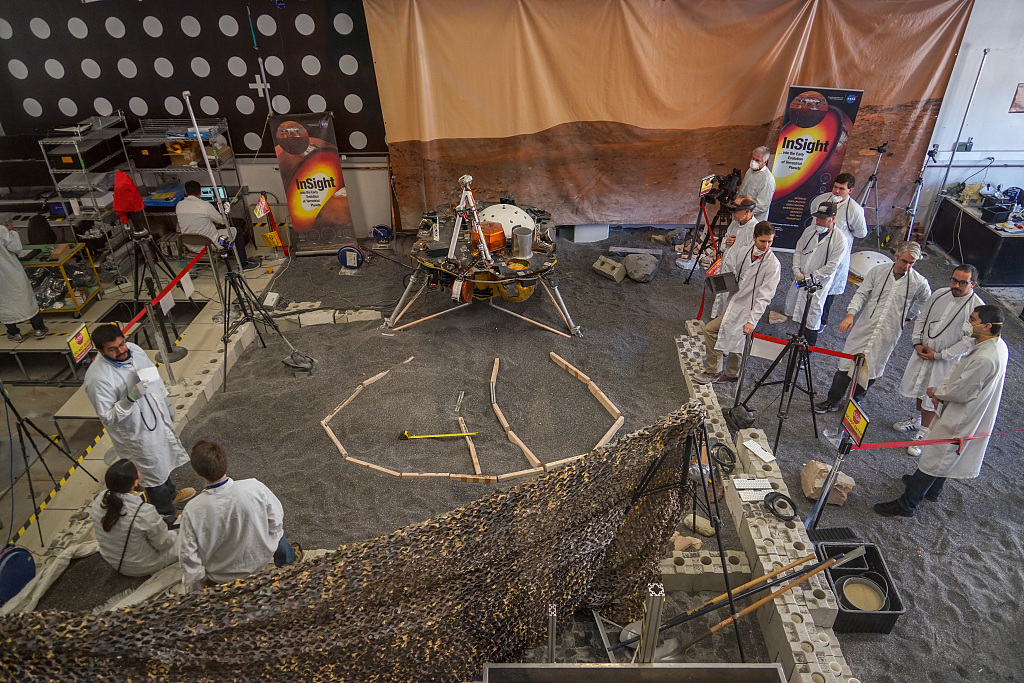 Engineers in Pasadena, California, sculpt a gravel-like material to mimic the terrain in front of NASA's InSight lander on Mars. Recreating the exact conditions will allow them to practice setting down the lander's instruments here on Earth before it's done on Mars. (Photo: VCG)

New images from the lander showed the seismometer on the ground, its copper-colored covering faintly illuminated in the Martian dusk, according to the InSight team on Thursday.

"InSight's timetable of activities on Mars has gone better than we hoped," said InSight Project Manager Tom Hoffman, who is based at NASA's Jet Propulsion Laboratory in Pasadena, California.

"Getting the seismometer safely on the ground is an awesome Christmas present," he said.

The InSight team has been working carefully toward deploying its two dedicated science instruments onto Martian soil since landing on Mars on Nov. 26. Besides the seismometer, also known as the Seismic Experiment for Interior Structure (SEIS), the other one is the heat probe, known as the Heat Flow and Physical Properties Probe (HP3).

Meanwhile, the Rotation and Interior Structure Experiment (RISE), which does not have its own separate instrument, has already begun using InSight's radio connection with Earth to collect preliminary data on the planet's core, said the InSight team.

To ensure the successful deployment of the instruments, engineers had to verify the robotic arm that picks up and places InSight's instruments onto the Martian surface was working properly.

They also had to analyze images of the Martian terrain around the lander to figure out the best places to deploy the instruments, said the team.

InSight engineers sent up the commands to the spacecraft on Tuesday, and the seismometer was gently placed onto the ground by the arm in front of the lander on Wednesday, according to the team.

"The seismometer is the highest-priority instrument on InSight. We need it in order to complete about three-quarters of our science objectives," he said.

The seismometer allows scientists to peer into the Martian interior by studying ground motion, also known as marsquakes. By analyzing how seismic waves pass through the layers of the planet, scientists can deduce the depth and composition of these layers.

The heat probe is scheduled to be placed onto the Martian surface by late January, on the east side of the lander's work space, according to the team.

InSight landed safely on Mars on Nov. 26, kicking off a two-year mission to explore the deep interior of the Red Planet.