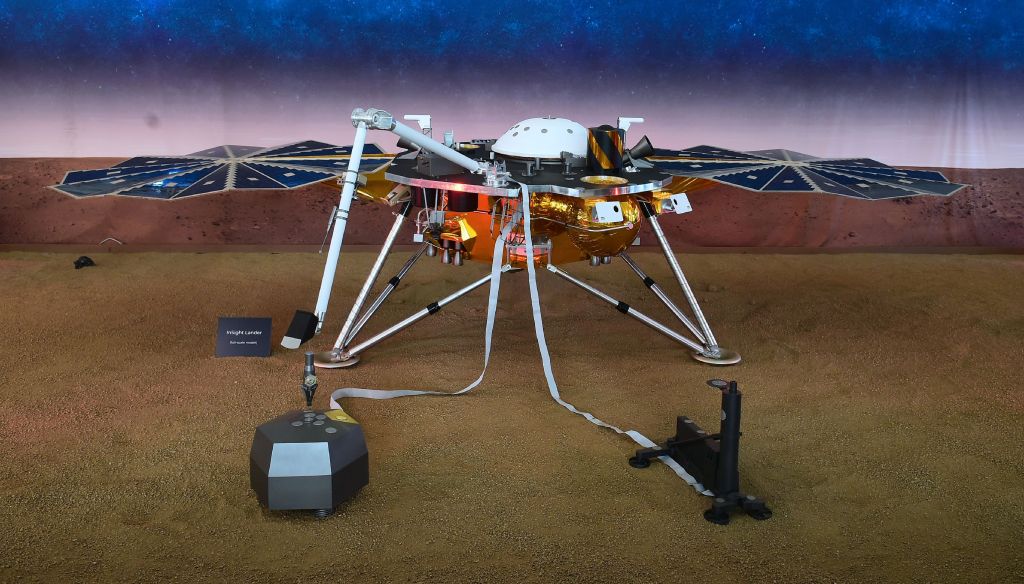 A replica of the InSight Mars Lander on display at the NASA Jet Propulsion Laboratory (JPL) in Pasadena, California on November 26, 2018. (Photo: AFP)

LOS ANGELES, Nov. 27 (Xinhua) -- NASA's InSight spacecraft has sent signals to Earth after its successful landing on Mars, indicating that its solar panels are open and collecting sunlight on the Martian surface.

NASA's Mars Odyssey orbiter relayed the signals as well as images showing InSight's landing site, according to a release of NASA on Tuesday.

The solar array deployment ensures the spacecraft can recharge its batteries each day.

He said it started an exciting new chapter for InSight: surface operations and the beginning of the instrument deployment phase.

According to NASA, InSight's twin solar arrays are each 2.2 meters wide. When they're open, the entire lander is about the size of a big 1960s convertible.

Mars has weaker sunlight than Earth because it's much farther away from the Sun. But the lander does not need much to operate. The panels provide 600 to 700 watts on a clear day, plenty to keep InSight's instruments conducting science on the Red Planet, said NASA.

The panels are modeled on those used with NASA's Phoenix Mars Lander, though InSight's are slightly larger in order to provide more power output and to increase their structural strength. These changes were necessary to support operations for one full Mars year (two Earth years), according to NASA.

In the coming days, the mission team will unstow InSight's robotic arm and use the attached camera to snap photos of the ground so that engineers can decide where to place the spacecraft's scientific instruments. It will take two to three months before those instruments are fully deployed and send back data.

In the meantime, InSight will use its weather sensors and magnetometer to take readings from its landing site at Elysium Planitia -- its new home on Mars.

The InSight spacecraft touched down safely on Mars on Monday after a six-month, 300-million-mile (480-million-km) journey, kicking off its two-year mission to explore the deep interior of another world.

Launched on May 5, InSight marks NASA's first landing on Mars since the Curiosity rover in 2012 and the first dedicated to studying the deep interior of Mars.