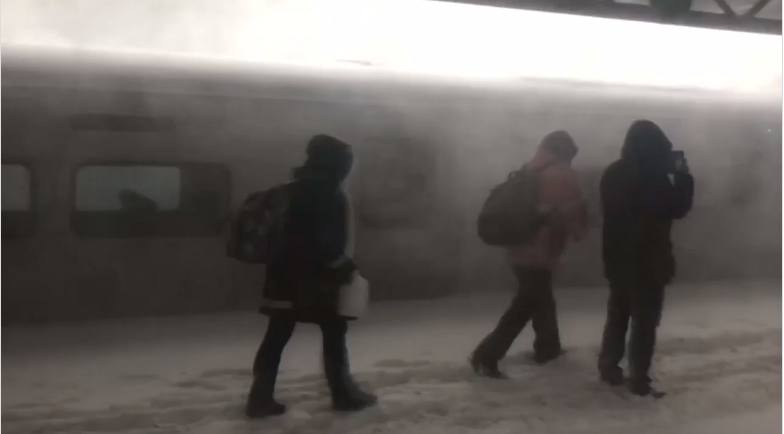 A powerful blizzard battered the US Northeast on Thursday, knocking out power for tens of thousands of people and snarling travel amid a cold snap that has gripped much of the United States for over a week and killed more than a dozen people.

Thousands of flights were canceled, firefighters scrambled to rescue motorists from flooded streets in Boston, National Guard troops were mobilized in the Northeast and New York City’s two main airports halted flights because of whiteout conditions.

“Today, I thought Manhattan was going to have the streets cleaned up, but I see not,” said Valentine Williams, who usually operates an electric scooter to deliver food in New York City.

The snow forced Williams, 28, to make deliveries on foot. No customers complained that he was slower than usual. “They’re just surprised that I‘m out here,” he added.

Officials feared fast-dropping temperatures after the storm passed would turn snow on roadways to ice.

Ahead of that threat, snow plows and salt trucks were dispatched along streets and highways, and schools were closed through much of the region. In Boston, Mayor Marty Walsh said schools would remain closed on Friday.

Blizzard warnings were in effect along the East Coast from North Carolina to Maine. The US National Weather Service measured wind gusts of more than 70 miles per hour (113 kph), which downed power lines.

Almost 80,000 homes and businesses in the Northeast and Southeast, where the storm struck on Wednesday, were without power.

The Boston area received 12 inches of snow, with more on the way, according to the National Weather Service. Parts of New Jersey were buried under nearly a foot and a half of powder.

The storm was powered by a rapid plunge in barometric pressure that some weather forecasters called a bombogenesis, or a “bomb cyclone.” It brought high winds and swift, heavy snowfall.

The wintry weather has been blamed for at least 14 deaths in the past few days, including four in North Carolina traffic accidents and three in Texas because of the cold.

Nearly 500 members of the National Guard were activated along the East Coast to assist with emergency response, including 200 in New York state, the US Department of Defense said in a statement. 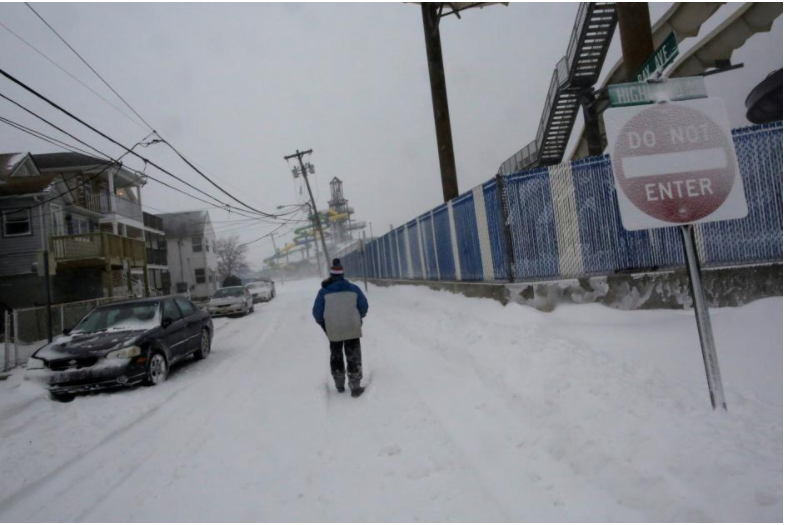 A man walks near one of the water parks during Storm Grayson at the Jersey shore in Keansburg, New Jersey, US, January 4, 2018. Photo: Reuters/Eduardo Munoz

More than 5,000 US airline flights were canceled. At New York’s John F. Kennedy (JFK) and LaGuardia airports, all flights were temporarily halted because of whiteout conditions, the Federal Aviation Administration said. LaGuardia on Thursday evening announced on Twitter that the suspension had been lifted. But the Port Authority of New York and New Jersey said flights at JFK would not resume until 7 a.m. Friday.

“There were only local trains, no express,” Khan, 30, said as he hunched with an electric drill trying to fix the handle of his snow shovel inside the convenience store where he works.

A 3-foot (0.9-meter) tidal surge flooded the area around Boston’s historic Long Wharf with icy seawater. Firefighters used an inflatable raft to rescue one motorist from a car submerged in water up to its door handles, Boston Fire Commissioner Joseph Finn told reporters.

Boston officials briefly thought they would need to a evacuate a shelter near the flooded areas, Walsh said.

Officials reported traffic accidents throughout the Northeast and the storm’s reach extended to eastern Canada.

On Wednesday, the same storm brought historic cities in the Southeastern United States their heaviest snowfall in three decades.