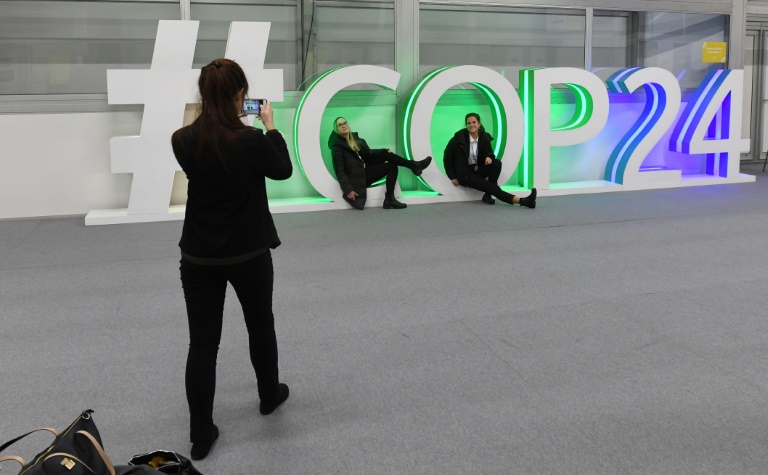 Participants pose for a picture during the final session of the COP24 summit on climate change in Katowice, Poland, on December 14,2018.(Photo: AFP）

Nations on Saturday inched towards a deal to implement the Paris climate goals, after all-night negotiations over a plan to limit global temperature rises exposed a range of conflicts.

Speaking to AFP at the COP24 summit in Poland, a senior negotiator said delegates from nearly 200 nations had reached a "landing zone" of agreement.

But sources close to the talks said differences remained stark on the issues of ambition, how the climate fight is funded and how best to measure and ensure the fairness of each nation's efforts to reduce emissions.

Delegates at the UN summit, held this year in the Polish mining city of Katowice, must agree on a common rule book to put the pledges made at the landmark 2015 Paris talks into practice.

This means all countries, rich and poor alike, must agree to action that will cap global temperature rises to "well below" two degrees Celsius (3.6 degrees Fahrenheit) and stave off the worst effects of planetary warming, and to a safer cap of 1.5C if possible.

The final draft decision text was repeatedly delayed as negotiators sought to form guidelines that are effective in slashing emissions while protecting the economies of rich and poor nations alike.

"Without a clear rulebook, we won't see how countries are tracking, whether they are actually doing what they say they are doing," Canada's Environment Minister Catherine McKenna told AFP.

Earlier in the day, Gebru Jember Endalew, chair of the Least Developed Countries negotiating group, said delegates had reached a "landing zone" of compromise after negotiations sailed past their Friday deadline and deep into the weekend.

"It is a bit difficult to compromise when there are 190-plus countries," he told AFP.

At the heart of the matter is how each nation funds action to mitigate and adapt to climate change, as well as how those actions are reported.

Developing nations want more clarity from richer ones over how the future climate fight will be funded and have been pushing for so-called "loss and damage" measures.

This would see richer countries giving money now to help deal with the effects of climate change many vulnerable states are already experiencing.

Another contentious issue concerns the integrity of carbon markets, looking ahead to the day when the patchwork of distinct exchanges -- in China, the Europe Union, parts of the United States -- may be joined up in a global system.

"To tap that potential, you have to get the rules right," said Alex Hanafi, lead counsel for the Environmental Defense Fund in the United States.

"One of those key rules -- which is the bedrock of carbon markets -- is no double counting of emissions reductions."

The Paris Agreement calls for setting up a mechanism to guard against practices that could undermine such a market, but finding a solution has proved so problematic that the debate has been kicked down the road to next year.

Some observers had accused Brazil of seeking to muddy the date by which the provisions should enter into force, although its chief negotiator told AFP it was working "constructively with other parties to find a workable pathway forward."

'A deal within reach'

Another stumbling block could be how ambitious countries are in their renewed emissions-cutting pledges ahead of a 2020 stock-take of the Paris deal's progress.

Most nations wanted the findings of the Intergovernmental Panel on Climate Change (IPCC) to form a key part of future planning. It highlighted the need for greenhouse gas emissions to be slashed to nearly half by 2030 in order to hit the 1.5C target.

But the US, Saudi Arabia, Russia and Kuwait objected, leading to watered-down wording.

The draft decision statement from the Polish COP24 presidency welcomed "the timely conclusion" of the report and invited "parties to make use of it" -- far from the ringing endorsement many nations had called for.

"We need to be ambitious, we need to do more, we need to reflect the goals of 1.5 degrees of global warming," said McKenna.