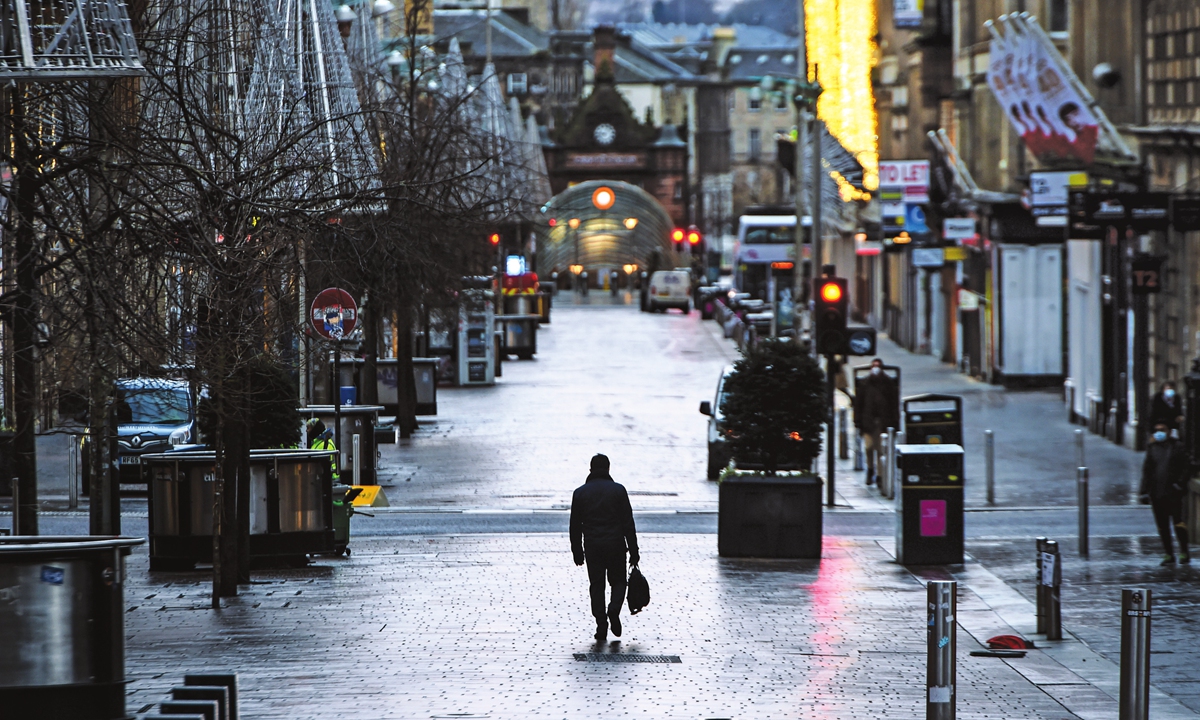 Pedestrians walk through central Glasgow as Britain enters a national lockdown in London on Tuesday. Scotland is to impose a nationwide coronavirus lockdown for the rest of January because of a surge in cases, First Minister Nicola Sturgeon announced. (Photo: AFP)

UN climate negotiations have not broached the crucial issue of how the world pays for the fight against global warming, the organization's climate chief told AFP Wednesday, as three weeks of virtual talks approached their conclusion.

The discussions - the first under the UN's watch since December 2019 - were designed to bring countries closer together on key issues left over from previous sessions ahead of November's COP26 summit in Glasgow.

But "not all of the issues were addressed, simply because there is not enough time. Finance was not addressed at the session," Patricia Espinosa told AFP.

The informal talks were supposed to broach a range of topics, including final elements of the "rulebook" to the 2015 Paris Agreement governing carbon markets and how financial contributions to the climate fight are reported.

Countries aimed to hash out final elements of the "rulebook" to the 2015 Paris Agreement governing carbon markets and how financial contributions to the climate fight are reported.

Rich nations have yet to live up to their pledge to provide $100 billion a year to countries most at risk from the impact of climate change.

Last week G7 leaders recommitted to that goal, yet funding available for climate adaptation remains significantly below the target.

Espinosa said the informal talks - held online due to COVID-19 - had largely achieved their objective in getting nations speaking again.

"We managed to get all the parties to come together and start talking about the substantive issues," she said in an interview.

"This is important because of the fact that for the past year and a half we have not been able to meet at all."

Espinosa said realizing the commitment on finance would be a "central element for a successful outcome at COP26."

"$100 billion is a lot of money but we also know what is required for the deep transformation that is needed is much more," she said.

The nature of the rich world's obligation to support developing countries to adapt to the impact of climate change was very different to normal development assistance, she said.

"We are facing a problem that has an origin in the way that the developed world was able to grow and therefore we have a global problem and responsibilities," Espinosa said.

Espinosa said that for COP26 to be a success, nations would need to redouble commitments to slash emissions and help pay for climate change impacts.

"Success [in Glasgow] will be if the big message coming out of the conference is that the 1.5 C goal is still within reach," she said.

"If you look at the figures it's really not so clear. But if we can show an increase in ambition that brings us closer to the goal of reducing 45 percent of emissions by 2030, that would be very important."