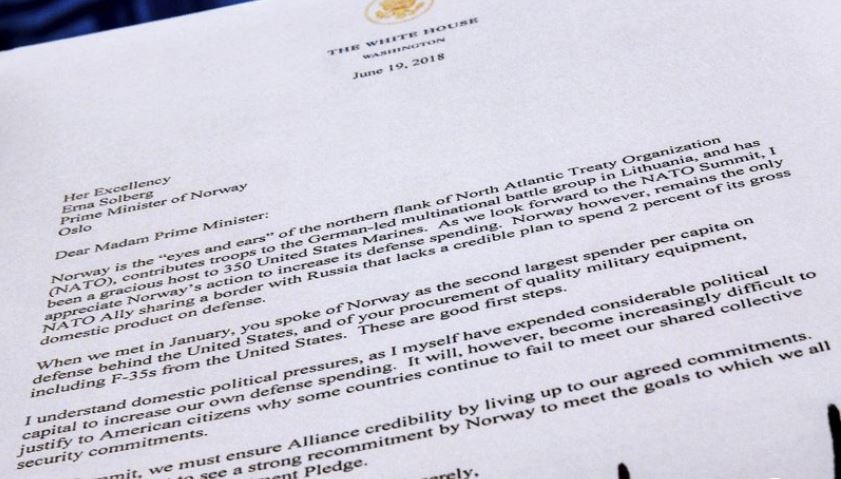 A copy of a letter sent to the Prime Minister Erna Solberg of Norway by US President Donald Trump demanding an increase in Norway’s NATO spending is photographed in Washington, Tuesday, July 3, 2018. The letter was supplied to the Associated Press by the Norwegian Defense Ministry. (Photo: AP/J. David Ake)

NATO allies are pushing back against US criticism that they are not spending enough on defense, as US President Donald Trump ratchets up pressure ahead of a summit next week.

In the last few weeks before NATO’s July 11-12 summit in Brussels, Trump sent letters to Norway, other European allies and Canada demanding that they boost defense spending.

After Russia annexed Ukraine’s Crimean Peninsula in 2014, NATO allies agreed that year to end defense budget cuts, start spending more as their economies grew and move toward a goal of 2 percent of GDP for defense spending within a decade.

In an email Tuesday to The Associated Press, Norwegian Defense Minister Frank Bakke-Jensen said “Norway stands by its decision of the NATO Summit in 2014 and is following up on this.”

Norway has spent “far beyond” NATO’s target on new military equipment, he added.

German Defense Minister Ursula von der Leyen said Tuesday that “we stand by the 2 percent goal we’ve set.” She added that “we’re on the path there. And we’re prepared ... to take substantial responsibility within the alliance.”

When faced with the suggestion that such German explanations for not spending 2 percent of GDP yet might not make an impression on Trump, she retorted: “We don’t want to impress anyone.”

The upcoming NATO summit is the first major meeting since the fractious Group of Seven talks in Canada last month. NATO officials are concerned that trans-Atlantic divisions over trade tariffs and the US pullout from the Paris global climate agreement and the Iran nuclear deal could undermine alliance unity.

In the letter to Norwegian Prime Minister Erna Solberg, dated June 19, Trump wrote that despite her country’s important role in the alliance Norway “remains the only NATO ally sharing a border with Russia that lacks a credible plan to spend 2 percent of its gross domestic product on defense.”

The stance was repeated in a similar letter to Belgium, where Trump said it will “become increasingly difficult to justify to American citizens why some countries continue to fail to meet our shared collective security commitments.”

Trump dressed down his NATO counterparts last year, publicly berating them for not spending enough and claiming they owe the US money. When he first came to office he even suggested that the US — by far NATO’s most powerful ally — might not protect countries that don’t pull their weight.

Belgian Prime Minister Charles Michel played down the importance of the letter he received, saying it was “typical” of things sent ahead of meetings like the NATO summit.

“I am not too intimidated by this type of mail,” he said, adding that Belgium is doing its part in the military alliance.

“We participate in many military operations with our NATO allies and it is this government that decided to end the systematic reduction of defense spending,” he said.

In Canada, Defense Minister Harjit Sajjan’s chief of communications said the government has committed to increasing funding by more than 70 percent over the next decade.

“This plan has been rigorously costed, is fully funded, and serves Canada’s defense needs. It also upholds our long-standing role as an active contributor to global peace and security,” said Director of Communications Renée Filiatrault.

Despite the political rhetoric from the Trump administration, the 2 percent figure does not concern spending on NATO and no one owes the alliance or any ally money. It is about the size of national defense budgets only. Other factors that nations take into consideration when looking at burden-sharing are the amount of money spent on new military equipment and contributions to NATO operations.

But the US spends more on defense than all the others combined — 3.61 percent of GDP in 2016, or around $664 billion. That’s roughly two thirds of total spending on national budgets, according to NATO estimates.

Trump argues that a pledge was made and must be kept.

“The president has publicly shared his frustration that he’d like to see other countries step up and do more, particularly when they have the capability and they’ve made the commitment to do 2 percent. He’d like to see them fulfill that commitment,” White House press secretary Sarah Huckabee said Tuesday.

“The United States has more than surpassed that and is carrying a lot of that burden and he wants to see other countries that have the capability to do that step up and do the part that they committed to do,” she told reporters.

Others argue the 2 percent pledge is a guideline only.

“You can ask 10 lawyers to provide a legal interpretation of that document and then you will have, I guess, 10 different interpretations,” NATO Secretary-General Jens Stoltenberg said. “This document is not a legal document. It is a political document with a political commitment.”