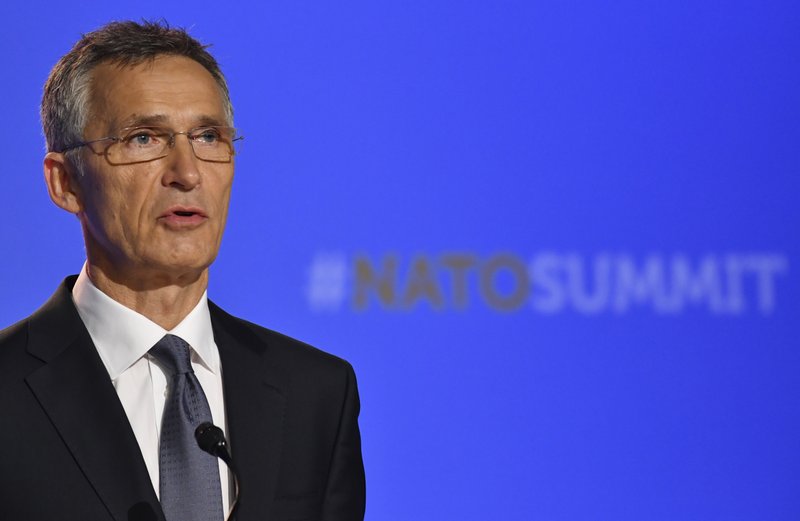 The Latest on President Donald Trump’s trip to Europe (all times local):

NATO chief Jens Stoltenberg says that despite President Donald Trump’s fire-and-brimstone approach to this week’s summit, the US president has had an impact on the commitment by alliance members to boost their individual military spending.

Stoltenberg says Thursday that “the clear message from President Trump is having an impact.”

Since taking office, Trump has been criticizing most alliance members for not spending more on their militaries and pressing them to do more.

Stoltenberg says Trump’s approach is paying off. The NATO secretary-general says allies have added $41 billion extra for defense spending — a figure he cited on Wednesday.

President Donald Trump has arrived in Great Britain for his first visit as president amid NATO tensions, protests and Brexit turmoil.

Air Force One has landed at London Stansted Airport, where Trump is beginning a four-day visit to the country.

On Friday, Trump will meet with Prime Minister Theresa May and Queen Elizabeth II and then spend the weekend at one of his private golf courses in Scotland.

Widespread protests of Trump are expected during his visit to the UK, which comes during a tumultuous week for May’s government as it seeks to navigate the Brexit process. Trump is arriving following a chaotic NATO summit.

US President Donald Trump is forecasting an unspecified “escalation” between the US and Iran.

Trump also says Iran is treating the US with more respect, though there is no evidence to support Trump’s claim.

Trump withdrew the US from the Iran nuclear deal earlier this year, reinstating economic sanctions that had been lifted under a deal among Iran, the US and other world powers in exchange for curbs on Iran’s nuclear program.

Trump was asked about Iran at a news conference in Brussels, where he wrapped up his participation in a NATO summit.

He says Iran is feeling a lot of pain as a result and that at some point Iran will “call me and they’re going to say let’s make a deal, and we’ll make a deal.”

Macron said: There is a communique that was published yesterday. It’s very detailed.”

The summit statement affirms a commitment made in 2014 after Russia annexed Crimea that NATO allies would halt defense spending cuts and start spending more as their economies grow, with the aim of moving toward 2 percent of GDP within a decade.

US President Donald Trump is offering assurances that the United States will “ultimately” work out a “pretty nasty trade battle” with China.

The Trump administration has threatened to impose 10 percent tariffs on another $200 billion worth of Chinese imports, and Beijing has vowed to retaliate.

It follows the US imposing 25 percent duties on $34 billion of Chinese goods, which China responded to by increasing its own taxes on the same amount of American imports.

US President Donald Trump says Russian President Vladimir Putin is neither friend nor foe. Instead, the US leader calls Putin a “competitor” and says he is representing the best interests of the Russian people as he represents those of Americans.

Speaking during an unscheduled press conference at the NATO summit in Brussels, Trump says his sit-down with Putin will be “just a loose meeting,” but said significant progress could be made in the relationship. The US and Russia leaders are to meet Monday in Helsinki.

Trump’s meeting with Putin has been met by skepticism from NATO allies concerned that he will not be sufficiently tough with the leader. Trump says he will raise Russian election meddling in Western elections with Putin.

Thousands are gearing up in London to protest US President Donald Trump’s first official visit to the UK because of anger over his policies on issues ranging from immigration and race relations to Russia and the Middle East.

Demonstrations are planned Thursday outside the US ambassador’s residence in London, where Trump will stay, and Winston Churchill’s birthplace at Blenheim Palace, where he’ll attend a black-tie dinner.

The biggest protests are set for Friday, when demonstrators plan to march through central London and float a huge balloon depicting Trump as a baby in diapers over the Houses of Parliament.

The National Police Chiefs Council says rest days for officers have been cancelled and many will be working 12-hour shifts during Trump’s visit.

Trump also says he is “not happy about Crimea.” Russia annexed the Crimean Peninsula from Ukraine in 2014. Trump continues to blame his predecessor, President Barack Obama, for allowing that to happen.

Speaking at a news conference during a NATO summit in Brussels, Trump says Thursday that alliance members “actually thanked me” for meeting with Putin.

Trump has been criticized for seeking the one-on-one meeting with Putin, scheduled for Monday in Helsinki, in part because of Russian meddling in the 2016 presidential election.

Trump describes it as a “loose meeting” and says “we’ll see where it leads.”

Says Trump: “I think meeting with people is great.”

US President Donald Trump says after an emergency session of NATO members, the military alliance is “very unified, very strong, no problem.”

The president is speaking at a news conference in Brussels along the sidelines of the annual NATO summit. He says he successfully pushed for NATO members to spend more of their budgets on defense and at a faster pace than previously expected.

Trump says NATO is “more coordinated” and there’s a “better spirit for NATO” even amid reports that he threated to pull the United States out of the alliance in a dispute over defense spending.

US President Donald Trump says he probably can withdraw the US from NATO but that such a step is “unnecessary.”

Published reports Thursday said Trump had threatened during the NATO summit in Brussels to pull the US out of the military alliance in a dispute over defense spending.

Trump says at a news conference that he was “extremely unhappy” with the situation, but that alliance members have upped their commitment in response to his complaints.

Asked whether he’s still threatening to pull out of NATO and whether he can do so without buy-in from Congress, Trump said: “I think I probably can but that’s unnecessary.”

US President Donald Trump says he told NATO allies that he was “extremely unhappy” with the level of defense spending but received a commitment from the member nations for them to spend more.

Trump says during a news conference in Brussels that NATO members have agreed to pursue defense spending of at least 2 percent of their GDP at a faster rate than the current 2024 timeline.

US President Donald Trump says the US commitment to NATO “remains very strong” despite reports that he threated to pull out in a dispute over defense spending.

Trump says at a news conference Thursday in Brussels that he told “people” that he would be “very unhappy” if they didn’t increase their commitments.

Trump says the US has been paying “probably 90 percent of the costs of NATO.”

Trump adds that he was “extremely unhappy with what was happening and they have substantially upped their commitment.”

Trump once declared NATO “obsolete.” He says Thursday: “I believe in NATO.”

President Donald Trump plans to make a statement at the NATO summit in Brussels.

The White House says the president will address reporters before he departs for the United Kingdom, the next stop on his weeklong visit to Europe.

The statement follows tense discussions at the summit over Trump’s criticism of most NATO allies for not spending 2 percent of their GDP on defense as well as his demand that they immediately double such spending. Trump also criticized Germany over a natural gas pipeline deal with Russia.

Two officials at the summit say the alliance is currently meeting in an emergency session amid Trump’s demands.

President Donald Trump has arrived at NATO headquarters, where he’s attending a second day of meetings with leaders of the military alliance.

Trump was running behind schedule Thursday morning and arrived at the Brussels site a good half an hour later than expected.

A meeting of the North Atlantic Council with Georgia and Ukraine that Trump was scheduled to attend was called into order around 8:50 a.m. Trump arrived around 9:15 a.m.

Other leaders have also been trickling in, and continue to arrive after Trump.

The president is expected to meet with the leaders of Azerbaijan, Romania, Ukraine and Georgia before he travels to London Thursday.

President Donald Trump is continuing to hammer NATO nations over their defense spending as he prepares for a second day of meetings in Brussels.

Trump says presidents have been trying to get “Germany and other rich NATO Nations” to pay toward protection from Russia.

He says the US “pays tens of Billions of Dollars too much to subsidize Europe” and is demanding members meet their pledge to spend 2 percent of GDP on defense. He says it “must ultimately” go to 4 percent.

Trump’s railing against a German pipeline deal with Russia, saying it’s “Not acceptable!”

He’s also weighing in on news from the Russia investigation that former FBI lawyer Lisa Page is resisting a subpoena.

Trump alleges, “So much corruption on the other side. Where is the Attorney General?”

President Donald Trump will be meeting with the leaders of Azerbaijan, Romania, Ukraine and Georgia as he kicks off his second day at the NATO summit in Brussels.

The president will also be attending a pair of meetings of the North Atlantic Council before he departs for the United Kingdom.

Trump’s first day of meetings with leaders of the military alliance was contentious, with Trump demanding nations spend far more on defense and accusing Germany of being “totally controlled” by Russia because of a pipeline project.

Trump’s next stop will be London, where he’ll be meeting with Queen Elizabeth II and British Prime Minister Theresa May.

May’s government is in turmoil over how to exit the European Union following the Brexit vote.

President Donald Trump is tearing into this week’s NATO summit. He’s questioning the value of a military alliance that has defined decades of American foreign policy, torching an ally and proposing a massive increase in European defense spending.

Trump on Wednesday turned a harsh spotlight on Germany’s own ties to Russia. He declared that a natural gas pipeline venture with Moscow has left Angela Merkel’s government “totally controlled” and “captive” to Russia.

The attack against a core ally comes days before Trump is set to meet one-on-one with Russia’s Vladimir Putin.

Trump questioned the necessity of the alliance that formed a bulwark against Soviet aggression.

He tweeted after a day of contentious meetings: “What good is NATO if Germany is paying Russia billions of dollars for gas and energy?”