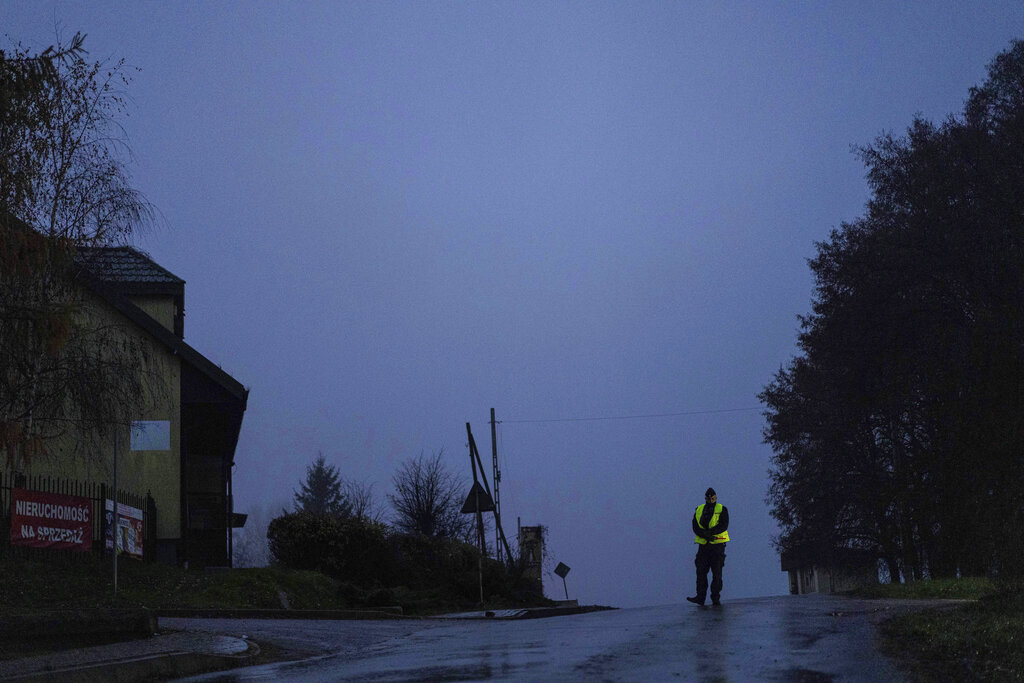 A police officer stands at a checkpoint near the scene of a blast in Przewodow, Poland, Wednesday, Nov. 16, 2022. Poland said Wednesday that a Russian-made missile fell in the country's east, though U.S. President Joe Biden said it was "unlikely" it was fired from Russia. (Photo: AP)

Jens Stoltenberg, secretary general of the North Atlantic Treaty Organization (NATO), said in Brussels on Wednesday that the explosion at the Polish village of Przewodow near the border with Ukraine on Tuesday night was likely not an attack from Russia but was caused by a Ukrainian air defense missile. Two people were killed in the blast.

Addressing a press conference in Warsaw following a meeting of his country's National Security Bureau on Wednesday, Poland's President Andrzej Duda echoed Stoltenberg's statement, saying that "We have no proof at this stage that it was a missile launched by Russia. There are many indications that it was an air defense missile that unfortunately fell on Polish territory." He said the missile was most likely a Russian-made S-300 rocket, probably manufactured in the 1970s.

Citing the findings of a preliminary analysis of the debris found at the site of the explosion, Stoltenberg said after a NATO emergency meeting in the Belgian capital on this issue that "We have no indication that this was the result of a deliberate attack. And we have no indication that Russia is preparing offensive military actions against NATO."

"The incident," he said, "was likely caused by a Ukrainian air defense missile fired to defend Ukrainian territory against Russian cruise missile attacks."

An investigation is ongoing, Stoltenberg and Duda both said. Stoltenberg called for patience and cautioned against jumping to conclusions -- a stance supported by all NATO allies.

"I spoke to President Duda last night, we agreed on the importance of waiting for the outcome of the investigation. We don't have the final outcome of the ongoing investigation, but all allies agree on the assessment I just shared, that we have no indication that this was a deliberate attack and of course that has consequences for what kind of responses we need to take," he said.

He underlined the need to prevent any escalation.

"We agreed that we need to stay vigilant, calm and closely coordinated. We will continue to consult. And monitor the situation very closely," he said.

Poland's Prime Minister Mateusz Morawiecki said that it may not be necessary to activate Article 4 of the NATO Treaty.

Article 4 states that "the Parties will consult together whenever, in the opinion of any of them, the territorial integrity, political independence, or security of any of the Parties is threatened."

Nevertheless, Poland has put some military units on a heightened state of readiness.

In Moscow, Russia's Defense Ministry denied reports that Russian missiles had hit Polish territory, describing them as a "deliberate provocation aimed at escalating the situation."

"No strikes on targets near the Ukrainian-Polish state border were made by Russian means of destruction," it said in a statement.

Since the beginning of the Russia-Ukraine conflict in February, NATO has reinforced its presence on the eastern flank of the alliance.

Asked if Tuesday's incident was a failure of NATO systems in place to keep its territories safe, Stoltenberg explained that NATO's air defense systems were calibrated against specific types of attack missiles and that the Ukrainian rockets did not belong to that category.

NATO and its allies offered condolences for the loss of lives in the incident.