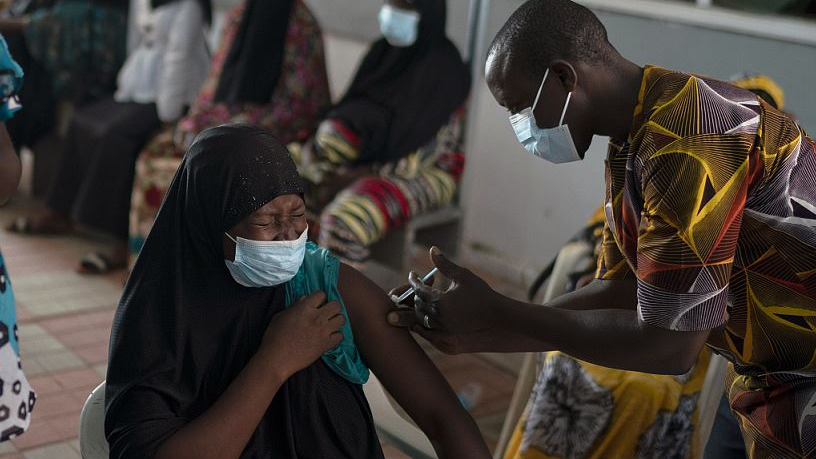 A health worker administers a dose of the Johnson & Johnson COVID-19 vaccine at the Bundung Maternal and Child Health Hospital in Serrekunda, outskirts of Banjul, Gambia, Thursday, September 23, 2021. (Photo by Leo Correa via CFP)

The number of people that have been fully vaccinated against COVID-19 in The Gambia has surpassed the 230,000 mark as the country continues its mass inoculation drive.

According to the data published by the country's health ministry, a total of 230,044 have completed their vaccinations, representing nearly 10 percent of the country’s population.

Gambian government is on high alert following the emergence of the new Omicron variant, which has already spread to multiple countries in Africa.

On Thursday, the health ministry announced new travel conditions in efforts to curb importation of the new strain, which is believed to spread faster than previous variants.

In the new directive, passengers should provide a negative PCR result from tests taken within 72 hours before being allowed into the country.

The health ministry published a list of countries considered to be hotspots for the Delta variant. Passengers from these countries will be required to additionally take a Rapid Diagnostic Test at the airport upon arrival.

Another list of countries considered to be hotspots for the Omicron variant was also published, with countries including South Africa, Botswana, Eswatini, Lesotho, Malawi, Mozambique, Namibia, Zimbabwe, Angola and Zambia.

Passengers from these countries will have to go into mandatory quarantine upon arrival, until they take a PCR test and it returns a negative result.