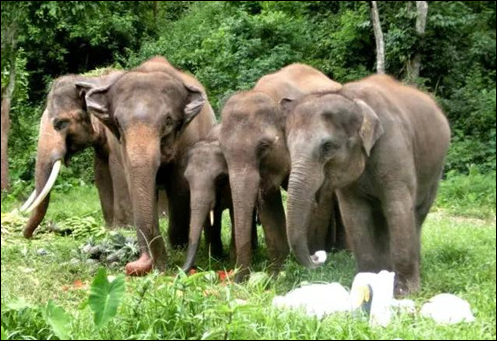 Nearly 100 elephants enjoyed a day-off and picnic with their favorite food in Sauraha town of Nepal's tourism hub Chitwan on Thursday afternoon.

The unique elephant picnic program was organized as a part of the ongoing 15th Chitwan Elephant Festival. Elephant picnic was added to the annual festival's schedule a few years ago to provide leisure to the elephants, who take people on jungle safari trips.

According to the organizer, the picnic aims to provide attention, love and respect to the elephants and bring them closer with humans.

"Elephants serve human beings during safari and other activities throughout the year. So, we tend to return them the love and affection that they deserve. Picnic boosts the bonding between people and elephants," Deepak Bhattarai, vice president of Regional Hotel Association Chitwan told Xinhua on the spot.

On the occasion, elephants were served with their favorite food including sugarcane, pumpkin, grasses, bananas, apples, oranges and cabbages. A single elephant was fed with nearly 50 kg of nutritious food, which comprised vitamins and minerals, in their special day.

They also enjoyed a day-off from their regular busy safari schedule. Over 50 elephants conduct safari in the Chitwan National Park every morning.

The picnic comes at a time when animal activists have been raising their voice against animals being used for adventure or entertainment purpose.

"We have been trying our best to lighten labor intensity of elephants, for which we have limited the number of safari to one or two per day for each elephant," Bhattarai said.

Hundreds of domestic and foreign tourists attended the hour-long picnic while mahouts were also treated with special delicacies.

"I am very lucky to be here and humbled to interact with the elephants. This is so amazing. I must say Nepal has a beautiful culture," a young Canadian tourist, who was among those who fed the elephants with the delicacies, told Xinhua.

Chitwan is a popular tourism destination in the Himalayan country. Chitwan National Park, some 160 km from the capital Kathmandu, is a pioneer hub for wildlife adventures, especially elephant safari.

According to local tourism entrepreneurs, the region's tourism has been witnessing impressive inflow of foreign tourists especially from neighboring countries such as China and India.