The deaths took place at the hospitals in Rajkot and Ahmedabad districts, west of Gandhinagar city, the capital of Gujarat.

"In the month of December, 111 children died here," Dr Manish Mehta, dean at Rajkot civil hospital told media. "We don't have enough facilities to treat the number of patients we receive."

Likewise, the superintendent of Ahmedabad civil hospital, Dr. G S Rathod said deaths of 85 infants were recorded at the hospital in December.

"In December, 455 newborns were admitted in neo-natal intensive care unit (ICU). Of them 85 died," Rathod said.

Meanwhile, Gujarat Chief Minister Vijay Rupani on Sunday refused to comment on the infant deaths in his state and walked away after journalists asked him about the issue.

Gujarat is another Indian state after Rajasthan that is making headlines for infant deaths at government-run hospitals.

In December, over 100 deaths were reported at a government run hospital at Kota district in adjacent Rajasthan state.

India's human rights panel, National Human Rights Commission (NHRC), has taken suo motu cognizance of the infant deaths at hospital in Rajasthan and issued notice to the local government over the issue.

The child deaths in Rajasthan triggered a slugfest between ruling Bhartiya Janta Party (BJP) and the local government in Rajasthan headed by Congress party. The BJP attacked Rajasthan government of failing to provide medical care facilities to the new born in the state.

However, the deaths in Gujarat, which is BJP ruled state has brought the ruling party in tightspot and the issue is likely to haunt the party in the days to come. 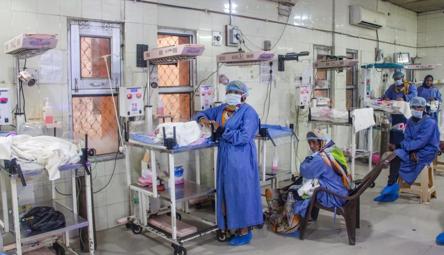