Negotiations on choosing the new leaders of European Union institutions will be long and arduous, as divergence over candidates for these jobs seems larger than ever. 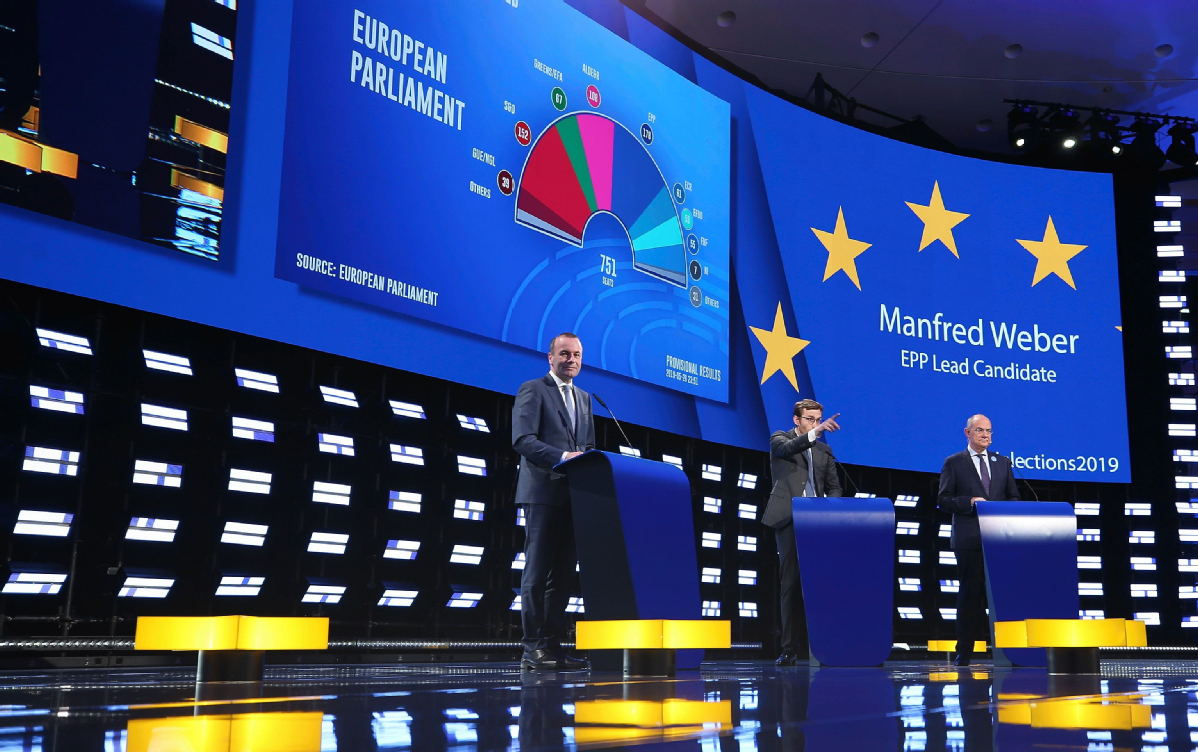 Politicians speak at the European Parliament General Assembly Hall in Brussels, Belgium, as early results of the four­day European Union election, which ended on Sunday, are released. (Photo: China Daily)

But capable and responsible leaders, who are firm supporters of the EU integration, are needed in the face of various challenges, including the surge of populists, analysts said.

The EU is supposed to begin nominating a batch of presidents for the European Commission, European Council, European Central Bank and European Parliament at a summit from Thursday to Friday.

Contests for the successor to Jean-Claude Juncker as president of the European Commission, the EU's executive arm, have been especially heated.

Filling these positions used to be easier, until the center-right European People's Party, or EPP, and center-left Socialists and Democrats, or S&D, lost their combined majority for the first time in four decades in the continent-wide European Parliament elections last month. Meanwhile, the liberal party group ALDE and the Greens gained ground.

The increased fragmentation of the new European Parliament challenges the existing "lead candidate" system, under which the lead candidate of the party group that won the most votes in the election has been favored for the European Commission presidency, said Cui Hongjian, director of the department for European studies at the China Institute of International Studies.

"The advantages of the mainstream political groups in the assembly have further declined, while the strength of some smaller party groups has risen," he said. "Thus, the game around the leaders of EU institutions will be more intense this year."

German Chancellor Angela Merkel and France's President Emmanuel Macron have conflicting ideas over who should be the next president of the European Commission. Merkel supports Manfred Weber, a German politician and lead candidate of EPP. However, liberals and Macron don't want Weber. Macron, whose En Marche party belongs to the liberal ALDE group, is backing Michel Barnier, currently EU's chief Brexit negotiator and a former French foreign minister.

Wang Yiwei, a professor of international relations at Renmin University of China, said that the process of choosing candidates this year will be" long and arduous".

"In the past, while the EPP and S&D held combined majority in the assembly, they could deciding the candidates for EU top jobs through negotiation and cooperation with each other," he said. "But now the assembly has so many new elements involved and many different demands to satisfy."

He added that the current challenges that the EU are facing, including the increased fragmentation in the next assembly, has already made big countries eager to make changes.

"In the past, the big powers preferred to exert their influence while staying behind the scenes and put someone from a smaller country on the front stage, but now they are afraid that the EU will be paralyzed or more divided if they continue doing things by old rules, so they are more willing to go to the front and exert leadership this year," he said, citing Germany and France's great effort to support their own candidates.

Zhao Junjie, a researcher in European studies at the Chinese Academy of Social Sciences, said that although from a broad perspective, Germany and France both want to choose someone who is a firm believer of European integration and will continue to advance the process of EU integration, there are specific divergence.

Macron, who is ambitious to boost EU reform, would like to put forward candidates with that agenda, while Merkel is more conservative.

"But if Macron and Merkel disagree with the other's choice, it is likely that they will end up settling again on someone from a small country in the top position of the EU, as long as he or she is a firm supporter of EU integration," he said. Juncker is from the tiny country of Luxembourg.

Sven Biscop, director of the Europe in the World Program at the Egmont-Royal Institute for International Relations, a think tank based in Brussels, said that the good news is that the names of many powerful characters are being mentioned for the top jobs.

"The EU certainly needs leadership and member states seem to be aware of that," he said.