Neither US nor Russia meet Syria cease-fire obligations: Turkish president 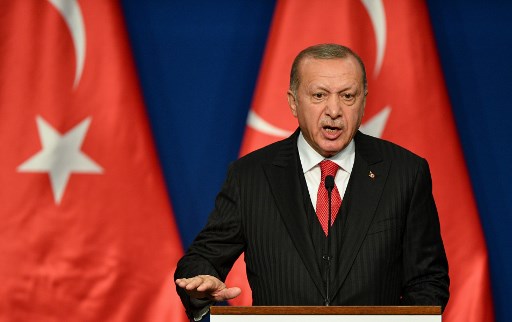 He made the remarks before departing for Washington where he will meet US President Donald Trump.

"It is impossible to say that the terrorists have withdrawn from the strip of northeastern Syria," he told reporters at the airport, recalling a deal with the United States which stipulates the withdrawal of the People's Protection Units (YPG) fighters 30 km from the Turkish border.

"I will tell him (Trump), with the use of documents, that the agreement we reached on the operation has not been fully implemented," Erdogan said, noting that the main issue in talks with the US president will be Syria.

Ankara sees the YPG as the Syrian offshoot of the outlawed Kurdistan Workers' Party (PKK).

The Turkish president also said he will prove with documents that a possible meeting of the YPG leader Ferhat Abdi Sahin, also known as Mazloum Kobani, with the US officials would be wrong.

"The documents tell about the terror attacks he has been involved," he added.

US Senators Lindsey Graham and Chris Van Hollen have asked the US State Department to issue Kobani a visa so that he could visit Washington. US President Donald Trump also had previously said that he anticipated a meeting with the YPG leader.

On Oct. 9, Turkey launched a military incursion, codenamed Operation Peace Spring, into northern Syria, in a bid to drive Kurdish fighters out of the border region, following the pullout of US troops.

The United States reached a deal with Turkey on Oct. 17, imposing a five-day cease-fire to allow the Kurdish forces to pull back from the planned "safe zone" that Turkey wants to create in northern Syria to ensure its border security.

On Oct. 22, Erdogan and his Russian counterpart Vladimir Putin held a meeting in Sochi, Russia, agreeing on the pullout of the YPG fighters to 30 km south of Turkey's border within 150 hours and the launch of joint patrols between Turkish and Russian soldiers 10 km from the Turkish border in an agreed region that excludes the city of Qamishli.