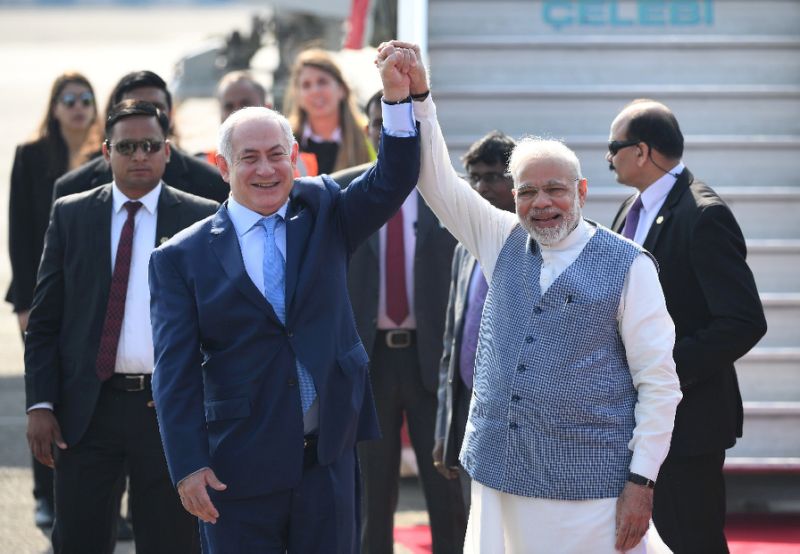 Israeli Prime Minister Benjamin Netanyahu said Monday he was "disappointed" by India's refusal to back recognition of Jerusalem as his country's capital but would not let it spoil his landmark visit to the Asian giant.

Netanyahu also vowed that Israel would "catch up" with the killers of a Jewish couple murdered in 2008 attacks in Mumbai whose son is accompanying him on a six-day trip to India.

The Israeli leader arrived Sunday at the head of the biggest business delegation he has taken on a foreign visit.

Netanyahu told the India Today media group, in an interview released Monday, that he has a "special relationship" with his counterpart Narendra Modi.

But the run-up was clouded by India joining more than 100 countries at the United Nations in voting last month to condemn Washington's recognition of Jerusalem as Israel's capital.

"Naturally I am disappointed but I think this visit is a testament to the fact that our relationship is moving forward on so many fronts," Netanyahu said in the interview.

Ahead of the visit, India also cancelled a $500 million deal for Israeli Spike anti-tank missiles.

Israel exports an average of $1 billion of military equipment each year to India, but Modi wants to end India's status as the world's top defence importer.

But Netanyahu was again optimistic on the missile deal.

"I hope that this visit can help resolve this issue because I think there is a reasonable chance we can reach an equitable solution," he said.

Declaring that no details could be given until the end of his tour, Netanyahu added: "Our defence relationship is quite significant and it encompasses many things.

"I think the keyword is defence. We want to defend ourselves. We are not aggressive nations, but very committed to making sure that noone can commit aggression against us."

Netanyahu is the first Israeli leader to visit India in 15 years.

The prime minister and his wife Sara were welcomed at New Delhi airport by Modi, who made history in July when he became the first Indian leader to visit Israel.

Modi also stressed how the "historic" visit would "further cement the close friendship between our nations".

Netanyahu expects to sign new agreements in energy, aviation and cinema production. He is to visit the Taj Mahal and Modi's home state of Gujarat as well as hold meetings with Bollywood stars in Mumbai.

But he will also make an emotional visit to a Jewish centre targeted in the 2008 Mumbai attacks, a symbolic gesture to India's tiny Jewish community.

Netanyahu is accompanied by 11-year-old Moshe Holtzberg whose parents were among 166 people killed by Pakistani militants in co-ordinated attacks on the city.

"Ultimately we will catch up with the killers but the objective is also to prevent future killers," Netanyahu said in the interview.