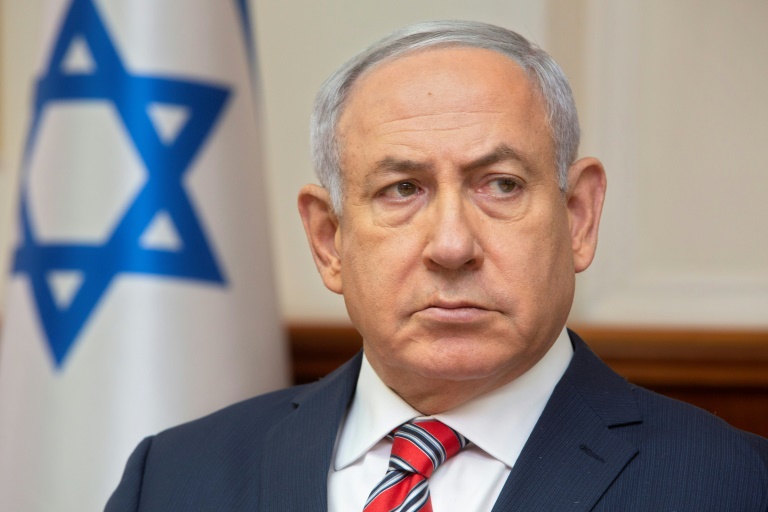 Israeli Prime Minister Benjamin Netanyahu embarks on a three-day European tour in Germany on Monday with strategic differences on Iran set to dominate as leaders attempt to rescue the nuclear deal after US withdrawal (Photo: AFP)

Israeli Prime Minister Benjamin Netanyahu embarks Monday on a three-day European tour in Germany set to be dominated by strategic differences on Iran, as leaders attempt to rescue the nuclear deal after the US withdrawal.

With partners in Berlin, Paris and London still reeling from President Donald Trump's decision last month to exit the hard-fought 2015 accord, Netanyahu is expected to seek European cooperation on a still-to-be-determined Plan B

"I will meet with three leaders and I will raise two issues there: Iran and Iran," Netanyahu said as he left Israel, calling for "increased pressure" on Tehran over its nuclear programme.

"It could be that there is not full agreement on this at the moment but in my opinion, such an understanding will take shape," he said.

Germany, France and Britain are three of the signatories of the 2015 Joint Comprehensive Plan of Action (JCPOA) between world powers and Iran, aimed at keeping Tehran from acquiring nuclear weapons.

Netanyahu, who has railed against the deal which offers sanctions relief in exchange for strict limits on Iran's nuclear activities, will hold talks with Chancellor Angela Merkel in Berlin in the late afternoon, followed by a joint news conference.

He will continue on to Paris for meetings with French President Emmanuel Macron on Tuesday and British Prime Minister Theresa May on Wednesday.

In the face of the US retreat, all three European leaders strongly defend the agreement as the best way to head off a regional arms race and have vowed with Russia and China, the two other signatory countries, to keep it alive.

German Foreign Minister Heiko Maas huddled with his Chinese counterpart Wang Yi on Thursday and insisted that Berlin "wants to maintain the nuclear agreement and make sure Iran maintains it too".

At the same news conference, Wang launched an unvarnished attack on US reliability in global affairs under Trump.

"It is a truism of international law that international accords must be respected... (and) major countries must set an example, not do the opposite," he said.

Supporters also fear the reimposition of US sanctions could hit European firms that have done business with Iran since the accord was signed.

Merkel has acknowledged that while European powers see the JCPOA as the best guarantee against an Iran with nuclear weapons, it is "not perfect".

The Europeans have proposed hammering out a supplementary deal with Tehran covering its ballistic missile programme as well as its interventions in countries such as Lebanon, Syria, Iraq and Yemen.

Western powers view Iran's meddling as destabilising for the region while Israel sees it as a direct threat to its existence.

Netanyahu said Monday that he sought agreement with European partners "on blocking Iran's aggression in the region, especially its attempts to establish a military presence against us in Syria and attack us from there".

Foes Iran and Israel have been kept at bay for decades. However, an unprecedented May 10 escalation in Syria that saw Israel bomb alleged Iranian targets after blaming Tehran for a rocket barrage has sparked fears of open war.

Israel is considered the leading military power in the Middle East and believed to be the only country in the region to possess nuclear weapons.

The visit to Germany, traditionally Israel's closest European ally due to the enduring responsibility Berlin accepts for the Holocaust, comes at a time of further diplomatic tensions.

Merkel has repeatedly criticised expanding Israeli settlements in occupied Palestinian territory as destructive to long-thwarted hopes for a two-state solution.

Berlin has nevertheless defended Israel's right to retaliate against rocket attacks from Gaza amid the worst military flare-up in the beleaguered Palestinian enclave since a 2014 war.

Netanyahu accused Iran last week of "encouraging" Hamas and other militant Gaza groups in the violence.

Meanwhile Merkel has vowed in recent months to fight a resurgence of anti-Semitism in Germany stemming from homegrown extremists and the massive influx of Muslim asylum seekers since 2015.

Alexander Gauland, a leader of the far-right Alternative for Germany, the biggest opposition party in parliament, unleashed a storm of protest at the weekend when he described the Nazi period and the Holocaust as little more than a "speck of bird shit in over 1,000 years of successful German history".