WORLD Netanyahu hits out at 'hostile' EU ahead of Bulgaria trip

Netanyahu hits out at 'hostile' EU ahead of Bulgaria trip 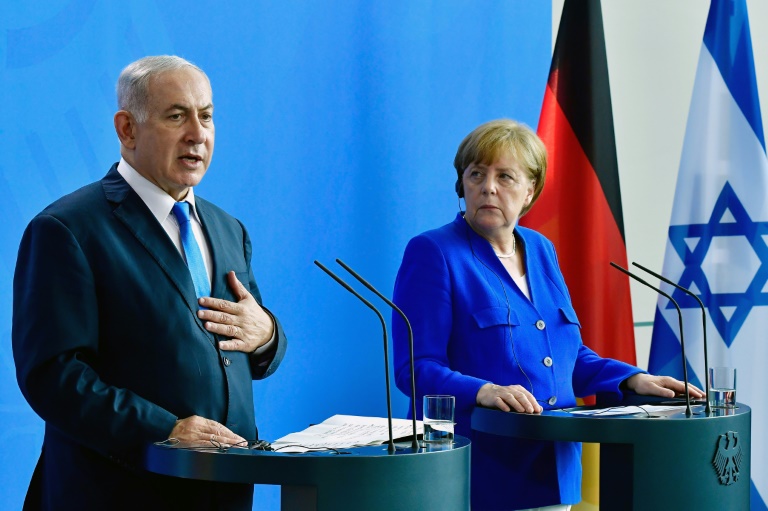 Israeli Prime Minister Benjamin Netanyahu has been at odds with European leaders including German Chancellor Angela Merkel, seen here in Berlin on June 4, 2018, particularly over the Iran nuclear deal

Israeli Prime Minister Benjamin Netanyahu criticised the EU's "hypocritical and hostile attitude" on Thursday as he left for talks with four eastern European leaders in Bulgaria.

Netanyahu has regularly made such comments against the European Union, which is critical of Israel's occupation and settlement building in the West Bank.

To counter such criticism, he has sought alliances with sympathetic EU countries including Hungary, whose nationalist stance has been a thorn in Brussels' side.

"I leave now to a summit of countries, and I will meet with my friends, the prime ministers of Bulgaria, Greece, Romania and the Serbian president," Netanyahu said.

"This is not just a meeting of friends," he added. "It is also a bloc of countries with whom I want to promote my policy, to change the hypocritical and hostile attitude of the EU."

Netanyahu made similar comments before leaving for a Baltic summit in August.

Beyond the conflict with the Palestinians, the Israeli premier has also been eager to convince European countries to exert more pressure on Iran.

EU countries have been at odds with the United States since it pulled out of the 2015 nuclear deal between Tehran and world powers and reimposed sanctions -- something long advocated by Israel.