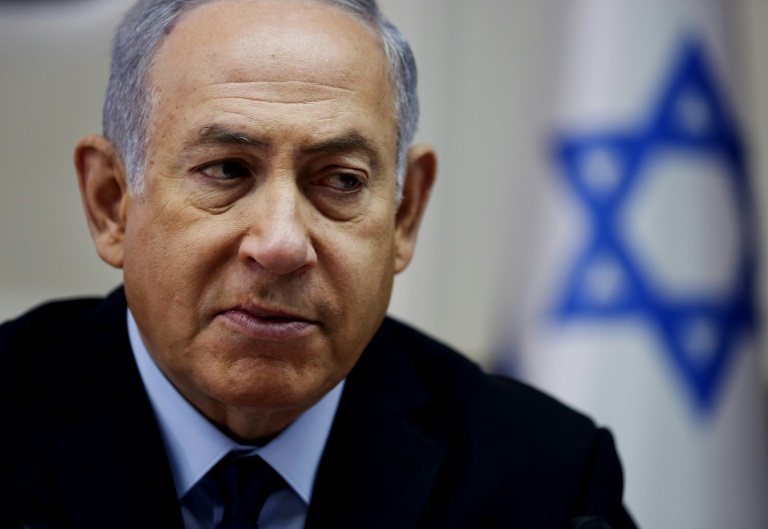 Israeli Prime Minister Benjamin Netanyahu is plotting his next moves after his defence minister resigned over a controversial Gaza ceasefire, throwing his coalition into crisis and raising the possibility of early elections

Israeli Prime Minister Benjamin Netanyahu plotted his next moves Thursday after his defence minister resigned over a controversial Gaza ceasefire, throwing his coalition into crisis and raising the possibility of early elections.

After Avigdor Lieberman announced his resignation on Wednesday, Netanyahu was clinging to a one-seat majority in parliament.

The far-right party of Education Minister Naftali Bennett, one of Netanyahu's main rivals, demanded Wednesday he be given the defence portfolio or its eight seats would be withdrawn from the coalition.

In a speech Thursday, Bennett did not reiterate the threat, but made his case for why he should be defence minister.

"The most dangerous thing for the state of Israel is that we begin to think that there is no solution to terrorism, to terrorists, to missiles," said Bennett, who heads the Jewish Home party.

"There is a solution. When Israel wants to win, we will win."

Netanyahu and Bennett were reportedly set to meet on Friday, but there were increasing signs the coalition's days may be numbered.

Another key coalition partner, Finance Minister Moshe Kahlon of centre-right Kulanu, reportedly told Netanyahu elections should be called because a stable government was needed to keep the economy on track.

Netanyahu was seeking to contain the political fallout of his decision to accept a ceasefire deal Tuesday that ended the worst escalation between Israel and Palestinian militants in Gaza since a 2014 war.

Lieberman said it was "capitulating to terror" when announcing his resignation and also criticised Netanyahu's recent decision to allow Qatar to send millions of dollars in aid to the blockaded Palestinian enclave.

Beyond that, there have been protests calling for tough action against Hamas by Israelis living near the border whose communities were targeted by barrages of rockets from Gaza this week.

A poll published Thursday found 74 percent of respondents were unhappy with Netanyahu's handling of the escalation with Gaza and its Islamist rulers Hamas, though it also showed his party would still win the most seats.

Giving further ammunition to Netanyahu's political critics, Hamas has portrayed the ceasefire and Lieberman's resignation as a victory.

Netanyahu's popularity is in large part due to his reputation as Israel's "Mr. Security", as he has often been dubbed, and he has defended his decision saying: "Our enemies begged for a ceasefire."

His Likud party has hit back at suggestions he will be forced to call elections soon, saying Netanyahu will take over the defence portfolio at least temporarily -- in addition to the premiership, foreign affairs and health portfolios he already has.

A Likud spokesman said Netanyahu was continuing consultations on Thursday aimed at stabilising his coalition.

Netanyahu did not publicly comment on the coalition crisis, but said in reference to Gaza that "we are in the middle of a campaign.

"Patience, cool and determination are necessary," he said. "We are preparing for what comes next."

There has long been speculation that Netanyahu may call elections before they are due in November 2019, particularly with police having recommended charges against him in two corruption probes.

The attorney general is expected to announce in the coming months whether to pursue charges against him, and some analysts believe he would be better positioned to combat them with a fresh electoral mandate.

But Netanyahu would want to make the move at the most advantageous time and likely not with public attention focused on the Gaza ceasefire.

The Gaza violence had erupted Sunday with a botched Israeli special forces operation inside the territory that turned deadly and prompted Hamas to vow revenge.

Palestinian militants responded with rocket and mortar fire, as well as an anti-tank missile that hit a bus that Hamas says was being used by Israeli soldiers. A soldier was severely wounded in the attack.

Around 460 rockets and mortar rounds were fired from the Gaza Strip, wounding 27 people, three of them severely.

A Palestinian labourer from the occupied West Bank was killed when a rocket hit a building in the Israeli city of Ashkelon.

Israel hit back with widespread air strikes on some 160 targets in the Gaza Strip before the Egyptian-brokered truce took effect Tuesday. Seven Gazans were killed.

The escalation came despite Netanyahu's decision to allow Qatar to transfer millions of dollars in aid to Gaza for salaries as well as fuel to ease a chronic electricity shortage.

The cash transfers and fuel had led to calmer protests along the border after months of deadly unrest.

But they also drew criticism from within Netanyahu's own government, and Lieberman slammed them in announcing his resignation.