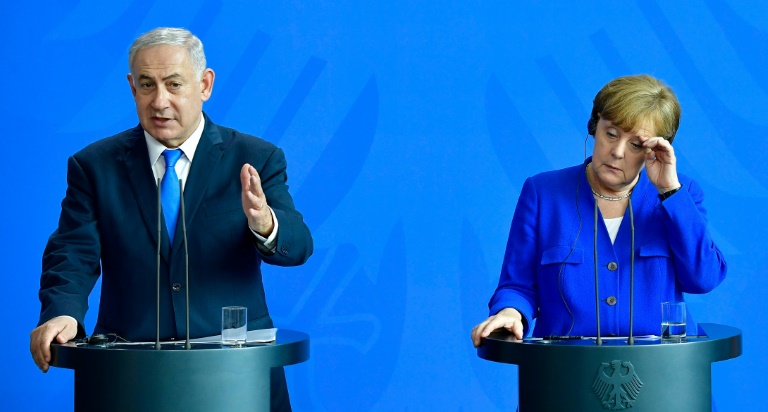 Israeli Prime Minister Benjamin Netanyahu warned German Chancellor Angela Merkel Monday that Iranian meddling in the Middle East could touch off massive new refugee flows to Europe, as they clashed about the future of the nuclear deal with Tehran.

At the start of a three-day European tour dominated by strategic differences on Iran, Netanyahu charged that Tehran has been able to bankroll a growing military presence in countries such as Syria and Yemen because sanctions had been lifted in exchange for its halt in nuclear enrichment activities.

Iran wants to "basically conduct a religious campaign in largely Sunni Syria but try to convert Sunnis," he said at a joint press conference with Merkel.

"This will inflame another religious war -- this time a religious war inside Syria and the consequences will be many, many more refugees and you know where exactly they will come," he said.

More than one million asylum seekers, with Syrians making up the biggest group, arrived in Germany since 2015, creating deep new political divisions in the country and shrinking Merkel's ruling majority in her fourth term.

Germany, France and Britain are three of the signatories of the 2015 Joint Comprehensive Plan of Action (JCPOA) between world powers and Iran, aimed at keeping Tehran from acquiring nuclear weapons.

Netanyahu, who has long railed against the deal, will continue on to Paris for meetings with French President Emmanuel Macron on Tuesday and British Prime Minister Theresa May on Wednesday.

All three countries have vowed to try to salvage the hard-fought accord since President Donald Trump announced the US withdrawal from it last month.

The European powers argue it is the best way to head off a regional arms race and have vowed with Russia and China, the two other signatory countries, to keep it alive.

Merkel insisted that the Europeans and Israel were "united by the goal that Iran must never get a nuclear weapon" but acknowledged deep differences with Netanyahu on "how we can best achieve this".

She defended the nuclear accord as ensuring "at least for a certain time, that Iran's activities are under control" noting that Tehran had been "on the brink of having a nuclear weapon" before the deal was signed.

But she acknowledged that a supplementary deal with Tehran covering its ballistic missile programme as well as its interventions in countries such as Lebanon, Syria, Iraq and Yemen was needed.

"But we believe that this can be achieved with tough negotiations," she said.

Asked about Iranian supreme leader Ayatollah Ali Khamenei's comments on Twitter Sunday calling Israel a "malignant cancerous tumour", Merkel said Germany and its partners had "repeatedly and with great clarity told Iran that we will stand up for Israel's right to security".

Western powers view Iran's involvement in its neighbours' affairs as destabilising for the region while Israel sees it as a direct threat to its existence.

Foes Iran and Israel have been kept at bay for decades. However, an unprecedented May 10 escalation in Syria that saw Israel bomb alleged Iranian targets after blaming Tehran for a rocket barrage has sparked fears of open war.

Israel is considered the leading military power in the Middle East and believed to be the only country in the region to possess nuclear weapons.

The visit to Germany, traditionally Israel's closest European ally due to the enduring responsibility Berlin accepts for the Holocaust, comes at a time of further diplomatic tensions.

Merkel has repeatedly criticised expanding Israeli settlements in occupied Palestinian territory as destructive to long-thwarted hopes for a two-state solution.

She nevertheless defended Israel's right to retaliate against rocket attacks from Gaza amid the worst military flare-up in the beleaguered Palestinian enclave since a 2014 war.

Netanyahu thanked Merkel for her efforts to fight a resurgence of anti-Semitism in Germany stemming from homegrown extremists and the massive influx of Muslim asylum seekers since 2015.

Alexander Gauland, a leader of the far-right Alternative for Germany, the biggest opposition party in parliament, unleashed a storm of protest at the weekend when he described the Nazi period and the Holocaust as little more than a "speck of bird shit in over 1,000 years of successful German history".