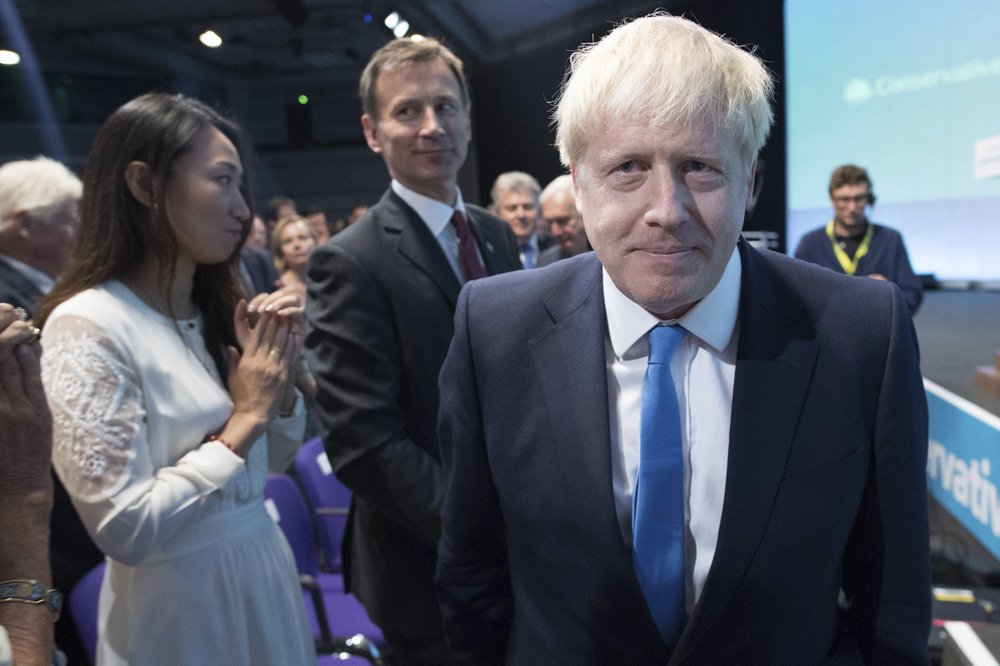 Boris Johnson walks to the stage, as rival Jeremy Hunt looks on after the announcement of the result in the ballot for the new Conservative party leader, in London, Tuesday, July 23, 2019. (Photo: AP)

The Israeli leader offered “heartfelt congratulations from Jerusalem” on Twitter after Johnson’s election Tuesday as the leader of Britain’s governing Conservative Party who will succeed Prime Minister Theresa May.

Netanyahu says he looks forward to cooperating “both in facing our common challenges and seizing the opportunities ahead.”

Johnson also received applause from the head of Israel’s Kibbutz Movement, who said in a statement that the prime minister’s time as a volunteer on a kibbutz in 1984 “left him a soft spot for Israel.”

Johnson last visited Israel in 2017 as foreign secretary and is widely perceived as having a sympathetic view of Israel.

German Chancellor Angela Merkel is congratulating Boris Johnson on his election as leader of Britain’s governing party and says she is looking forward to working well with him.

In a tweet on Tuesday, spokeswoman Ulrike Demmer quoted Merkel as saying that “our countries should be linked by a close friendship in the future as well.”

Johnson easily defeated Foreign Secretary Jeremy Hunt to win the Conservative Party leadership and is set to succeed Theresa May as prime minister on Wednesday. He has pledged to take Britain out of the European Union by Oct. 31, with or without a deal.

The prime minister’s office said Abe, in his congratulatory message Tuesday, told Johnson he hoped to closely cooperate with Britain in tackling security, defense and other international issues, while further deepening their countries’ bilateral friendship.

Abe expressed high expectations for Britain to lead free and active economy in Europe and the global community, while listening to business interests that includes Japanese companies to mitigate the impact of Brexit.

Abe said Japan hoped to see Britain’s orderly exit from the EU based on an agreement, which he said would contribute to minimize Brexit’s adverse effect on the world economy and Japanese businesses in Britain.

In a message posted on Twitter Tuesday, Erdogan congratulated Johnson who won the campaign for Britain’s Conservative Party leadership and is set to replace Theresa May as prime minister.

Erdogan wished Johnson success in his new job and added: “I believe that the Turkey-United Kingdom relations will flourish even more during this new era.”

Johnson, who has part Turkish ancestry, received a warm welcome in Turkey in 2016 when he visited as foreign secretary despite the fact that he had based his Brexit campaign on the possibility of Turkey joining the EU and millions of Turks entering Britain. He has also composed an offensive poem about Erdogan.

Von der Leyen said Tuesday she was looking forward to a good working relationship with Johnson following his victory in the Conservative Party leadership battle.

With Britain scheduled to leave the European Union on Oct. 31, von der Leyen says, “We have the duty to deliver something which is good for the people of Europe and the United Kingdom.”

French President Emmanuel Macron, hosting von der Leyen on her first visit to an EU country since her recent election to replace Jean-Claude Juncker on Nov. 1 as head of the EU’s executive commission, said he wants to work “as quickly as possible” with Johnson, not just on European issues but on Iran and international security, subjects in which France is closely linked to Britain and Germany.