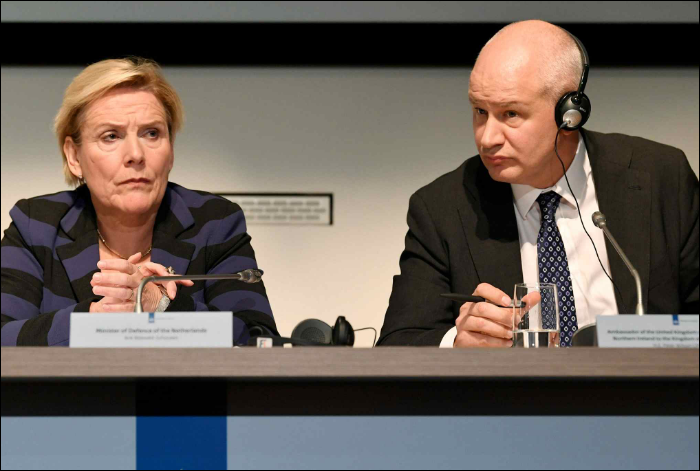 "The Dutch government finds the involvement of these intelligence operatives extremely worrisome," the minister told a news conference, calling on Russia to cease its cyber activities aimed at "undermining" Western democracies.

The Russians set up a car full of electronic equipment in the car park of a hotel next to the Organization for the Prohibition for Chemical Weapons (OPCW) in The Hague in a bid to hack its computer system, Bijleveld noted.

Dutch Major-General Onno Eichelsheim said the spies were caught red-handed and attempted to destroy some of their own equipment to conceal what they had been doing.

They had planned to travel on to a laboratory in Spiez, Switzerland, used by the OPCW to analyze chemical weapons samples, he added.

A source at Russia's Ministry of Foreign Affairs said on Thursday that Dutch allegations were absurd, the RIA news agency reported.

"There was no attack," RIA cited the unnamed source as saying, adding that the allegations stemmed from a Western campaign against Russia.

"We are part of all the organization's (OPCW's) structures so why would we hack it? We have access, their entire network is open to us. This is another absurdity."

Britain also accused Russian military intelligence the same day of directing a host of cyber attacks aimed at undermining Western democracies by sowing confusion in everything from sport to transport and the 2016 US presidential election.

"This attempt to access the secure system of an international organization working to rid the world of chemical weapons demonstrates the GRU's disregard for global values and rules that keep us all safe," British Prime Minister Theresa May and her Dutch counterpart Mark Rutte said in a joint statement.

In response to their claims, Russia's embassy to London said in a statement on Thursday that British accusations lacked proof and were part of a crude disinformation campaign.

"This statement is irresponsible," the embassy said. "As is traditional, it is not backed by any proof and is another element in an anti-Russian campaign being conducted by the British government."

"This aggressive act demonstrated contempt for the solemn purpose of the OPCW, which works to eradicate weapons worldwide under a United Nations mandate," they said in a statement.

US: Russia must pay a price

US Defense Secretary James Mattis said on Thursday that Russia must be held accountable for its attempts to hack the OPCW.

Mattis told a news conference that Russia must pay a price and a number of response options were available. He said he agreed with the determination made by the British and Dutch recently.

Canada said Thursday it too was targeted by Russian cyber attacks, citing breaches at its center for ethics in sports and the Montreal-based World Anti-doping Agency, after allies blamed Moscow for some of the biggest hacking plots of recent years.

"The government of Canada assesses with high confidence that the Russian military's intelligence arm, the GRU, was responsible" for these cyber attacks, the foreign ministry said in a statement.