Chinese netizens are demanding an explanation from the US as its president revealed that the US started to develop a candidate for the first COVID-19 vaccine on January 11. Despite this, US politicians still attempt to blame China for its own failures while having earlier knowledge of the impending epidemic. 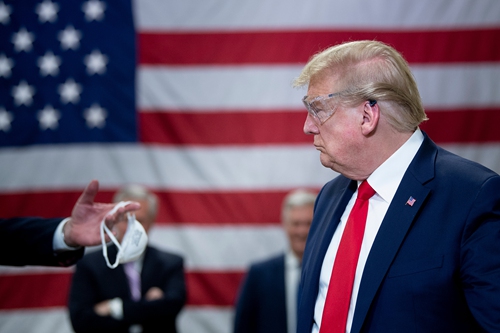 As US President Donald Trump boasted about vaccine development on Friday, he personally revealed that the US lied about the COVID-19 pandemic in the first place by saying that US scientists had begun developing the first vaccine two months before the outbreak in the US initially occurred.

"Think of that, within hours of the virus's genetic code being posted online. So, January 11th. Most people never even heard what was going on January 11th. And we were out there trying to develop a vaccine, not even knowing what we were up against," Trump boasted.

"Trump's personal speech revealing his administration's intention to use China as a scapegoat for the spread of the virus in the US is 'groundless' with him only trying to divert public attention from its own failures," Li Haidong, a professor at the Institute of International Relations at the China Foreign Affairs University, told the Global Times on Saturday.

Trump's speech angered Chinese netizens, with many saying that the Trump administration did not adopt a timely response and caused current failures of controlling the deadly virus domestically with the US trying to use China as a scapegoat.

"Does it mean the US admits the virus was first found on its shores?" "Please give us an answer," Chinese netizens commented.

The date of January 11 means that research began two months earlier than the initial reported outbreak in the US in mid-March. The first confirmed coronavirus case reported in the US was on January 21, also earlier than the date that the US conducted its first virus candidate.

An article published by Business Insider on May 12 also questioned the US potentially hiding the epidemic titled "the US probably had coronavirus in December, but was too busy watching China to notice."

China shared genome sequence information of the new coronavirus with the World Health Organization on January 12, which sounded the alarm of prevention to the world.

"US politicians criticize China's words and deeds as the virus engulfs it, he knew the relevant viral information, but he did not prevent it in advance, or sound the alarm to the public, which has eventually led to millions of US people being deeply affected by this catastrophe" Li said.

Hiding information about vaccines and using them as a strategic asset, the Trump administration may further hinder the global effort in coping with the virus, Li warned as the US may feel reluctant to share its vaccine's research and development with the world