WORLD Neutral pronoun 'they' chosen as word of the decade

Neutral pronoun 'they' chosen as word of the decade

The neutral pronoun "they" has been voted word of the decade by U.S. language experts, beating out other contenders that included "climate" and "meme." 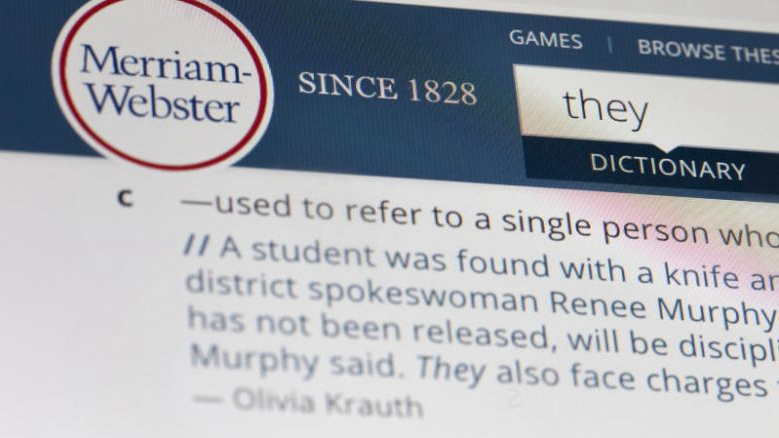 "They" is used in English by a growing number of non-binary individuals, people who do not identify as either male or female. They prefer the plural neutral pronoun to bypass the traditionally male "he" or female "she."

"When a fundamental part of language like pronouns becomes a vital indicator of trends in society, linguists prick up their ears," said Ben Zimmer, head of the American Dialect Society, which studies the evolution of language.

He added in a statement Friday (January 3) that the Society's selection of "they" was an indication of "how the personal expression of gender identity has become an increasing part of our shared discourse."

The recognition comes after U.S. dictionary Merriam-Webster in December named "they" its word of the year.

Non-binary people are enjoying increased representation on television and in pop culture.

Among them is British artist Sam Smith, who recently revealed a preference for "they/them" pronouns "after a lifetime of being at war with my gender." Tech giant Apple has added "neutral" emojis that don't distinguish between gender to the latest version of its operating system.

The American Dialect Society had previously named "they" word of the year in 2015.

Other contenders in the decade category, which is not limited to a single word, included #BlackLivesMatter, #MeToo, climate, emoji, meme, opioid crisis and woke, the Society said.

They previously chose "google" and "web" as words of the past two decades.